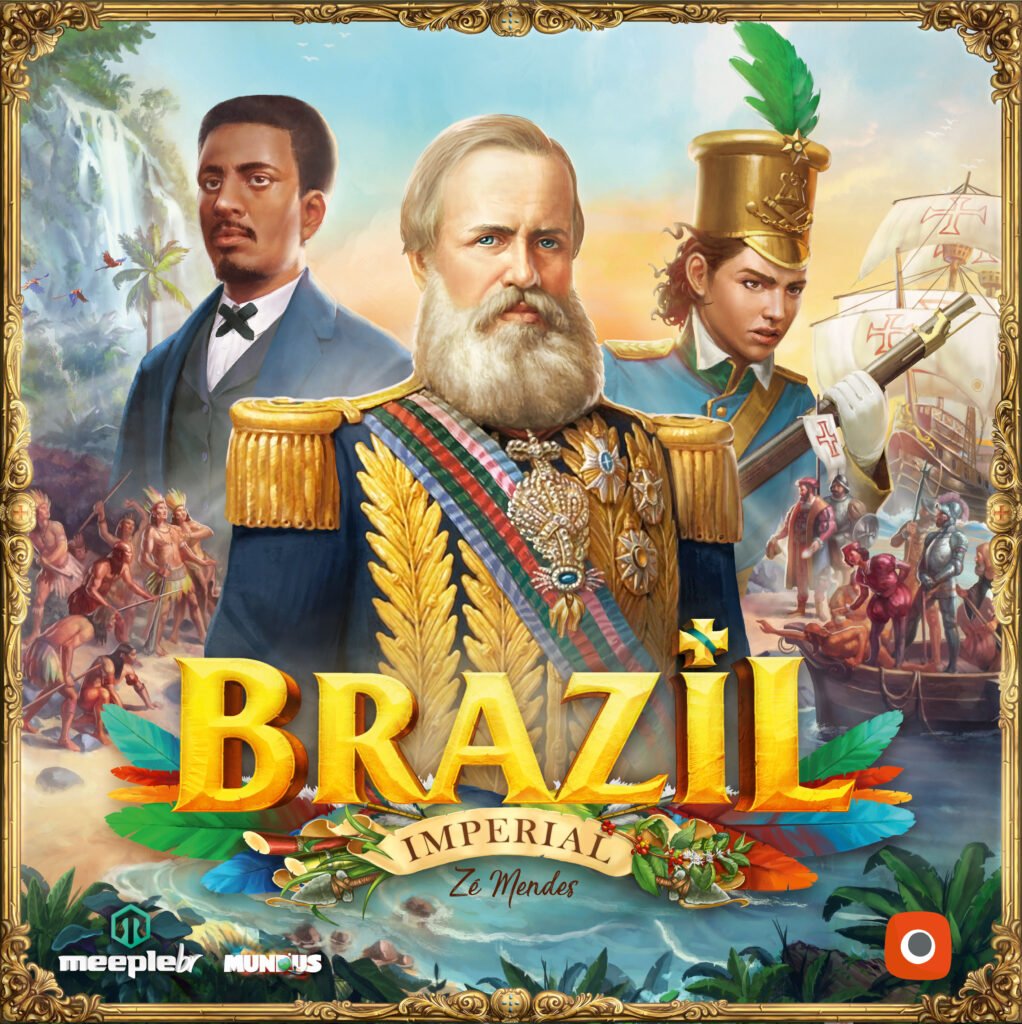 Portal Games is excited to announce that we’re bringing the hit game Brazil: Imperial to the North American market. Originally published by MeepleBR, we can’t wait for American gamers to get this great game at their friendly local and online stores. Brazil: Imperial is a fast-paced 4X euro game, designed by Zé Mendes, with rich historical ties to Brazilian history and the evocative art style created by Carlos Eduardo Justino, Vinicius Menezes, and Tom Ventre.

Brazil: Imperial is a game for 1-4 players introducing a new concept of the “euro X” game—combining a euro game, in which players collect and manage resources, with a 4X game, where players explore, expand, exploit, and exterminate.

The gameplay is set in Brazil between the 16th and 19th centuries and is strongly tied to rich Brazilian history by bringing historical figures to the game. Each player takes on the role of a monarch working to build a prosperous nation and advance it throughout 3 eras. Players send military units to explore and defend their territory, construct and renovate cities, farms, and mines, produce and trade resources—wood, sugar cane, cotton, and coffee, and acquire the support of historical figures from Brazil’s past to receive special powers.

The game is played on a modular map and offers 8 different scenarios with various map setups recreating regions of Brazil, which are each well-tailored to different player counts. In every game, players can focus their strategies on resource management, combat, or a combination of both, depending on their choice of monarch, the map, and the interaction with the other players.

Brazil: Imperial offers players a spectacular visual and tactile experience, as well as captivating historical background. The evocative art depicts famous historical figures of Brazil, and each is described in a separate booklet included with the game. All the buildings, units, and cities are represented by uniquely shaped wooden markers making the game a feast for the eyes.

Brazil: Imperial is the second game that Portal Games is co-publishing to bring into the American market, the first being the bestselling Gutenberg. It confirms Portal Games’ new path as a company that is not only developing and marketing its own titles but also distributing the great products from the other publishers to North America.

“Our top priority is to deliver the best product portfolio possible to our American fans, and to include games celebrating cultural diversity from around the globe,” said Ignacy Trzewiczek, President of Portal Games. “We are excited to introduce this wonderful game to a wider audience”.

Founded in 1999 as a tabletop RPG publisher, Portal Games began to produce high-quality board games in 2007 and soon became one of the major tabletop game publishers in the world with award-winning titles like Detective, Empires of the North, Imperial Settlers, Robinson Crusoe, and Stronghold in their esteemed catalog. Over the past decade, our game design team lead by Ignacy Trzewiczek has won more than 100 industry awards and nominations, including Kenner Spiel des Jahres, Golden Geek, International Gamers Award, The Dice Tower Award, and multiple Game of the Year awards across the globe.

MeepleBR is a Brazilian publisher founded in 2016 by friends passionate about board games. Since then, they have worked every day to promote board games, card games, and RPGs. They believe in the power of fun, especially with exciting and clever analog games, and the importance to fortify the human bounds in a cold digital era.

In the first years, they prioritized translating great foreign games, like Terraforming Mars in a partnership with FryxGames, Orléans with dlp, and Root with Leder Games. Now they’re working on developing young and talented Brazilian game designers. As part of this project, they launched Triora (2018), Paper Dungeons (2020), and they have more titles in develop process now: Brazil Imperial (2021), Luna Maris (2021), Eletrika (2021), Grafito (2021) and 1890: – National Railroad Plan (2022).