Some people can thwart even Moloch’s and Neo-Jungle’s plans. Those here used to sail on ships, but switched to motor boats. They are always hungry for riches, good rum and (above all) picking a fight. The pirates are coming to kick some landmen’s asses! 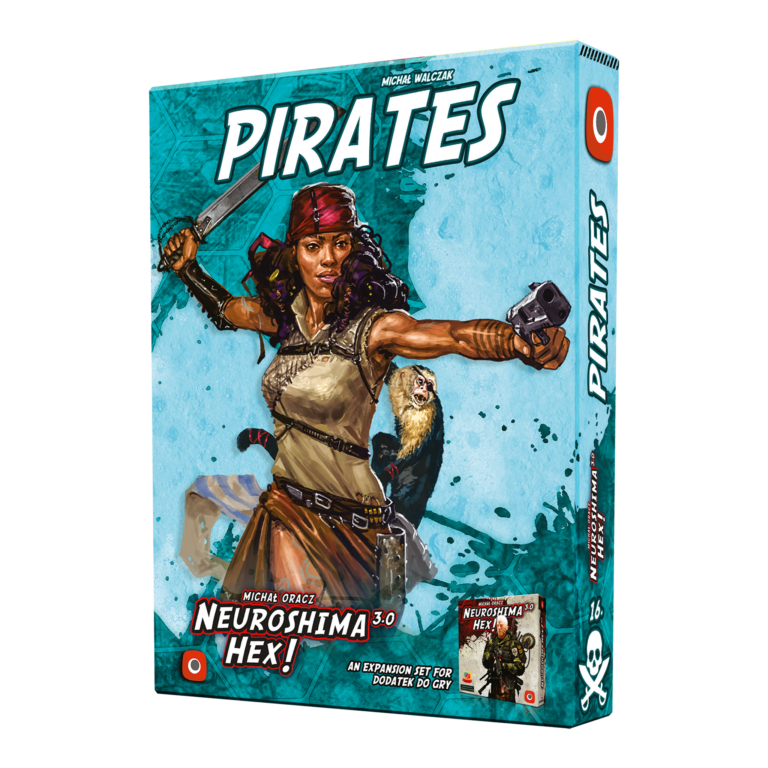 The salty dogs are ready to board and need a skilled captain! Pirates is the next expansion to the legendary game about the post-apocalyptic world of Neuroshima. The new army plays on unprecedented rules, extending the standard Battlefield with special Water Spaces that only Pirates have access to. The large quantity of battle tiles allows them to control the pace of the game, which is crucial when it comes to planning the location of the headquarters throughout the whole game. You will play the Pirate Army without the Expanded Battlefield rules (5 and 6 player games, or expanded 4 player games).

When you open the box, you will find 35 Pirate tiles, including Smugglers, Boatswain, Water Gun, and even a Crocodile! You will use 12 Water Adjacency tokens to create your unique Battlefield with Water Spaces. In addition, you will also find 3 Wound markers, 1 Net marker, 2 Pirate markers and a replacement tile.

How to make a decent boarding?

Remember that Pirates (probably because of rum) are characterized by low Initiative and lack of Toughness, as well as the negligible Mobility of non-floating units. A good tactic for Pirates is to focus on Drift. Placing units in places where the headquarters drifts for the indicated number of Battles will allow the player to plan tactics for each stage of the game.

You will find many powerful units in the Pirate Army. By placing the Bosman on the Battlefield, the player can automatically Initiate a Battle and the Crocodile may move to the space previously occupied by the destroyed unit. Moreover, the damage inflicted by the Water Gun depends on the distance of the enemy – so an adjacent target gets 3 Wounds!

In the Pirate army you will also find an Implant. An Implant is a new type of unit, depicting additional actions a player may perform during their turn. Once per turn, a player may activate one Implant placed on the board that belongs to their Army. For example, thanks to the Tavern Implant action, Pirates can immediately start a Battle which is resolved according to the standard rules. What a swashbucklers of these salty dogs…