It’s time to shoot the next blockbuster!

There are two goals: it must check all the boxes and earn a lot of money! Hollywood writers get busy. Creating an interesting story is a real challenge, especially when the producer constantly asks about progress … 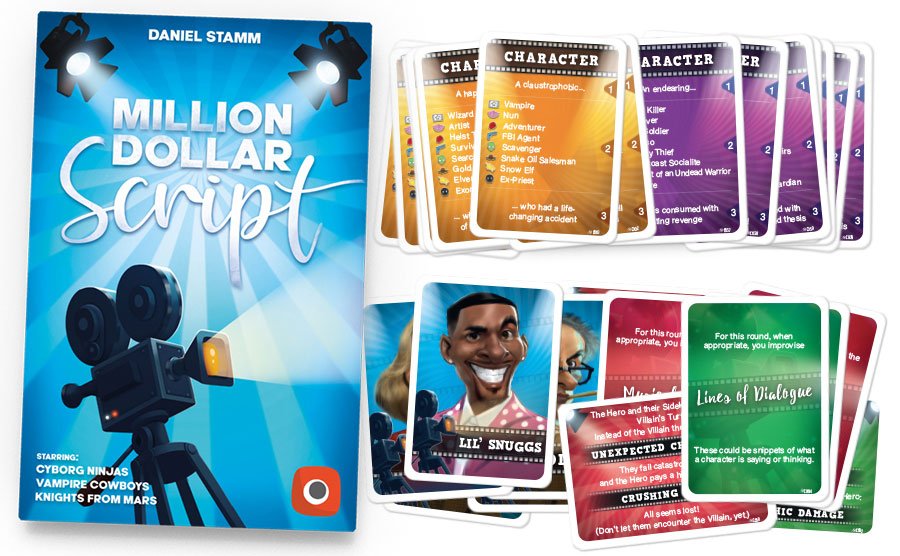 Million dollar script is a party card game for 3-10 people. You will play as teams of writers competing with each other for the right to release the box office blockbuster. One of you will become the producer who evaluates both teams and decides which script will be used and which will be disposed.

The producer will ask questions about the film, to which the writers must give a satisfactory answer. Each of the producers has a specific taste that you must fit into as soon as possible. But don’t deliberate for too long! Because as the Hollywood saying goes, “If you’re not ready, you’re not worthy!” It’s gonna be a great movie!

The players are divided into two (or three) competing Scriptwriters teams in the Million Dollar Script. The task of each of them is to create a script that will become a cinematic hit. One of the players will play the role of the Exec, who will judge which idea for a movie he likes the most.

The game consists of 5 rounds, each of which is divided into 4 phases. During the Briefing phase, the Producer reads one of his Exec Pitch cards. There is an excerpt from the plot and two questions for the film, such as “What is the Villain’s Evil Goal?” In the Brainstorm phase, the Screenwriting teams discuss their answers to share their ideas in the Pitch phase.

The player who plays the Exec takes on the role of one of the Exec Persona cards. Each Exec has different movie preferences that Scriptwriters must fit into. In the Verdict phase, the Exec will decide which team’s idea for the movie he likes more. This team gets 4 Victory Points. However, the losing team can also get a VP if the Exec decides to buy some of their ideas from them.

At the beginning of each game, players also choose the Genre they will create. It can be a Crime, a Drama, or a Western, but we recommend a Blockbuster, which combines themes from various other genres for beginners. Only in a Blockbuster, you can come across a dragon with a chainsaw flying away towards the setting sun!