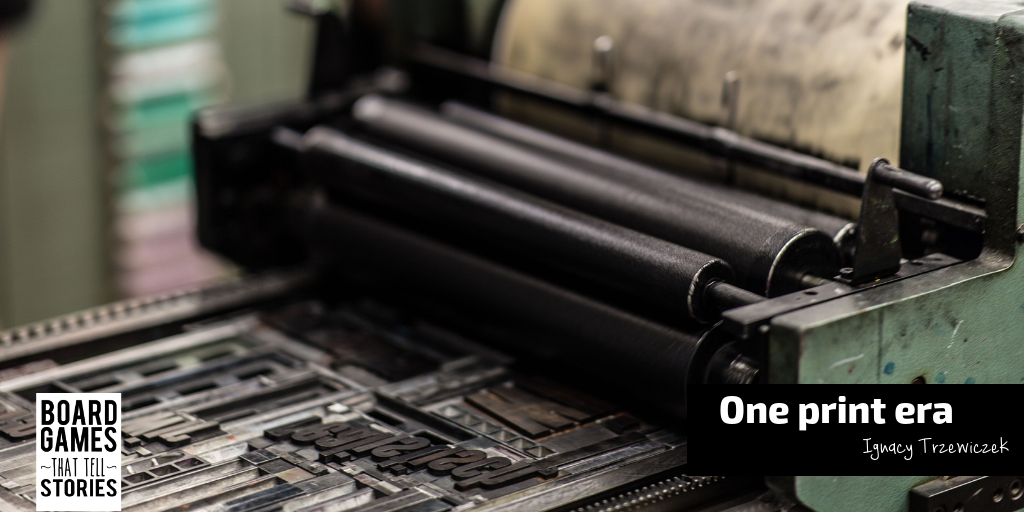 A few weeks ago Lacerta, one of the publishers in Poland announced the list of recently released games they won’t reprint. It was a very clear message they send. “Hey, if you want one of these games, it’s now or never. We are not going to print them again.”

It resonated with the recent discussion I had with Luke. We talked about my favorite games and I told him that Lewis & Clark is one of the 5 best games I ever played.

“I never heard of it”, he said. Of course, he hasn’t. The game was released 5 years ago. In board games, it’s a decade. Never reprinted, no longer available, lost in time. One of the best euro games. Covered with sands of time.

That’s the state of the industry we live in today. In general, publishers don’t announce it in such an open way, but I guess you already figured it out. Publishers don’t do reprints. We live in a one print era. Print and forget. I had this devastating conversation in 2017 when I was stuck in the airport for a few hours and luckily I got stuck with one of my publisher friends. We talked about the industry for a long time that afternoon. He mentioned a game they released (sorry, folks, but it was private talk, so I’ll mention no names and titles) and had an epic opening and got great hype. They had a hit! Immediately they decided to do a reprint. It is 8 weeks to reprint a game, it is 8 weeks to ship it from China, it is 2-4 weeks to put it back into distribution.

When the reprint arrived, nobody was interested in the game anymore. Eyeballs and attention moved to the new shiny. My friend’s company – after great success with the release of the game – ended up with a warehouse full of reprint nobody wanted now. They lost a ton of money.

It’s against my DNA, it’s against my philosophy. I do love titles I put out. I do believe Robinson Crusoe, Imperial Settlers, Cry Havoc, Tides of Time, and other our games are today as good as they were 2, 3 or 5 years ago. I struggle and fight. For the past few months, we had devastating debates with distribution about the reprint of 51st State. Every day, every single day we receive emails from fans who ask when the game is going to be reprinted. And every time we talk with distributors and ask about orders, about their estimation, they say “No, thank you, we won’t order.” It’s an old title for them. They are not interested in putting it back on the shelf. It’s not even gamers looking for the new shiny. It’s the whole industry looking only for the new sell sheet.