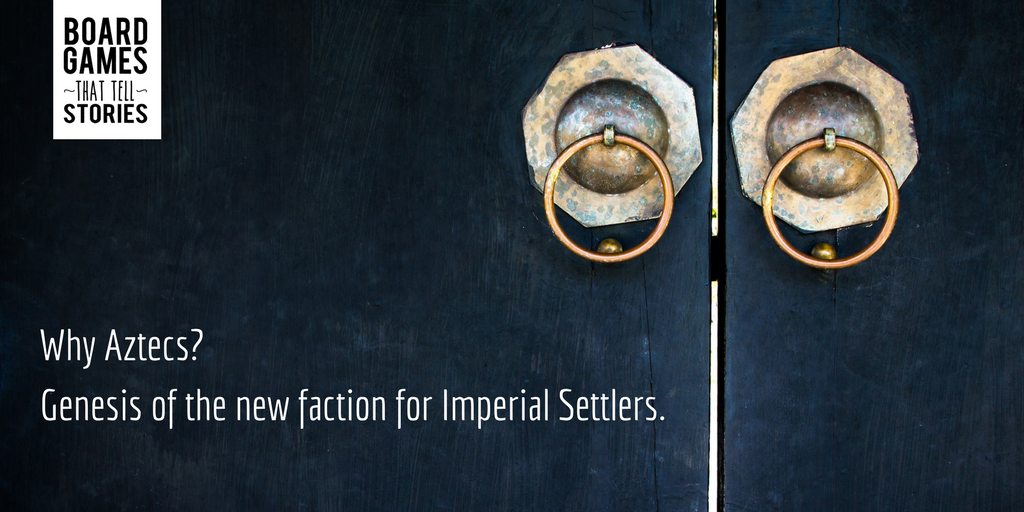 From day one after the release of Imperial Settlers I was openly saying that we have a 3-year support plan for the game – and by saying that I meant that we had three more factions already planned and would release them. And then we would see what happens.

Today, after releasing two expansions, I must say that none of them – Atlanteans and Aztecs – were in my initial plan. Both of them were born later, after the game was released – and both of them surprised me and gave me a lot of joy.

The story behind Atlanteans is widely known, I talked and wrote about it in many interviews and articles. One of my employees just approached me and said something like: ‘That would be cool if you designed Atlanteans and they would sink at the end of the game.’ A few months later he had his Atlanteans on the table.

What’s the story with Aztecs?

It all started with reviews of Imperial Settlers.

When I was designing the game, Imperial Settlers was always an engine building game, pure and simple. You have your cards, you build your combos, you create synergies, and – boom, you crash your opponent 82 to 47. Production buildings, feature buildings, and action buildings – all were like small cogs to build a perfect scoring machine.

And then I read the reviews. It turned out that a very strong theme that came with the game, the fact that we played with four very thematic factions, took the game from an engine building card game and put it in a ‘simple civ game’ basket. That was unexpected. I was debating with reviewers … in my head. ‘There is no technology tree. There are no religions. There are no leaders, culture paths … It is no civ game, for God’s sake!’ I was saying that … in my head.

Seriously, though, I was not going to tell them that my game is not that awesome as they say and it does not deserve to be put into the civ games basket.

Rather than opposing all this for the sake of my own view, I started to wonder if I could perhaps make Imperial Settlers more civ-like and if this was possible to truly make it a cute and simple civ game.

And then the Atlanteans happened.

Civ games have a technology tree. There was no place for that in the game, but with the Atlanteans, I was able to add at least a bit of this cool theme and feeling. Three simple tokens that worked on the existing cards and made them work better. Simple and add a civ flavor.

That was the first step. That made me think about the second step. Religion.

Adding temples, gods, monks, priests was a very intriguing idea. Lots of vivid images in my head, lots of ideas for cards and abilities. Egyptian gods, Roman gods, mythology at its best. That was a very tempting second step. And a very risky one…

***
Issue number one. Religion itself.

I didn’t want to offend players and let’s be honest – people get very easily offended when we talk about religion. It was a risky ground. From the very beginning, I wanted rules that were somehow similar to rules governing religion in an old RPG called 7th Sea. Let me quote the chapter about Faith:

‘You aren’t really sure what this Advantage does. In fact, it may not do anything at all. Is it worth it? You’ll just have to exercise some faith and find out.’

I decided to use the push-your-luck mechanism as the religion mechanism. I wanted to try to make it random, to make it one of those ‘you never know’ things. On the one hand, I found it super thematic and cool, that using a Prayer action will always have an unknown outcome. On the other hand, I was afraid that it might offend somebody’s feelings. It’s just a game, these are just cute little Settlers, but I knew I was really walking on thin ice.

Merging religion with the push-your-luck mechanism was a risky move.

To be honest, I don’t remember how I stumbled upon Aztecs. Was it the idea of a fan? Something one of my playtesters suggested? I honestly don’t remember. What I know, what I remember is the fact that I very quickly realized they matched the idea of religion. They were the faction that would bring altars, temples, ceremonies, and prayers.

And blood. Lots of blood.

We spent an insane amount of hours discussing what to do. Asking illustrators for sketches and their ideas for cute Aztecs. We were desperately looking to making these rituals look cute and remove any blood and gore scenes from the game. And although many Aztec buildings have a worker as a cost (which is sort of a human sacrifice), although the faction does not produce shields (the Aztecs are easy to raze), although I put many small details and pieces to make this faction sort of true, we put just as much work to keep the game family-friendly and preserve the spirit of the Settlers universe.

Finally, the Aztecs were released. None of the issues I was afraid of became a case. It looks like we were delicate enough to not tread on anybody’s toes. This is – as I needed it to be – a cute and funny faction that merely introduces a new mechanism to the game and doesn’t hurt any feelings.