The car that chauffeured the USSR Air Force general Anton Korolkov stopped at the main gate of the Innsbruck-Amras cemetery.

“You should stay in the car, sergeant,” Korolkov ordered his driver and got out.

From the back seat he took a large wreath decorated with gold ribbons. It was pleasantly chilly outside. Snow caps on trees and bushes that surrounded the cemetery sparkled in the sun. There wasn’t another soul for miles. “Everyone is probably waiting for the Four Hills Tournament to start,” he thought.

A black Opel, the car belonging to the friends from the embassy, parked a little farther off. Behind them was an Austrian police car, undercover as well. Korolkov smiled.

He entered the cemetery and went straight to the graves of the fallen Soviet soldiers. He used to come here whenever he could. He saluted the memorial of a five-pointed star and turned toward a side path. He stopped at one of the graves, took out a brush from his bag, and began to sweep the snow from the stone tablet. A few minutes later, he revealed cyrilic writing: Anton Szauszkin, the Soviet Union hero. Died for the freedom of nations and his homeland. The general laid the wreath and readjusted the ribbon.

“Hello, my friend, I came to ask for forgiveness.”

He crouched and bowed his head.

“What I did to your son was terrible. He’s a good boy. You’d be proud. Just like me. He’s smart, good-hearted. But it’s what I had to do, I didn’t have a choice, you know? I’ll explain this to you soon, and I hope you’ll understand why I sent him to die. There was no other way, Anton, I swear. I swear. Just like with that son of a bitch from SMERSH. We did what had to be done.”

Memories returned. Wide-open eyes of a raped Austrian girl. How old was she? 14? The laugh of an NKVD captain, as he fastened his pants. Sounds of quick steps behind him and Szauszkin swinging an axe. It was some village. Their unit occupied a few huts. They were cold and hungry, it was an icy hell. They were chopping wood. Korolkov remembered the screams, the blood spouting on his face, and a wave of blinding heat. The screams ceased, but Anton was still mauling the son of a bitch. They buried him at night.

Korolkov heard the scrunching of snow behind him. Steps. A ghost? He felt a pang of anxiety and turned around.

In front of him stood a very tall, young man with a short haircut. A serviceman, certainly. He held his hands in the pockets of a green military jacket. Did he have a gun? The confusion on the boy’s face was hilarious. He probably wasn’t expecting to meet a Soviet general.

“Oh, I’m sorry, sir,” he stuttered in German. “Do you happen to know where I can find other soldiers? American soldiers? I’m looking for someone. I can’t find him, but I’ve read he’s somewhere here.”

“Your grandfather?” asked Korolkov in German as well. He winced. He never had a talent for languages, and he hated German. Besides, he always believed that the familiarity with this language could be limited to “Hände hoch.”

“No. It’s complicated. My mother’s husband. Kind of. He was buried here after the war.”

That was weird. Unsettling. Are they making contact? Framing him? He had to remain calm. He raised his hand.

“Go ask there, son. Red house. The caretaker lives there.”

“Thank you, sir.” The boy wanted to salute, but he refrained halfway through the gesture, turned on his heel and walked away. The boy looked around, stopped at other graves, and checked their inscriptions.

Korolkov observed him for a moment, but a few minutes later was back in his car driving toward Vienna, and further on to the East. 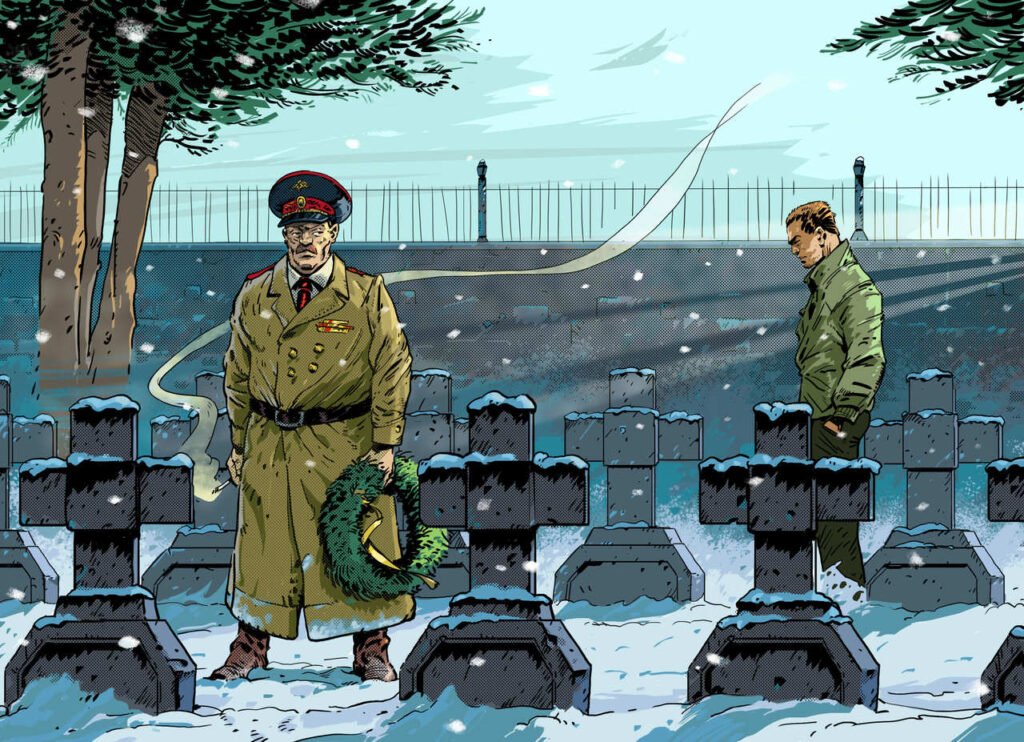