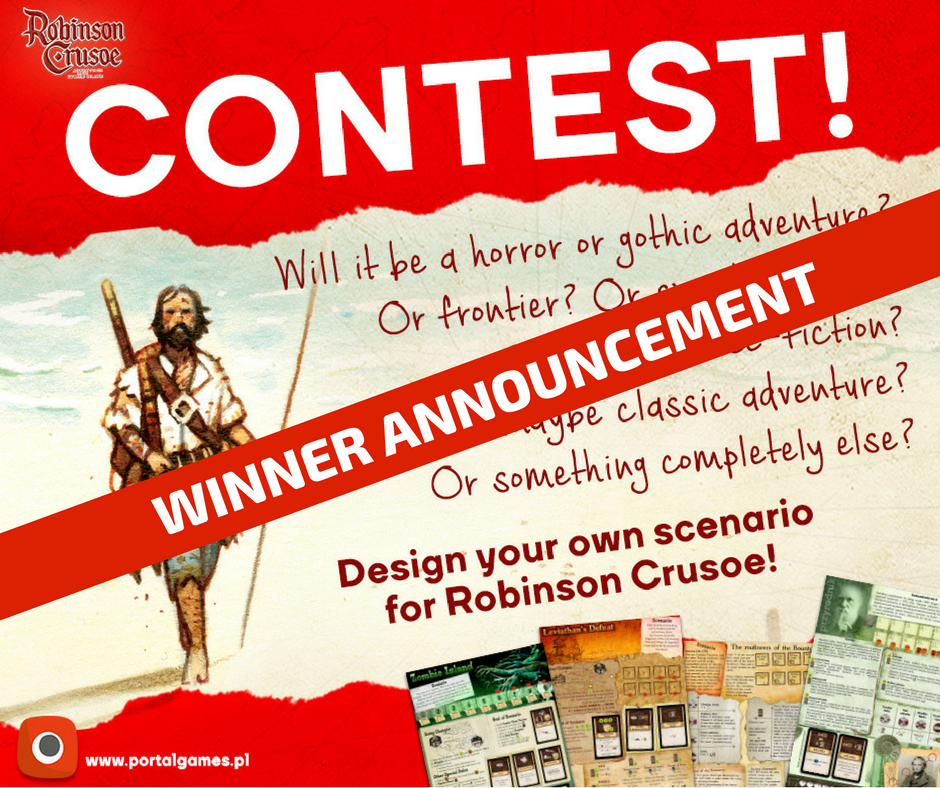 A few months ago we started the contest for the fan-created scenario. Since its release in 2012, Robinson Crusoe was lucky to have a ton of fan-created content. We encouraged players posting template files to make it easier for fans to build a scenario that looks just like the original one. We hoped for your creativity and man, we were not failed. There are so many amazing ideas on BGG.

Last year Portal Games released a new edition of Robinson Crusoe and since then we increased promotion of the game. One of the ideas we had was to give shout out to all creative fans of the game.

We received 12 entries. To be honest, we expected some poor ideas and good ones, we knew that it is going to be a crazy mix of different missions, some of which are poor and bad, some average, and we hoped that among them we will find the pearl, the one that will surprise us.

We were wrong. We were so wrong.

After I read all scenarios, and then checked the grades I gave it turned out that the lowest grade I gave was 3+ which translates into D+, which is above average, it is average but with +.

I liked every single one. Every entry was good. That was an awesome feeling.

And that’s just beginning. Because in the search for the pearl I also faced unexpected – there were 4 (four!) missions with A grade. The entries were phenomenal. I read it with a smile on my face and I felt amazing – I was reading a fascinating content to my very own creation. That was so cool.

I somehow felt also so of these people who sent in their scenarios. They put their ideas on the paper, they tested them and then sent to me. It was probably a pretty big deal to send something you created to the author of the game and see what he will say. Each of the creators should be proud. Each of the scenarios was interesting.

Finally, I also felt amazing, because I knew we have a great content to publish and offer to the fans of Robinson Crusoe. Each of these missions probably needed some additional work and polishing but overall, we got a pack of great stuff for Robinson Crusoe fans.

Let me talk about the entries.

Gentelmen o’fortune was the first one we received for the contest. It introduces a very interesting concept of players having two ways to win scenario. They know pirates are coming toward the island and during the game, depending on how they feel about it they can either prepare and fight pirates and then win or rather build a raft and escape from the Island without any combat! Quite an interesting idea and for players important moment to make decision what to do. Fight or run? The scenario was sent by a fan from Lithuania and his name was Ignatius!

Then we received Flying Machine scenario from Hubert, Polish fan of the game. It is a full blown steam punk take on the Robinson. Crazy scientist crashes on the Island and players will have to help him fix the flying machine, they will have to find fuel on the island and on top of that, take care of the scientist – like Jenny, crazy scientist is Non-Player Character that you must save. Only he knows how to fly! Super thematic mission and steampunk, science – that’s very much in the spirit of Julius Verne!

And then there was a Naval Battle mission. OMG, I loved that story. Players were taking part in the naval battle, the ship is hit very strong and the crew lands on the Island to fix the mast, and repair some damage. The problem, the battle continues and each time players draw [book] event, there is bombardment on the Island and random tile gets some serious damage. You don’t want to have your shelter on that tile! Once again, super thematic mission, with cannon balls flying all over the place when you repair the mast.

Then we received scenario from Poland again, from Sebastian. The mission is called Voodoo Island and has a very dark and disturbing theme. In this mission, players were on the ship that transports slaves. During the travel imprisoned shaman cast a dark spell. The ship runs aground, players are affected by dark magic and slaves escape. Players must get rid of the spell and catch slaves. The theme is very dark. As with the first entry, this one also has two different way to end. When players find shaman, they will have to make decision to imprison him or kill and depending on the choice, different things will happen and rules change. Once again, interesting choice for players.

And then the idea from Greece, from Themis. This was a huge twist on the theme. The scenario is called Time Travel and it takes place in the modern times. At some point, players were bit by a snake. To heal they need the antidote, but the plants they need extinct many many years before. To survive, they must travel in time and land on the island full of ancient beasts and monsters. Uneven rounds are in the past, even rounds are in modern times, you jump here and there trying to survive. Extraordinary concept.

And then once again an idea from Poland, this time from Mariusz. He sent 2 scenarios. The first one was for playing with kids. It is called Adventures in Neverland and is – obviously – inspired by Peter Pan story. This family-oriented scenario let players fight Captain Hook, feed TikTak gator and do all things inspired by the book. It’s filled with theme and kids who know the story will be in heaven. I loved the concept and as I believe Robinson can be a tremendeus family game to play with kids, I was so happy to see such a mission.

The other one sent by Mariusz was much different. It is called Us vs Them and it is the confrontational scenario. Fans for years asked if we can do the scenario that changes co-op Robinson into something else. Mariusz did it. He just did it – the mission works smooth, it divides players into two teams and let them score points for different achievements. A very unique and interesting approach to the Robinson Crusoe engine. Reading it was a treat.

Next mission is a take on horror in the Robinson Crusoe. Created by Norbert, the fan of Robinson from Poland. Players wake up in the middle of the jungle, don’t remember much and must reach beach and escape. Each [totem] icon on the tiles is another dreadfull discovery and the morale in this mission goes really low. It’s pretty hard mission, as you could expect from the theme.

And then Tempest came. Inspired by Shakespeare’s play mission is a real treat for fans of literature. Players are trapped on the Island and have to prove Prospero they deserve to leave the island. They must build their inventions, they must use their abilities, they must gather Determination tokens and use them when they’ll face Prospero. We have Kalibana trying to distract players, we have a good Ariel trying to help them. Great novel meets great play. What can I say! Amazing.

Next one was super simple and that was also very interesting. In The Curse of Mano-tiki players must gather gifts for angry gods of the mysterious island. There are four altars of four gods and each god demands different gifts. Trying to gather and collect all that stuff is quite the challenge although the basic rules of the mission are super simple and clear. Good job from Kamil.

And then we received scenario idea from Wojtek. It was called In the search of prisoners. The story starts quite similar like the Voodoo one. Players are on the ship that transport prisoners. The ship has a problem, and suddenly the prisoners escape. Players must go to the island, find them and bring back to the ship! Well, and here something interesting happens and I hope to meet Wojtek at one convention and talk with him about one tiny thing – how the hell he managed to get into my head and ‘steal’ one of my super secret ideas for The Lost City of Z!

On a more serious note, Wojtek came up with the same idea, I used in The Lost City of Z – into Hunting deck he shuffled prisoner cards that you look for (in City of Z there are crazy cultists shuffled in). This one idea changes the whole game dramatically and is absolutely awesome. I don’t want to talk too much about it now, to not spoil too much of the City of Z, so… Wojtek, awesome job. And we need to talk!

After long long hours of debate and considering all things like theme, rules, uniqueness, I decided to give the first award to Time Travel mission. Themis from Greece is a winner and his mission will be officially printed and gifted to players with our Robinson Crusoe Event Kit. I cannot wait for you to play it!

I also give 3 additional awards. In the search for prisoners from Wojtek for its brilliant idea with prisoners shuffled into hunting deck, Us vs Them for achieving impossible and changing Robinson into competitive game and Adventures in the Neverland for showing that Robinson can be an amazing family game (Us vs Them and Adventures in the Neverland were designed by Mariusz).

Time Travel will be officially printed and offered in the Event Kit. Themis will receive a pack of prizes very soon. Wojtek and Mariusz will receive box with prizes as well. We will discuss with them additional testing and consider publishing these missions too. All other participants will receive box with smaller prizes too. We appreciate your talent, ideas and we want to award everybody.

We will contact winners through email.
Thank you. You cannot imagine how amazing it was to run this contest. It was a real treat. Thank you.