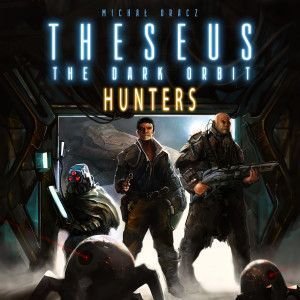 The second faction expansion for Theseus, the Hunters employ dirty tricks to hide, steal, and remotely activate their cards.

Gliwice, Poland – August 18th, 2015. Today, Portal Games announced Hunters, the second faction pack for the Theseus: the Dark Orbit line from designers Michał Oracz and Andrzej Sosnowski. Hunters brings an exciting new faction to the world of Theseus that employs trickery and subterfuge to their advantage. Hiding in the shadows, the Hunters can steal bonus cards and upgrade tokens, use enemy cards through hacking, and remotely trigger their own action cards. The Hunters also have the unique ability of leaving Theseus by hiding in their capsule just outside the space station.

Hunters was designed with the help of Andrzej Sosnowski, a Polish fan of Theseus who worked directly with Michael Oracz and Portal Games help playtest and develop the faction. This continues a long-standing tradition of Portal Games welcoming its fans to help bring expansions to life.

Theseus: the Dark Orbit is for 2 to 4 players, ages 8 or older and takes approximately 45 to 90 minutes to play. Theseus: the Dark Orbit – Hunters, an expansion which requires the base game to play, adds another faction for players to choose from at the start of the game. The Hunters expansion includes 1 Sector board, Unit Pawns, Faction Marker, Faction Cards, and a selection of supplemental tokens. Hunters will debut at Essen Spiel and be in European distribution shortly after. United States distribution will begin in late November. MSRP will be $19. For more information you can visit our website http://portalgames.pl

Portal Games is a publisher of award-winning games such as Imperial Settlers, Stronghold, Pret-A-Porter, Legacy, and Neuroshima Hex. Founded in Poland in 1999, Portal Games has developed into one of the most renowned European game publishers and design teams. Their commitment is to produce only the highest quality Board Games That Tell Stories.