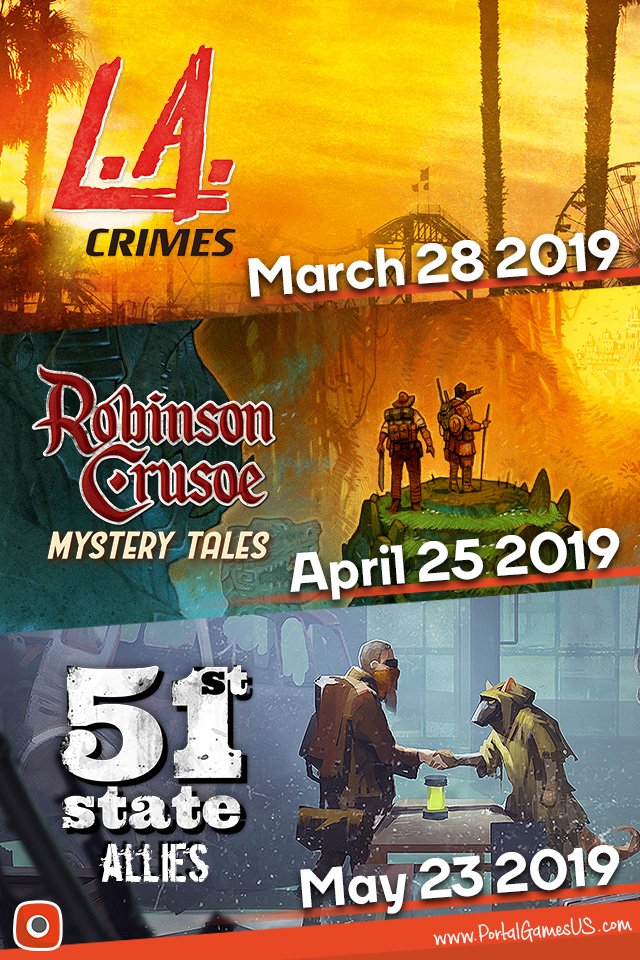 We would like to announce street dates for three upcoming major releases!

Detective: L.A. Crimes by Ignacy Trzewiczek and Mateusz Zaród, the first expansion for an award-winning (Game of the Year 2018 in Expert Category in France, Coop game of the year by Brawlin’ Brothers, and more) Detective: A Modern Crime Board Game, will be available on March 28th. Expansion will let you play as a group of LAPD detectives solving three cases set in Los Angeles in the 80s. Together they form a short campaign.

You can learn more about it here: https://detectiveboardgame.com/la-crimes/

Robinson Crusoe: Mystery Tales by Ignacy Trzewiczek and Joanna Kijanka is the second big expansion for Robinson Crusoe: Adventures on the Cursed Island. It includes the campaign (titled The Lost City of Z), where you follow great explorer, Lieutenant Colonel Percy Fawcett, and a full set of rules and components that can be used with the base game of Robinson Crusoe.

Mystery Tales are going to hit the streets on April 25th. Learn more about the story of Col. Fawcett here: https://mysterytales.portalgames.pl/

51st State: Allies is the second expansion for 51st State Master Set, a card game by Ignacy Trzewiczek and Portal Games. In Allies, you will find new ways to ally your factions – cards are going to include a new alliance mechanism, that will grant you new unique bonuses and features. The expansion introduces three new factions: Iron Gang, Uranopolis, and Sharrash.