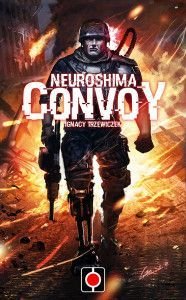 An asymmetric, 2 player card game set in the Neuroshima universe.

Gliwice, Poland – August 24th, 2015. Today, Portal Games announced Neuroshima: Convoy, 2nd Edition the latest release in the Neuroshima world from designer Ignacy Trzewiczek. Originally published in 2012 as The Convoy, Neuroshima: Convoy, 2nd Edition is an asymmetric card game for 2 players. With all new graphic design and streamlined play, this edition will be both familiar and refreshing to fans of the original game.

The Moloch has set its sights on New York City. Determined to crush the resistance forces of humanity, the convoy of wretched machines march across the barren wasteland determined to crush everything in its path. Humanity is not about to give up, however, and the Outpost stands between Moloch and their target.

In Neuroshima: Convoy, 2nd Edition, one player takes charge of the Moloch convoy advancing on New York. The second player commands the forces of the Outpost, determined to slow down or even stop the advance of Moloch. Changes for this second edition include: confusing icons were replaced with clear text describing the card action, and gameplay was streamlined by removing the special abilities of individual city boards.

“I am so proud of this design. It is only 35 cards per player – and when you hear me saying only 35 cards per player, you have to keep in mind that I am the person who starts designing the game with 300 cards, and then add one or two hundred more just in case. Not this time. In Convoy I managed to put huge replayability and lots of fun and meaningful choices in only couple of cards. It’s like a micro game for me. I am damn proud of this game,” said designer Ignacy Trzewiczek.

Neuroshima: Convoy, 2nd Edition is for 2 players, age 10 or older and takes approximately 30 minutes to play. The game includes 35 Moloch cards, 35 Outpost cards, 5 city boards, tokens, and a rulebook. Neuroshima: Convoy, 2nd Edition is scheduled for worldwide distribution in Q4 2015. MSRP will be $20 USD. For more information you can visit the Convoy page on our website website at https://portalgames.pl/en/all-game-list/convoy/

Portal Games is a publisher of award-winning games such as Imperial Settlers, Stronghold, Pret-A-Porter, Legacy, and Neuroshima Hex. Founded in Poland in 1999, Portal Games has developed into one of the most renowned European game publishers and design teams. Their commitment is to produce only the highest quality Board Games That Tell Stories.