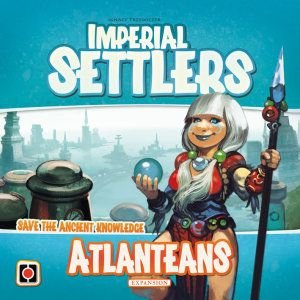 Gliwice, Poland – May 11th, 2015. Today, Portal Games announced Atlanteans, the first faction expansion for the Imperial Settlers line from designer Ignacy Trzewiczek. The denizens of Atlantis bring their technology to the world of Imperial Settlers with all new mechanics that change the way you must play the game both as the Atlanteans and against them.

The Atlanteans bring a new resource to the world of Imperial Settlers with Technology which may be used to unlock special abilities on faction cards, and transform common buildings into powerful allies. The Atlanteans must use their new abilities to find unique ways of scoring because their faction buildings sink at the end of the game and do not score points! While the other factions do not have the knowledge to use the Technology of the Atlanteans, there are some buildings for each faction that allow them to use some of the Technology to their advantage.

“When I set out to design the Atlanteans faction, I knew I wanted them to play very differently from the other factions,” said designer and CEO of Portal Games, Igancy Trzewiczek. The main goal of introducing new factions to Imperial Settlers is to make sure they do not feel only slightly different, but very different from all others. “After all these months of designing and playtesting I am satisfied with the result and I know that this faction indeed plays differently.”

Imperial Settlers is for 1 to 4 players, ages 10 or older and takes approximately 45-90 minutes to play. Imperial Settlers: Atlanteans, an expansion which requires the base game to play, adds the option for playing with up to 5 players. The expansion includes a new Faction Board, the Atlanteans faction deck, Technology tokens, and expansion cards for the original factions that complement the Atlanteans abilities. Atlanteans will debut in July at Gen Con 2015 and will be in retail distribution worldwide in August. MSRP will be announced at a later date. For more information you can visit the Atlanteans page on our website website at https://portalgames.pl/en/all-game-list/atlanteans/

Portal Games is a publisher of award-winning games such as Imperial Settlers,

Stronghold, Pret-A-Porter, Legacy, and Neuroshima Hex. Founded in Poland in 1999, Portal Games has developed into one of the most renowned European game publishers and design teams. Their commitment is to produce only the highest quality Board Games That Tell Stories.