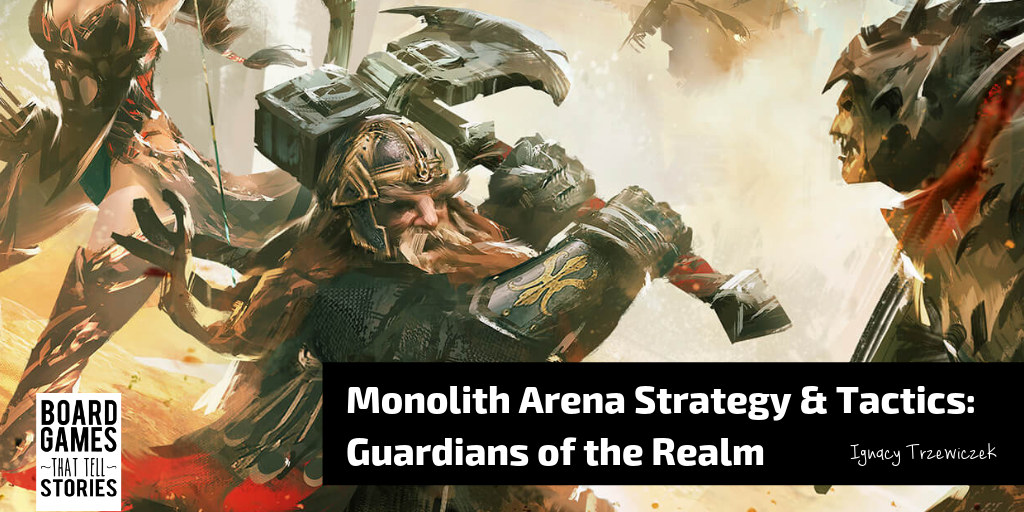 On one hand, I’d say playing Guardians is the easiest from all four factions – these are dwarves, everybody understands how to play them. Defend, stay in the corner and then, once a while hit, hit strong. You get these yellow tokens, you see the artwork, and immediately you know what to do.

But let’s face it. The basic strategy for this army is simple. But a winning strategy… That’s another pair of shoes.

The wall
Put your banner in the corner. You want to have three free spaces next to it. Many of your units attack in 3 directions, and that is the best way to use the space. You warriors next to your banner will get additional life point (Shield icon!), and you are set to defend!

Runes
If not warriors, put runes next to your banner. Runes cover the space, so the enemy cannot attack the banner, and more interestingly, runes will increase the strength of your warriors that are in the second line surrounding your banner. That way you have a banner surrounded by runes, and these surrounded by warriors. That’s a pretty awesome position.

Orders
Guardians have three potent orders. Fire concoction is self-explanatory – you see a group of enemy units, you throw a grenade. With a Push order, you need a little bit more strategic approach. Push is an order to build great walls; it’s a perfect order to play, move the enemy away and then immediately to put your unit in the free space. Push and take a position, push and take a position – if played right, you have three chances to do this combo. False order is even more powerful, not only you push them away, but you can move them in any direction Once again, play it in a pair with your unit, make it two-step plan, move and then immediately use the new situation on the board to put your unit and take advantage of freed space.

Crossbowman
Last but not least – crossbowman. You have three such units in the army. If combined with Rune of Penetration they are one of the strongest combos in the whole game. It’s tempting to aim that combo at enemy banner and deal two damages to the banner and to some units that are on the way too. Much more effective though might be aiming next to your banner, to spaces that are adjacent to your heart. That way you can kill many opponent units in one single shot, eliminate a swarm of enemy warriors with a single shot from crossbowman armed with rune of penetration. That’s a pretty impressive defence strategy. Defending by fire!

What are your thoughts on Guardians strategy?