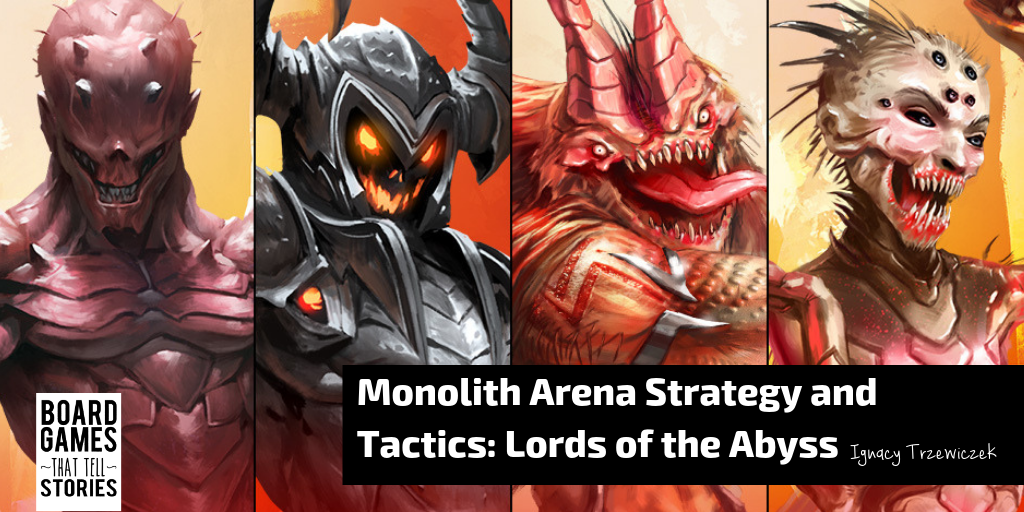 In this article, I’d like to discuss the essential strategies to play with Lords of the Abyss. As many point out, this faction reminds of Black and Blue decks in Magic the Gathering. How to get most out of it?

Poison your enemy. Set up your banner in a way you have two adjacent spaces ready for your units to attack. Each of your units adjacent to the banner gets the Poison ability, and this is crucial for your strategy.

If possible, you might even place your banner adjacent to the enemy banner! Put your Chaos unit behind your base, and then you can even shoot over your banner with a deadly poisonous force.

Remember, don’t waste your Battle orders too early. First, poison enemy banner and then start the war, then activate as many battles as possible. An early played battle is a waste of opportunity.

Teleport. Your ability to teleport your units is a powerful one. It’s wise to place your units in a safe position, and then, only when needed you will teleport them in the right place to counter-attack and sabotage other player moves. Don’t throw them in the middle of hell right from the bat. Let them hide in the darkness and then teleport into the battle when you need them!

Units. Nightmare unit is best against enemy banner or to protect your units with Poison. You want them to survive as long as possible to deal Poison tokens. Use Spike units to attack enemy banner and put it as far as possible from your banner – that way you make the enemy to choose, focus on your banner and attack it with a full force or focus on Spike and defend against Poison! That’s the kind of choice you want them to have! Mygalomorph is best in the center of the board so you can fully take advantage of his ability to attack in 3 different directions.

As for Rune of Disarmament, put it in the corner. They will be covered on one side because of the end of the board and then with their ability will protect a big part of the board against enemy attacks!