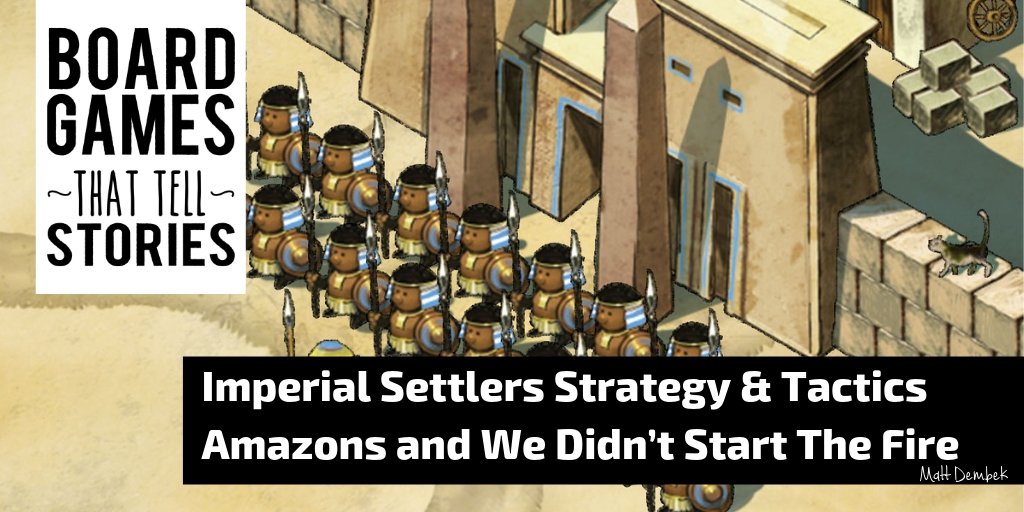 It’s time to use Conquest with Amazons! This already sounds like a great idea, so let’s tackle the last expansion for them included in the box – We Didn’t Start The Fire. How will their deck building effect work with the new mechanics introduced in this expansion? Is releasing Cerber on our opponents enough to stop them from conquering our empire? First thing first; let’s prepare for the incoming battle.

Once again we want to help you try different options that work well (in our opinion) when using this expansion while playing Amazons. Let’s take a look at the opportunities presented to the fierce Amazons in this Imperial expansion.

Greek Legacy is a card with three copies – it’s a strong start – I would even dare to say that we couldn’t start off better.

Thanks to this card, you will be able to protect your empire with upcoming Foundations from its Production – making it harder to Conquer your essential cards. So we recommend building it as soon as possible – even if that Building Bonus sounds exciting and you might be considering waiting a while to snatch a few of your opponent’s Buildings. The best choice, in our opinion, is to replace the Flee market with it. This way you won’t tempt your opponent with extra scoring options along with a triple color-coded card.

Stables and Fortress of Ares – two cards with two copies each. Other reliable choices, as discussed here.

A mighty card, especially when you are able to rotate it between your empire and your deck. Drawing cards from the top of your opponent’s deck and being able to choose the one that you discard sounds fantastic; it’s a silent attack that your opponent cannot avoid. Chamber of Treasures feels like another good choice here. Don’t give your opponent reason to get that Feature to gain VP whenever they Raze, especially now with Stables in your deck.

It’s not hard to raise that Fortress with Amazons, and you should go for it – especially in combination with Greek Legacy (used even as a Deal) – you will have plenty of Foundations to discard to Fortify it. Here we would recommend replacing either Bounties or Statue of Midas. Bounties, yet another exciting and open-for-taking scoring card. But then again, you might consider to keep some of them and let go of some gold for that instance. We feel like both choices are cool.

Single copy cards presented in this expansion: Diversion, Alarm! and Cave of Cerberus. Cards that allow you to Conquer other players, utilizing the main mechanic of the expansion.

This card helps you adjust the position of cards in your opponent’s empire. You want to take advantage of it before you decide to snatch one of their cards to reduce the cost of Conquer. Our choice of replacement would be The Capital. Storing Resources is great, which makes it once again an interesting option for your opponents, so let’s not give them that.

A must-have card in your deck. How would amazons without an option to conquer look like? You want to be able to pick one of your opponent’s buildings – even though it’s only one card, with the Amazons’ feature you should be able to find it fast. Here we recommend replacing either Rear Guard or Secured Garner from their main deck since both of them won’t be as helpful using this strategy.

As for this card mentioned before, it’s an optional choice. Sure it looks cool, but the building bonus feature works mostly as a defensive strategy in this tactic. If you see your opponent preparing themselves for conquering by stacking up on Sword deals, you can steal those deals and stop their engine. But then again, your opponent might ignore deals, and you won’t be able to get anything, so we leave this choice to you. As a replacement, we would go for the other one recommended above – Rear Guard or Secured Garner.

So maybe Amazons didn’t start the fire – at least they don’t want to admit it. But they are ready to ring the alarm and conquer some empires. To be honest, they were always ready. Give this expansion a chance and prepare your Amazons deck. Let us know how you liked it, and if you took Cerberus for a walk and some Conquering along the way.