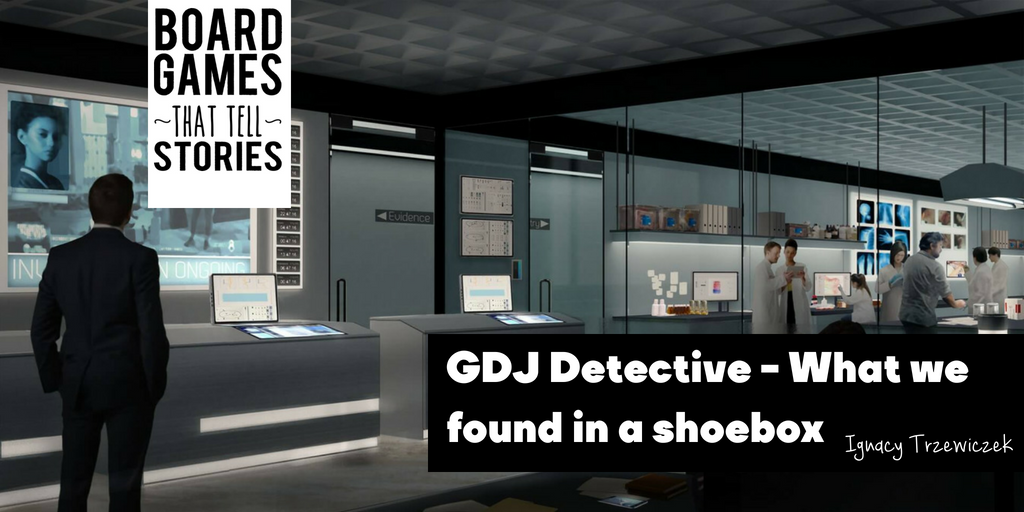 It was a long journey. We started with a paragraph book, just like a base game of Sherlock Holmes Consulting Detective, and then we began to develop the idea and look for improvements.

The one thing that has always bothered me are these moments where players are snatching the paragraph booklet from each other. One person was reading, the other wanted to cross-reference something, but there was only one book, and they had to wait to get it. And because from the very beginning, I wanted Detective to be more gamified and I wanted it to have a stronger game structure, we knew we should work on this booklet thing.

The first solution was straightforward. We created three separate books. The one was all about the hard evidence and laboratory. The other was about talkin’. We had all interrogations and questioning paragraphs there. The last one was the true detective work – it covered crime scenes and in general field work paragraphs. Each booklet covered a different type of clues.

We then created characters, each of them had a dedicated icon representing a unique ability. One character was better at talking with suspects, the other was all about the laboratory. And then we added a small ‘There is more’ icons to some of the paragraphs – if a player who had skill read it, he could read an additional section and learn more.

That was it. Each player was holding their own booklet, they felt like specialists. In one small decision, we solved two issues. No more snatching paragraph book, and additionally this fantastic feeling of players, the feel of ‘Trust me, I am good AT THIS.’

We played that way for a couple of months. And then Przemysław came to the office with Case #2, but instead of three booklets, he put on the table a shoebox.

You should see my face at that moment. I made this “WTF, dude?!” impression, but he just smiled and opened the box.

Inside the box, he had all the paragraphs from the booklet cut into small sheets of paper, organized by numbers, with awesome looking cardboard dividers every 25 numbers. It looked just freakin’ awesome, it looked like I was at a police department and somebody opened a drawer full of different files.

He bought me with this idea in a heartbeat. I took the box, and that’s how we were play-testing for the next few weeks. I loved it. It was super thematic, each time players wanted to read a paragraph, they had to browse files in the shoebox. I know it sounds funny, but man, that was a very cool experience.

That weekend I was playtesting at the private convention, and on my way home, the shoebox got damaged. I came back, I took all the paragraphs from the box, put them in a stack on the table and trashed the shoebox. When I was looking for a new box to store all of it, I looked at the table, at the stack of all the cards.

It was a deck. I was looking at the deck of cards. And at that very moment, I understood. The room spin. In a split second, everything changed. It was a deck. These were cards. We were designing a card game. The possibilities were endless. The next chapter in development has begun.