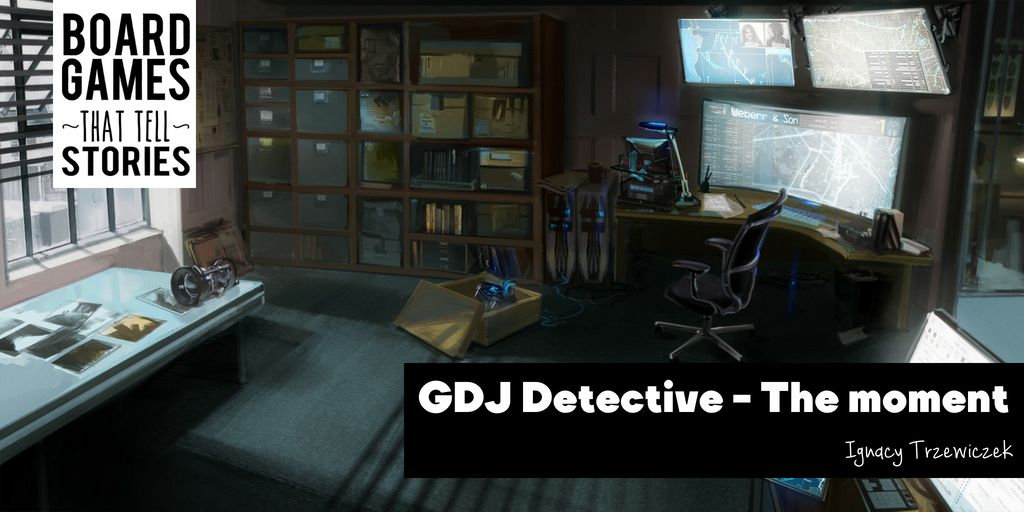 Detective is sent to all the players who decided to pre-order it directly from us. Nearly 1000 groups will start playing the game in upcoming days. Another year, another game, another time I must say “It’s done. I did my job. It’s time to walk away.” This was a fascinating project. Left me with a ton of memories.

The Dice Tower con, Chaz, Jamie, Melany, and Marty play Detective. There is a ton of discussion, table talk, double checking cards, browsing through the notes, everybody is engaged. Everybody except Chaz, who stares at the laptop and for a good couple of minutes doesn’t take part in the discussion. He is not with the group. He is not with us. I’d be worried, but I forget about him because I watch all the other players talking and brainstorming and this is so fun to watch.

‘Guys! Guys! Look!’ he suddenly shouts and points at the computer screen. The whole table freezes. ‘There is the connection. Look at the dates…’

He just found it – a small, unobvious clue. He was staring at the computer for all these minutes comparing files, and checking dates and he found it, the small, tiny piece of the puzzle we hide in this huge matrix of data. This is the moment.

Anyway, the game progresses, everybody is deep into the game, the story is engaging. And at some point magic happens. Rob gets up from the table, raises his hands like Sherlock and starts walking around the room. ‘Here is what we know…’ he starts.

The immersion is absolute. We are detectives. We are solving the crime. For this one moment, for these few minutes of pure immersion, it was worth working on this game for the past year. This is the moment.

The Dice Tower con, Orlando. A group of players on the other table just finished a demo. It was not my table, but I approach anyway to ask how was it. ‘This guy here is an investigator in real life!’ says one of the players and points at the other man sitting at the table. I sit next to him. ‘So?’ I ask.

He nodds his head. ‘This is good stuff. Legit. Realistic. Good job, mate. I am buying a copy when it is out.’

There was more. So many great, fulfilling moments, split-second moments that made the whole work on the game worth it. There was Stephanie, who was the only one person out of my all play-testing groups who noticed one small sentence we put in the police report and drew conclusions that basically solved the whole Case #2. There was Andy, calm, rather passive play-tester who in the middle of Case #4 jumped from his chair shouting ‘I knew it! I fuckin’ knew it!’ when a clue found confirmed his thesis he built in Case #1 and was holding to it for the few weeks of play-testing. There was finally me playing for the first time Case #1, back then, very early stage, in our old office, about 2 years ago. I still remember gooseflesh when for the first time I dug into the story…

The moments. They make it worth. That’s why I design.