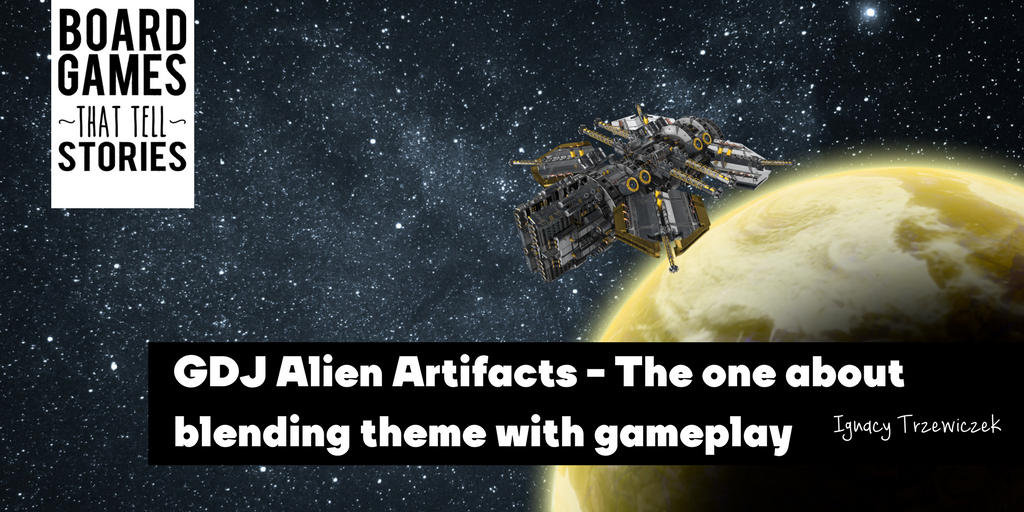 The storyline for Alien Artifacts moves the universe to the point in which humans discover a new resource – Xenium. Hidden under the crisp surface, not known before, now, thanks to miners from Community faction, got suddenly revealed. Everything in the known worlds immediately changed.

How the fluff, the story transfers into the game mechanisms? We had a ton of fun creating new cards that match the plot.

First the new resource itself. We wanted it to be special, so not only it is very powerful – acts as a wild resource for all game purposes – but also each resource card has an additional special ability. You guys found something unique, that’s for sure. Some give VP, some allow to activate ships, some produce more cards…

Then we looked at planets. To match the theme we designed a new type of planet – obviously, the one that can produce this new resource. To add more alien flavour, on the logistics side of the card, the planet offers a discount to get Alien Artifact cards. So either you will produce a super resource on the operational side, or you will grab alien artifacts cheaper from logistics side. Pretty awesome options to choose.

Then we went for ships. A new type and once again, to connect it to the story, we went with harvesting ship instead of warship. This new Xenium ship allows players to – instead of attack – produce resources on the planets. It opens a ton of possibilities for players, and now going into ship strategy, may mean going into resources strategy! Ships no longer are all about war. That’s our way of representing the theme – humans now instead of fighting want to take advantage of new discovery, of the new resource and they do their best to harvest as much as possible.

The technology cards are an obvious choice and no surprises here – all new tech cards are somehow dedicated to the new resource – in most cases, spending the xenium let a player do crazy stuff.

In the expansion we also added few more Alien Artifact cards – knowing that Xenium planets decrease the cost of getting AA cards, we knew you guys will desire to have few more options and surprises hidden in this deck, hence few new cards.

And that’s pretty much it. Using very simple tools, we matched the gameplay with the story, new planet and new ship type changed the game, added new legit strategies and increased replayability. All of that is simple 50 cards you just shuffle into and play.

Mission accomplished.
Now of to the next chapter.
The story will continue. There is another huge event on the horizon. Stay tuned.