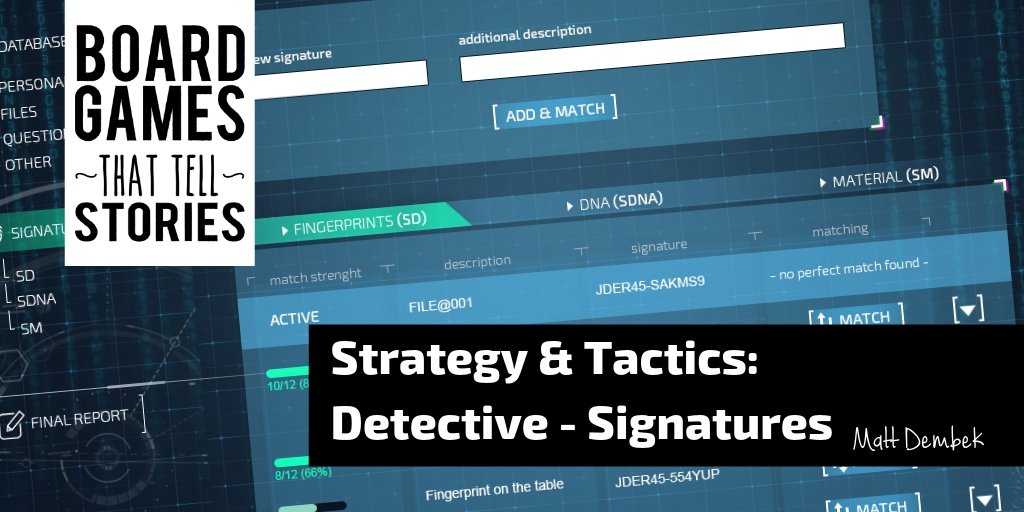 Long hours of work behind the desk, following different leads and figuring out various theories, while making sure they are the correct ones. If you played Detective: A Modern Crime Board Game, you know this routine by heart. However, many players are still surprised when things go wrong – why did they get such low scores for the signatures in the final scoring? “Did I do something wrong?” “Is the system broken?” What’s actually going on?

What do the signatures stand for?

Signatures are different pieces of evidence – lifted fingerprints, DNA traces and material shreds of evidence. A good detective tries their best to find most of those, to support their hypothesis. It is hard to prove the craziest or even the most logical theory without the support of any evidence. Evidence that the prosecutor can later use during any future process. Evidence that our boss can present to their superiors. Sometimes without evidence, it’s impossible – that’s why the system was introduced in the gameplay.

How do we gain Victory Points?

In Detective, you are supposed to enter each signature that you find on cards and files into the system. With files, you can do it with just one click of a button, but you still should click all of them. However, in the base game, no single signature will provide Victory Points, unless it’s matched with another, specific signature. The system will check and match all added signatures for you, so if you add them, you will be able to prove some assumptions, and you will gain Victory Points for that. What do we mean when we say “matched signatures”? That depends on the context of the case. For example, a fingerprint might not be enough to incriminate a person. Sometimes we won’t even be able to tell whose print it is. Only after we have a matched signatures, might we be able to draw significant conclusions – and the system will reward us for it.

Where are my Victory Points?

In a game such as Detective, where we aren’t able to reveal each card and file during the game, there’s a good chance that we won’t be able to find those specific connections. That’s why discussion between players, respecting each other’s input and coming to a conclusion is so essential in this game. We need to listen to all votes for and against before we follow another lead. Time is the most valuable resource in this game, so just a few wrong choices might mean that we won’t be able to reach the place that contains a signature needed to create a connection. Even if we find a close, matching result, it doesn’t have to reward us  with any Victory Points, but it might still be useful and informative as a complementary signature. Each pair of signatures that matches over 66% can be a valuable clue for our ongoing case.

In the latest expansion, there is a possibility that a single signature may provide Victory Points, because the evidence it represents is already incriminating enough that it doesn’t need any more proof.

Remember though, that a capable detective can solve a case and figure out everything without any evidence. However, each piece of evidence is essential, and a great detective is even better than a capable one – and should know where to look for them.