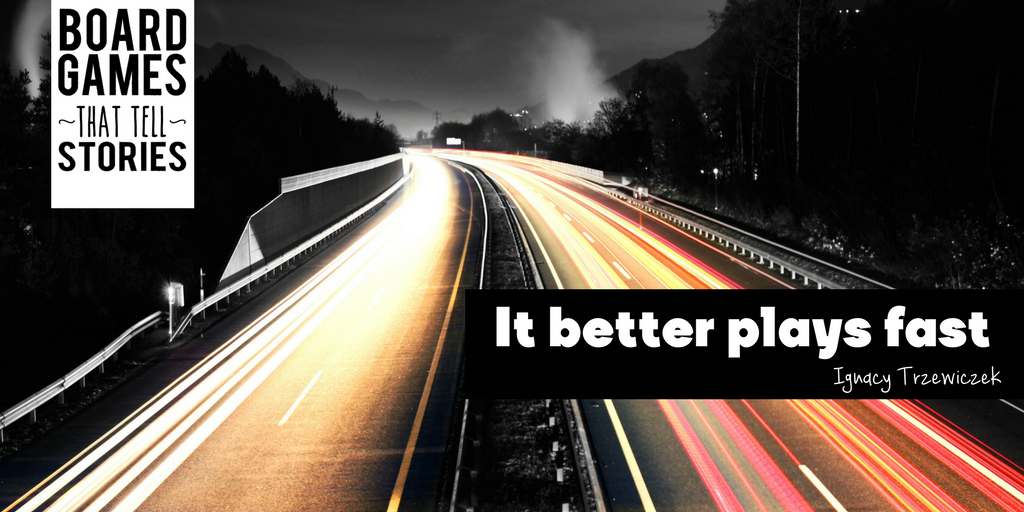 [I run this blog since July 2011. I’ve decided I will choose articles I like the most and republish them here to present them to all new board game fans that joined our hobby meanwhile! For all of you who already read the article, I hope, you will have a good time again with it! Today we go back to February 2013]

In that way players had fun since the very very beginning of the game – it was just like in those novels – they are on the beach and they are checking their pockets looking for anything valuable. Some of them have something, some of them nope.

It didn’t make it to the final rules set.

Because it makes set up longer. Because I need to find all those small moments that make the game longer and kill them.

Make it fast. As fast as you can.

Have you watched The Dice Tower best co-ops? Do you watch or read stuff from other reviewers? Every reviewer sees short of the play as an advantage. It plays quickly. It is rather smooth. It plays in an hour. You can play two games in a row. These all are advantages. No doubt about it, right?

I talk a lot with my friends from Rebel.pl. This is the biggest games store in Poland. I talk with them to know what is trendy, what sells well, what customers say about games. I wan a to be updated.

He ask for economy game.
He is recommended two games.
One plays in 2 hours.
The other in 90 minutes.
Do you you want to take a guess which one will he buy?

Yeah, players like games that play fast, do they?

There is however one question that pops in my mind again and again. If we are games fans, why we want games to play short? Shouldn’t we be damn happy playing them as long as possible? Why we want fun to be short?

P.S. Title is taken from the great song Business Time by Flight of the Conchords. Check them out: http://www.youtube.com/watch?v=WGOohBytKTU