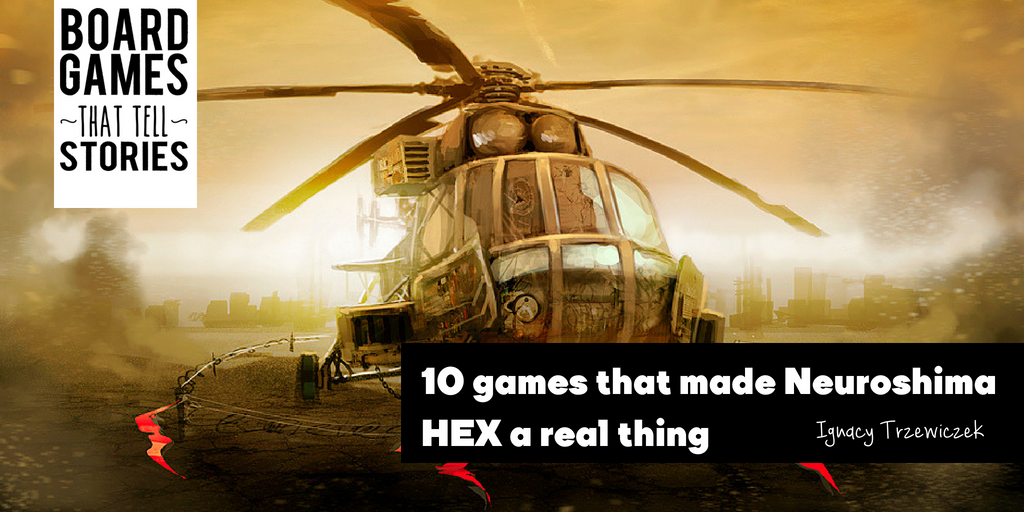 In may, this very month we finally released all 12 (twelve!) armies for Neuroshima Hex. There was a ton of armies released only in Poland and for years fans worldwide were waiting for release – Portal Games was releasing two or three per year, but that was a very slow process. And finally we made a decision – stop this bullshit, just reprint them all once for good. And here we are, no delay, no problems, now all 12 armies are available in English worldwide.

To celebrate this epic moment let me go back in time to April 2015 and republish a great article from my friend, Michał Oracz, designer of Neroshima Hex.

1) Colosseum – this is my own logical game (quite an old), it’s about battle between two factions, quite similar to NS Hex. I have used its basics, which have been changed later and in the end created a new game.

2) Magic the Gathering – many elements which are typical for Magic were used in Hex. It was natural for me to keep your army tiles hidden to create your “deck” (for very long time I have been using word “cards” instead of “army tiles”). What is more – 20 HP, and the fact that death of units does not affect player’s HP.

3) Light speed – this real time card game was source of initiative, which determines the order of units but also direction and strength of attacks, armour, which protects certain sides of the card (in NS HEX – tiles) against shoots. Obviously, we have used game design – you have to deploy your units first, and then all units take part in battle at once.

4) Zombiaki – this game was source for the rule of discarding one card (tile in NS HEX) at the beginning of your turn and some things like net, grenade, sniper, division into board and instant cards, blocking of line of sight etc. Even today while making a new army I am looking through Zombiaki (and other our games) searching for rules which might be useful. Every time we are able to do it I am very satisfied, it is great fun.

5) Kingdoms – this board game (finally board game not a card game!) was source for method of arrangement of tiles on the board and what is important very strong modules which affects adjacent spaces. When I was designing NS Hex I was convinced that I am designing battle clone of Kingdoms.

6) Chess – chess are deeply rooted in my mind every time I design any game – for NS Hex I have borrowed various figures of special usage which are easily to destroy, and the King which is the most important unit (in NS HEX it is HQ).

7) Knights of the Cross – although, it is a computer game in fact it is a very good board game. Like in chess, there are various pieces, some of them are very thought, other very strong or fast. In the game we use those pieces to compose our army and then to confront our enemy who has completely different set of pieces (also a few of them). In NS Hex I have been trying to reconstruct this system.

8) Illuminati – from this card game by S. Jackson I have borrowed connectors which combine cards into more powerful systems, what became modules connectors in NS HEX.

9) Cave Troll – NS Hex was put aside as useless for a long time waiting for the last piece which was later taken from Cave troll, and finally NS Hex started to work. To be precise NS Hex was waiting for Battle tile. After playing this piece it starts that what is the most important i.e. action connected with victory conditions and sums up the whole puzzle we prepared during the game (in the Cave Troll there was a token which was starting summing up of points, also several times during the game).

10) Neuroshima RPG – it was obvious that we have to place our game in our own universe, so I decided that world described in our role-playing game Neuroshima will be the best.