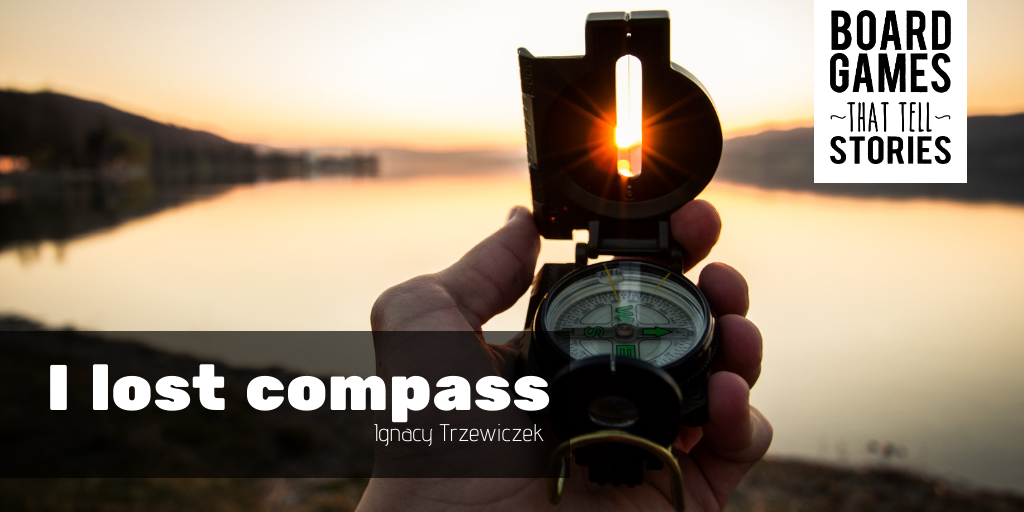 I lost it. I am done. I qualify for retirement. My compass is dead, and I feel like for the first time in years, I am surrounded by a thick fog. It feels terrible. Let me explain.

I was pretty prophetic when in 2011 I created Board games That Tell Stories tagline for my company. I designed Robinson Crusoe and talked aloud that players look for good stories in games.

I was a bit too early to the party when in 2013 I published epic HMS Beagle campaign game – a massive expansion for Robinson Crusoe. Geeks needed a few more years to discover and fall in love with campaign games.

I was perfectly on time with Tides of Time in 2015. The whole industry was at the peak of love for microgames, small games got a ton of attention, and I brought one of the best ones out there. Tides of Time became a worldwide hit.

I pretty much nailed it with the timing for my Mars game in 2017. We all know it turned out into an epic disaster because gamers did not enjoy my game, but as for my compass skill – that was strong A+. The best compass in the industry. I would argue that in this case the compass actually killed me, the hype for First Martians was so huge, the expectations so high, the demand so crazy, that when I came with the game on the golden plate, it could only disappoint.

Anyway, a year later, the compass once again proved it’s value. In 2018 I came up with Detective. That was an ultra combo – campaign game and a detective game. In 2018 you could not have any better. The game sold in more than 100k copies, won more than 30 awards, became the detective game. Mindblowing plot spread over five challenging cases was something never seen in the industry before. My – created 7 years earlier – tag line shined. It was a board game that tells story. And what a story it was!

2019 in the industry was all about only three words. Roll and write. There was not a single publisher who resisted the trend and hype. We knew it, and we combined it with the rapid growth of solo gaming, the trend that could not be ignored any longer. As for the numbers and as for business decisions, it is much safer now to release a game for 1 player than for 2 players. Solo gaming has its moment, and it’s freaking strong. Our Roll and Write had 48 unique boards dedicated to a solo play. Our other release, Empires of the North, had a dedicated solo booklet with unique scenarios and modes to play the game. The compass was on the spot again.

But… Yeah, and here we come…

Compass served me for years. Being part of the community, being on game forums, being active on social media, being a vivid board gamer myself I felt it, I knew what players play, what they like, what they discuss about, what’s hot, and what might become hot soon. I was always one of them, and I was as excited as they were. I loved Love Letter back then, and it was no brainer for me to sign and develop Tides of Times. It all came naturally to me.

I no longer have it. The compass is silent. I am pretty confident we will see an epic collapse of the campaign games trend this year. I hope I am right because in two weeks, at Portalcon we are going to announce a very unique campaign product, a product that hopefully answers some of the problems I think I see among my fellow gamers.

But what’s next? I don’t know. Too many games. Too short life span of a game. No trends in the forums. No single game lives more than a few weeks on Twitter or Instagram. Games are played one time and tossed aways, replaced with a new hot title. It’s crazy.

Fellow geeks. My compass is dead. Please help me with yours. What will we see in 2021? Where are we heading? What new mechanism or genre you see slowly getting attention?