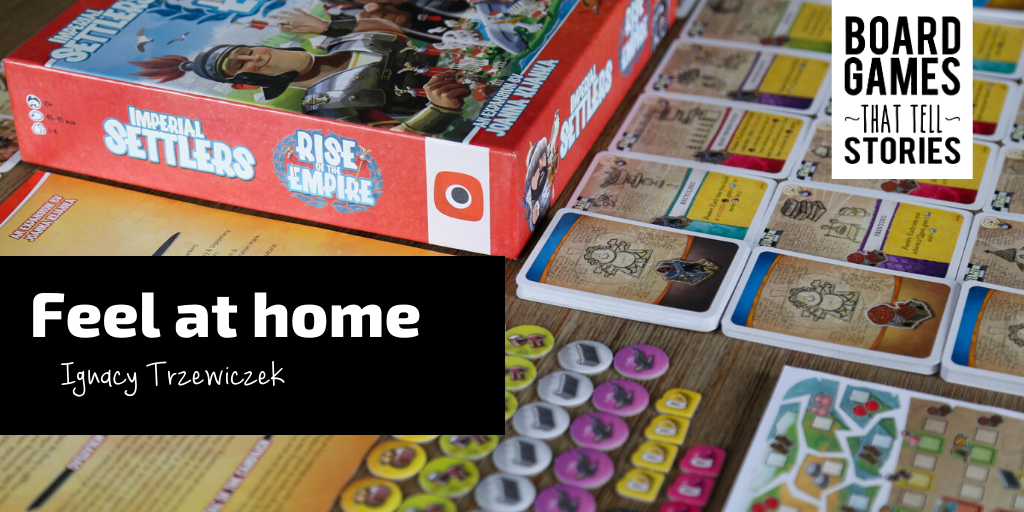 It was October 7th, 2018, when I played Imperial Settlers for the last time. Since then, I released Empires of the North, Imperial Settlers R&W, and Roman Banners and Japanese Islands expansions. Things happened, I’d say. This weekend I put my old box of Imperial Settlers on the table again, and I had a game with my wife Merry. We played Rise of the Empire expansion. Before we go into details, let me put this straight – I loved it.

It’s hard to believe it’s been six years already. I remember it as if it was a few weeks ago. Debates over the layout of the game. Playtesting for hours in the food court in Katowice’s biggest mall. Solo variant designed in the last moment. Solo variant winning Golden Geek award. Selling the whole stock we brought for Gen con 2014 in less than half an hour. Playtesting Atlanteans in the hotel during Gama Trade Show 2015. Accepting proofs for Aztecs during Gen con 2016. Pure joy when the very first prototype of Amazon faction worked smooth and playing it was a blast from the very first test game. Fans making fun of me because I couldn’t pronounce the word ‘amazons’…

Over these six years, we released six expansions. Including promo items, the whole set now has about 800 cards. It’s quite the history I have with Imperial Settlers. I play, and memories of all these amazing events are here. All the combos, all the cards, all the tricks I know.

I really enjoyed my weekend with Imperial Settlers. We played three games over the two days; our Empires grew, our little civilizations conquered new Provinces and made some epic Inventions. I played Japanese faction, and on one hand, I did what I always loved in this faction – traded a ton of Apples and hired an army of Samurai meeples, but on the other hand, thanks to new cards – Provinces, Inventions, Goals I was pleasantly surprised with new combos and abilities that changed the way I usually played this faction. After these three games, I cannot help it – I know you will enjoy this expansion.

I warn you – this summer you gonna play Imperial Settlers. I know you haven’t played it for a long time. I know you have Empires of the North on the shelf. I know there is so many new cool games on the market now. I know it all.

But I tell you this – you gonna play Imperial Settlers. Because East or West home is best.