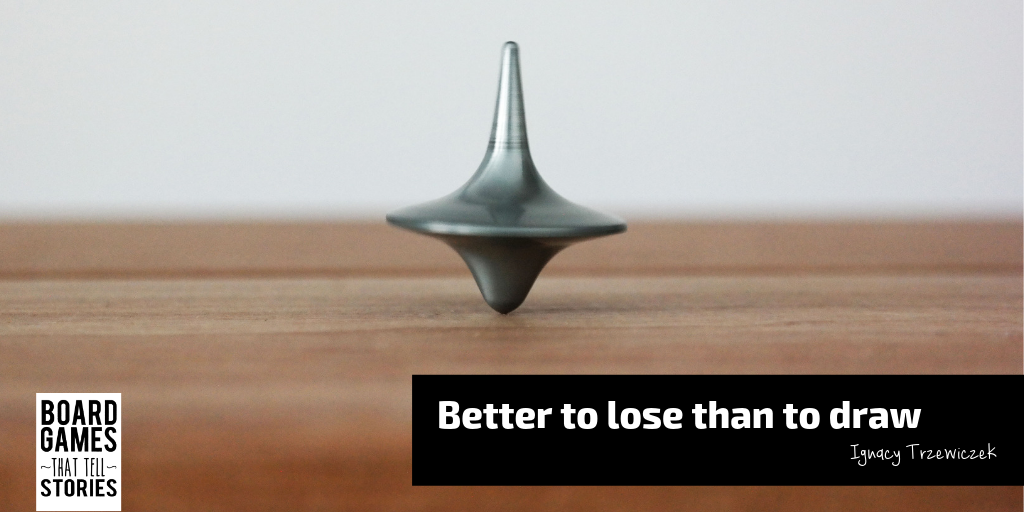 In one of his reviews, Tom Vasel once said that every game should have ultimate and final tie-breaker. He said he really is disappointed with: “In such case, both players share the victory.”

I couldn’t agree more. I precisely remember my one and the only game of Power Grid that happened in winter 2006 – after three hours struggle, we finished tied. That was a really disappointing moment. Seriously, I’d prefer to lose than to be tied winner.

A tie is an unfinished matter. It’s the unresolved case. It’s end without the proper ending.

For serious games like Cry Havoc, we don’t fool around – once the game ends you will have a definitive winner, it’s either a player with most prisoners at the end of the game or the one who went later in the initiative order, we don’t have any compromises here.

For silly games like Rattle, Battle Grab the Loot we wrote that both players should send me photos of ships they built and I personally will decide who won the game.

In most cases, designers and publishers go with a few standard solutions. Who has more resources left. Who built more buildings. Who put into play more valuable or expensive things.

We – as designers – look at you and say something like ‘You both played well, you did great, you scored equal number of points so now we will look into all these small tiny details and try to find who was more efficient or who would possibly win if the game last one more round.’

It’s good. It’s legit. But why not try to go a different route?

Award somebody who was not whining during the game? Who was not changing moves and taking back? Who explained the rules at the beginning of the game? Who brought cookies?

Let’s face it – if both players scored the same and if they both proved to be a good strategist, why not award the guy who acted nice and friendly? Let’s promote positive gamers!

And at the same time, let’s make me lose all tiebreakers. I am one of those who whines all the time.