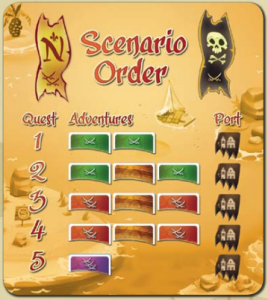 Rattle, Battle, Grab the Loot is a scenario driven game. Of course it is! It’s a Portal Games game after all! From the very beginning I knew that players would be drawing cards that describe particular adventure or sea battle. This would tell the story of the game. Soon after, I began to group those cards into categories. Scenarios were born.

Admiral Norrington is one of the main scenarios. I’d call it the base game scenario. It is the scenario we use to present the game at conventions and is likely how most of you will probably first play the game. In this scenario, Easy adventures are all about sinking merchants and pissing off the Royal Navy. Players grab loot, destroy the Queen’s convoys and do all they can to awake the beast.

And he comes with a score to settle! 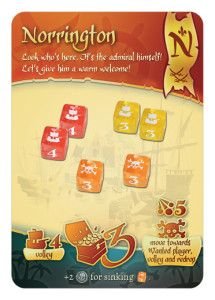 The Hard scenarios are all about Admiral Norrington going after the players… in particular, the Wanted player! At the end of each adventure, the player with the most Gold becomes Wanted. Admiral Norrington is targeting that player specifically. Most of the Hard adventures have some small rule to make the Wanted Player cry. You’ve pissed off Norrington himself… you are in trouble!

This deck is funny. I had a great time designing these adventures. You will attack the port (of course!), you will attack the convoy, you will try to raid a British Island full of the Queens treasure. There is a great deal of adventure on these cards and I did my best to convince players that they are fighting with a very angry British naval officer. 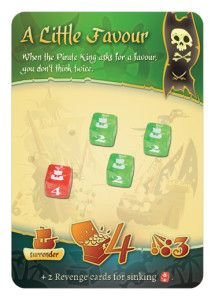 The Pirate Wars scenario was born later. It is all about being mean, and backstabbing the other players. It is the scenario for all of you Munchkin fanatics. This scenario introduces a new rule: Revenge. If another player sinks your ship, you will be given a Revenge card. These represent a black mark given to you by the King of Pirates. You complained about the actions of the other pirate and he agreed. Your Revenge card allows you to sink them back without consequences.

It is full-throttle combat. Pirate versus pirate. May the best cheater win!

What about the Introductory scenario? It is small, only 8 cards. Each card is a tutorial that will teach you how to play by introducing a new rule. They explain the story of how Admiral Nortington appeared on the scene. It is a prequel to the main story. You’ll only ever look at it once and move on. There’s no variation to make repeated plays exciting.

What’s next? We aren’t done. There are many more stories to tell. An Angry ocean… Old dogs… oh, yeah, there is more…