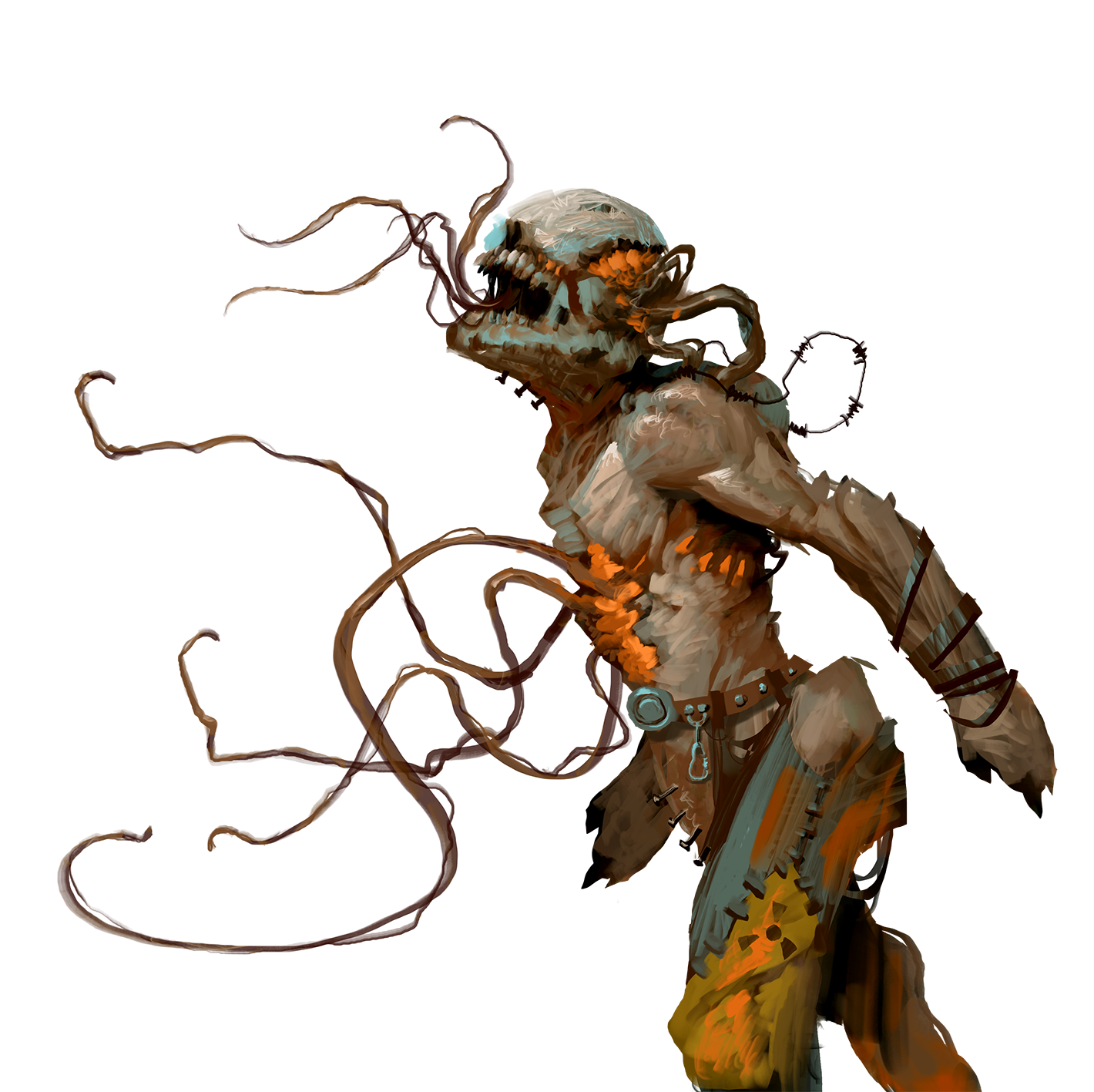 The plague which cast Detroit into flames transforms humans into mindless monstrosities which lust for killing; hideous slaughtering machines which make the mutes from the Death zone look like docile pets. The disease entirely burns off the brain, leaving just enough cunning to trace one’s victims. The memories are lost, the feelings are gone, whatever could testify to the humanity of those infected is eradicated. Instead, the creatures gain superhuman strength and unnatural resistance to injury and wounds. Oh, and the irresistible need for killing – stronger than any instinct known in the animal world. Just ask any inhabitant of Detroit about Death Breath – you’ll get a fearful glance as an answer.

Death Breath remains a local problem, only Detroit and part of Illinois have been affected so far. This is why not many outside the region have heard anything about the plague – after all, it’s been spreading for only a couple of weeks. However, when the news of the human-transforming disease reaches a new spot, when the first stiffs (as the infected ones are called) appear on the streets, all other problems suddenly become unimportant. There’s no room left for other problems – fighting DB is a matter of life and death.

The pundits continue to speak at great length over the nature of the DB-triggering microbe. It is said to be a virus, but an egghead from any lab would object to this classification. Anyway, a normal person doesn’t give a damn about theoretical bullshit – what’s important is what the cursed thing does to humans and how to protect against it.

Death Breath is spreading through direct contact, scratches, injuries, etc., but it is also said to attack an organism via the lungs. The abomination is hugely atypical – it’s difficult to even pinpoint it in samples, not to mention screening for it using standard chemical analyzers. When the same sample was correctly tested five times, the bug was found three times and there was no sign of it twice – when this happens, the wiseacres can only throw their hands up. The virus is as unstable as a mellow Hegemony guy, and we’re still waiting for some genius to discover what it needs to become activated.

DB does not seek to totally transform a human body – it doesn’t kill, it modifies. It does so systematically, tampering with all possible internal systems – from one’s nervous system to the urinary one. Yo could think it’s actually for the better – it can’t be denied that some changes increase the capacities of an organism. There’s only one slight problem – the side effects. When the “treatment” is over, whatever is left of a human being resembles anything but a human.

Evolution of the disease

First symptoms
When a carrier becomes infected, he or she may not even notice that for the first few hours. Some report drowsiness, the others feel week, but many see nothing disturbing until the end.

Acute condition
It is only after several hours that a person is suddenly struck by high fever, a splitting headache, pain of muscles and joints. Sweat trickles down in streams, and the overwhelming weakness reduces a person to a crawling, groaning wretch. This is about the right moment to say goodbye to your friends.

Critical state
The sick person loses his or her consciousness – this is called “shutdown” in Detroit. For an hour or two, they will just lie there, motionless, as cold as a corpse. Only the barely noticeable breath is an indicator of what’s going to happen. Following the example of Hurons, some neighborhoods now request to immediately butcher any shutdown individual, even if it’s your mother or an insurance agent.

Terminal condition
When the sick one regains consciousness, all hell breaks loose. It won’t recognize friends or family, even the previously loved ones; it becomes a monster filled with blood lust.

It’s hard to tell, how long it will live if left alone – those kept in hospitals are given food. The others roam the streets feeding only on their prey’s raw meat. One thing is certain: DB is not a mere spot that will come off on its own. The changes to the body are so intense they seem irreversible.

Only a blind man could fail to recognize a ravening diseased one. Unless it’s pitch dark and a stiff sits there calmly waiting for easy marks, that is. The virus wreaks havoc in the body – the skin appears burnt, it’s slick and wet from sweat, fat, and some repulsive ooze. The grimace on a hardened face is so grotesque that it wouldn’t become even Patti.

But that’s nothing compared to what happens inside. The muscles may look like frozen tripe, but their performance is astronomically heightened. Unfortunately, this does no good to one’s motor coordination – the stiffs are very unwieldy in their movements, and they find it difficult to run. Their nervous system is toasted – like popcorn. They fear nothing; they know no pain. They don’t mind losing an eye or a hand – if they can, they press on. Not much is left of the character or intelligence, either. Some individuals can handle a simple tool, but many rely on the strength of one’s arms and teeth. In the dark, their vision is as good as an owl’s, but bright light dazzles and irritates them.

So far, the most effective remedy to solve the problem of the infected are solid bullets or grenades, or – as a last resort – a decent fire ax. The work to find a genuine cure continues, but this search is far from over.

Everything would be so much easier if the people of Detroit knew the cure actually existed. Not that it’s conveniently within reach – it’s guarded in the fortress of machines – but we can’t say the case of the vaccine is hopeless, either. What could Moloch possibly use it for? On one occasion – before the virus was let into the city – DB got out of hand, broke free and crossed the barrier of the sector it was supposed to be contained in. All mutes bred there were infected, and the situation was only restored to normal once they were given the serum. But even Moloch cannot reverse the effects of the virus after it settles in an organism for good. Is seems that after about 48 hours after the shutdown, the infected person can no longer be saved. It also remains to be seen whether what worked for mutes will produce the same results in humans. The base we’re talking about is located in the Eastern part of the Second, the enclave responsible for DB, which the Outpost’s maps refer to as object M2271. It’s a shame, though, that the computer-aided smartasses still don’t know what the place is hiding.

The infected individuals pounce at anything alive (unless it’s a pot plant), but they rarely fight amongst themselves. Apparently, the still functioning tiny bit of their brain is capable of telling the sick ones and the healthy ones apart. Not only that, the stiffs like to keep together and move in hordes. Probably there is nothing more to it than a simple herd instinct, but the way they move around the city is pretty much like scouring the area.

The hordes are often accompanied by infected animals – mongrels, cats, rats, sometimes even birds. They are not many, but the species barrier is not impenetrable for DB. To flourish, the virus needs more complex organisms – the more its host resembles a human being, the more likely it is to become infected. So as for the bloodthirsty ants or zombie turtles, you can forget those, but we wouldn’t disregard the rumors about the marauding murderous gorilla of Windsor.

To say that the Second is responsible for DB is as revealing as to say that two plus two makes four. It’s not even the Pandora’s box found near the Gas Drinkers zone. The best proof is its experiments on the diseased. Moloch tries to cyborgize the stiffs.

It fills them with implants to transform them into robots, subject to Mothers’ will. What these creatures can do is usually not far better than Hunter’s abilities, but from time to time a metal man will procure a better brain to be put into a stiff. Then, some improvements are also added – ones to help the diseased ones in their butchery trade: fixed saws, blades, chains, and other tinsels. And there are also others – results of experiments that even the most wicked Frankenstein wouldn’t dare conduct. We dread to think what else Moloch can cook up using the Death Breath victims. One thing is sure – it is pretty damn dangerous above the lakes these days.

The city in chaos

Detroit struck with the virus is a place of utter chaos. Individual districts are being closed down partially or completely; there are patrols on the streets; more and more often people shoot at strangers just in case they are spreading the disease. One after another, local gangs see this as an opportunity and attack the neighboring ones to establish their dominance. The main buildings are now fortresses, and folk from the more secluded areas flock to the center, terrified with what happens in the ruins. The Schultzes declared a state of emergency, soon followed by most of the other gangs. What used to a ballsy city is now a bloody cheerless place to live in.

Only the League is still run as always – most of the racing is taking place, even though Humpty “D”, a revelation of these last weeks, drove right into a roaming band of stiffs and was instantly reduced from a star to a dinner. A small change was introduced to the rules – for each stiff run down, the racing team gets a bonus: 5 liters of decent fuel. Obviously, the first beneficiary was Humpty’s widow.

Outside the city, the situation is peaceful apart from those who try to get out and cannot keep their own belongings from harm. Although Moloch could use DB to affect much bigger areas near the front, for some reason it doesn’t. Perhaps it lacks the necessary resources; perhaps it doesn’t want the virus to turn against its children. Or perhaps for Moloch Detroit is a gigantic lab where it observes how the two-legged laboratory rats called humans can cope.