Today we share with you the second in a series of design journals from Cry Havoc designer Grant Rodiek. Enjoy!

In the last post, I detailed the origins of Cry Havoc and its first year of development. Where we left off, the game was playing decently and some major changes had been introduced. Now, I wanted to find a home for it. 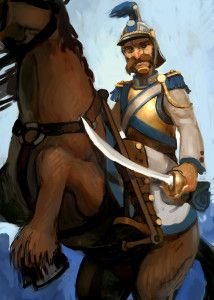 After Gen Con, one publisher expressed interest and I sent them a build of the game. I waited the customary few months in silence. Finally, I reached out, and was told that the game wasn’t a historical game, and therefore wouldn’t be considered. I found it odd that the game was evaluated in the first place, but these things rarely make sense in my experience.

Thematically, though, I did think the game needed to be re-evaluated. Many of the abilities in the game had science-fiction like powers. In that, the guerrilla units could more or less teleport around the world, which felt a lot more like 2240 than 1840. Therefore, I looked to my other love, which is hard science fiction. Hard science fiction is similar to the aesthetic in Aliens. Realistic technology, versus the instant warping in something like Star Trek.

I named the game Dawn Sector, and found easy comparisons for the units that in some ways have influenced Cry Havoc. The cavalry based Royals faction became the mechanized faction. You see a machine army in the final game. The guerrilla faction became the high technology faction. The humans remained as the highly defensive, heavy artillery faction. Ships became rockets, and to space we went. 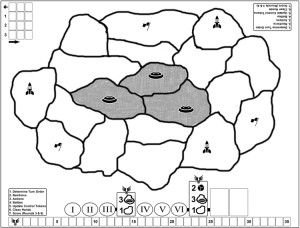 I continued to iterate on the presentation of the game and dove deep into the balance testing of the factions and the accessibility of the layout. I played the game with my then girlfriend, who doesn’t play games at all, to see if it made sense. I braved the winter of Milwaukee to test it at a Protospiel, where my friend (and now Portal employee) gave me strong feedback that kept me going. 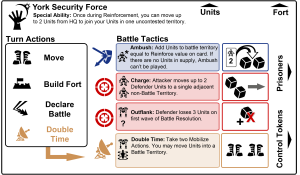 I looked around for publishers, but nobody popped out. I spoke to some friends who have a small publishing company, but the game wasn’t quite the right fit for them. They were enthusiastic, but wary, which I understood. I had some publishers ask to see it because they wanted a miniatures game, but I didn’t quite want to work with someone who wanted a miniatures game. I wanted someone who wanted York. 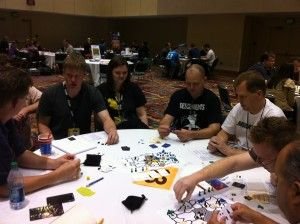 I kept testing. I implemented generic factions, which shared a few abilities, so that players could begin the game on equal footing. Then, once players knew how to play, they could flip their boards to play the advanced, asymmetric factions. Think of it like the base faction in Tash-Kalar. I was optimistic, when I hit the stumbling block of self doubt.

You see, I finally read the rules to my copy of Horus Heresy, and discovered it was a card driven combat system. Not exactly like mine, but similar. Then, Kemet was released. It also had a lot of similarities. The area control element, the unique powers, the combat. It was pretty depressing, especially after almost 18 months of work. I wrote a despondent blog post, fearing nobody would want my game, and decided to give up. One of my Protospiel testers emailed me to say I should keep going, but I gave up. 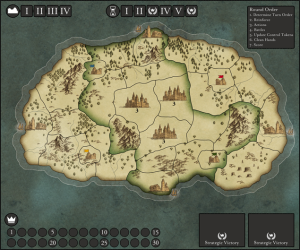 I stewed for a month, then decided I’d make a version for just me. Print and Play Games can make really nice, high quality games. I hired John Ariosa, one of my favorite illustrators, to illustrate the cards. I hired an amateur cartographer to draw the map. I ordered two copies, gave one of them away, and figured I’d keep my copy for myself.

Shortly before the summer, I remembered a publisher that made a game called Neuroshima Hex. I looked at their other titles, and noticed that they made a lot of games with conflict, a lot of games that could be described as “trashy euros,” and a lot of games with factions. I sent them an email and said I’d love to show them my game at Gen Con 2013. Months went by with no response. I figured they weren’t interested.

Then, I received an email from Ignacy. He was interested. In fact, he had looked the game up on BGG, read the rules, and watched my demo video. He wanted to see it at Gen Con. I stalked Ignacy like a weirdo for 4 days at Gen Con. He taught me Robinson Crusoe on Thursday night, which is one of my all time convention highlights. But, he was busy at the Z-Man booth showing Robinson, which was THE game of Gen Con. Finally, just before my flight on Sunday, I showed him York.

I began the pitch, and he cut me off: “Show me the game.” Stumbling, flinging cubes around, I setup the board, and walked him through the actions, the battles, and the scoring.

“This is brilliant. Can I take it home?” In my mind, I’m thinking “You can take anything I own home.”

“This is not a game yet. We need to change some things.” Ouch! But, sure! We discuss and begin independently testing things. Weeks go by. A month goes by. Two months. Three months. Finally, in January, Ignacy sends me a Skype. “Do you have time to talk?” Yes, of course! Let’s rip off the band-aid, right?

Ignacy tells me the game lacks theme and story. It lacks blood. I agree. He notes the game needs more variance, as it’s too deterministic. I agree. He tells me we should do more things with the Buildings. At this time, the game ONLY had the Fort. I loved it, but wanted to expand it. He asked if I was okay with discussing Events, expanding the Buildings, and broadening the game further for more strategy. Yes, yes, yes.