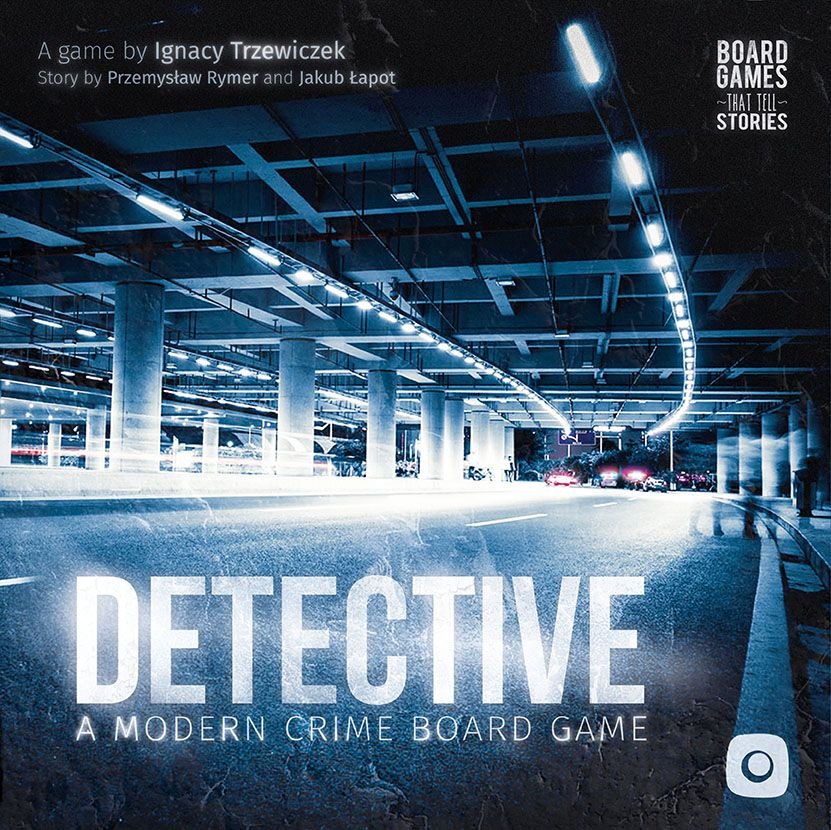 Detective is a cooperative, crime solving board game brought to you by designer Ignacy Trzewiczek and author Przemysław Rymer.

Gliwice, Poland – March 14, 2017. Today, Portal Games announced their first release for 2018. Detective: A Modern Crime Boardgame is a story-driven, cooperative game for 1 to 4 players. The game will ship with 5 scenarios that can be played independently, or worked through as a complete campaign. The game will blend printed elements, with a complimentary online component which will allow players to investigate clues through their favorite internet-connected devices.
In Detective: A Modern Crime Boardgame, the players take on the role of investigators working for the government agency ANTERES. Investigators will be given login credentials to the ANTERES online database which contains data about suspects, witnesses, and documentation from arrests and trials related to their case. Players will be free to use the investigation manual, ANTERES database, and any other online resources they may find to help them solve the case.
Detective: A Modern Crime Boardgame brings classic puzzle-solving gameplay into the 21st century with the introduction of online elements. “The Fourth Wall is a well-known concept in theatre. With Detective we are breaking this Fourth Wall,” said designer Ignacy Trzewiczek. “We offer an immersive experience like no other. Players are not playing a character who investigates crime, the players are actually investigating the crime. Players have all modern tools available. They are able to search Wikipedia to confirm some information, or check the history of World War II to verify a witness statement. At Portal, we design board games that tell stories and this time once again, we have extraordinary story to tell.”
Detective: A Modern Crime Boardgame will be released in 2018. The game includes 5 scenarios for players to explore and many high-quality components. Price and final component list will be determined at a later date. For more information, you can visit our website at http://portalgames.pl
Portal Games is a publisher of award-winning games such as Imperial Settlers,
Cry Havoc, Tides of Time, First Martians, and Neuroshima Hex. Founded in Poland in 1999, Portal Games has developed into one of the most renowned European game publishers and design teams. Their commitment is to produce only the highest quality Board Games That Tell Stories.