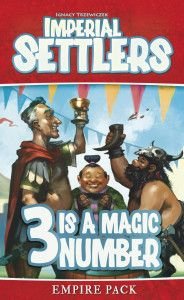 The next Empire Pack expansion in the Imperial Settlers line.

This expansion introduces a new rule: SET. This new ability allows players to score and trigger new effects each time they build 3 cards in a particular color, so called SET. With that rule drafting phase and choice of a right card to draft is even more interesting!

“I like the fact that with this expansion the draft phase gets even more interesting,” Said designer and CEO Ignacy Trzewiczek. “You are not only looking at the abilities of cards, but now you also want to collect particular colors to build sets and activate your powerful feature cards. It’s fun!”

Portal Games is a publisher of award-winning games such as Imperial Settlers, Stronghold, Tides of Time, Legacy, and Neuroshima Hex. Founded in Poland in 1999, Portal Games has developed into one of the most renowned European game publishers and design teams. Their commitment is to produce only the highest quality Board Games That Tell Stories.