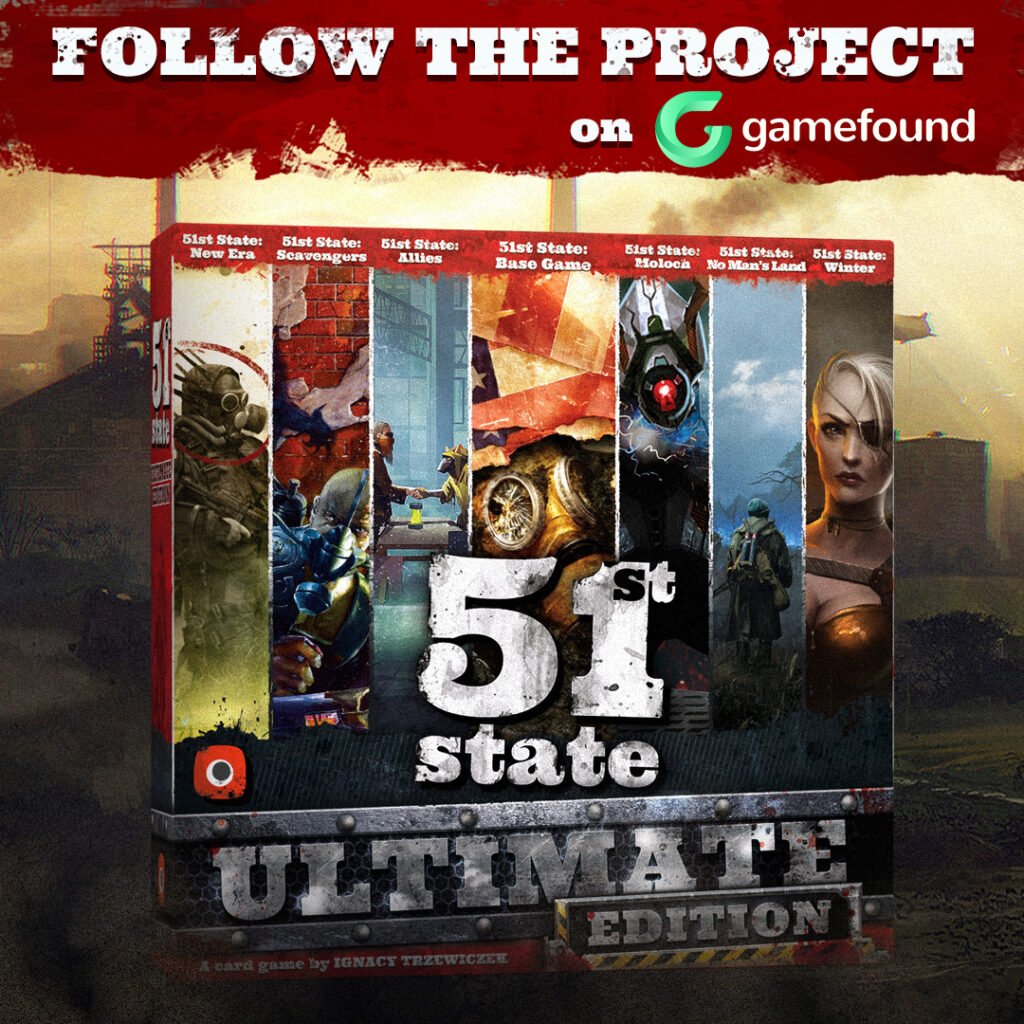 Originally published in 2010, 51st State was a breakout success for Portal Games. Set in the same universe as the fan favorite Neuroshima Hex, 51st State offered players a new way to fight for resources in the wastelands of America. The release of the 51st State Master Set in 2016 brought together the core game and both the original expansions, Winter and New Era in one box with an all-new look and improved gameplay. Three additional expansions have since been released for the Master Set, growing the line to a fan favorite. Portal Games wants to give players the definitive experience they deserve with the 51st State Ultimate Edition.

The 51st State Ultimate Edition coming to Gamefound will combine all the current content for the 51st State into one box. This will include all eight faction boards, promos, mini expansions, and all three expansion packs: Allies, Scavengers, and Moloch. There will be significant component upgrades to the resources as well, and additional content.

The Gamefound campaign is also bringing an all-new expansion, No Man’s Land, designed by Ignacy Trzewiczek, that adds a unique twist to the core game: area control. Players will fight for dominance of the no man’s land scattered throughout the wastes. There will be a pledge option for players who only wish to receive the No Man’s Land expansion. The new expansion will fit into the 51st State Ultimate Edition box.

“Fans always ask for more 51st State content,” said Ignacy Trzewiczek, the President of Portal Games. “I knew I wanted to revisit the line and design something new for the fans, but I also wanted to give new players something really special. I think everyone will be amazed by the brilliant component upgrades in the 51st State Ultimate Edition.”

The 51st State Ultimate Edition campaign is set to launch on February 22nd, 2022, and run for 14 days. The draft page goes live on January 17th for fans to get an early look at the exciting new content.

Portal Games is a publisher of award-winning games such as Robinson Crusoe: Adventures on the Cursed Island, Detective: A Modern Crime Board Game, Neuroshima Hex, Imperial Settlers, Empires of the North, and Tides of Time. Founded in Poland in 1999, Portal Games has developed into one of the most renowned European game publishers and design teams. Their commitment is to produce only the highest quality Board Games That Tell Stories.