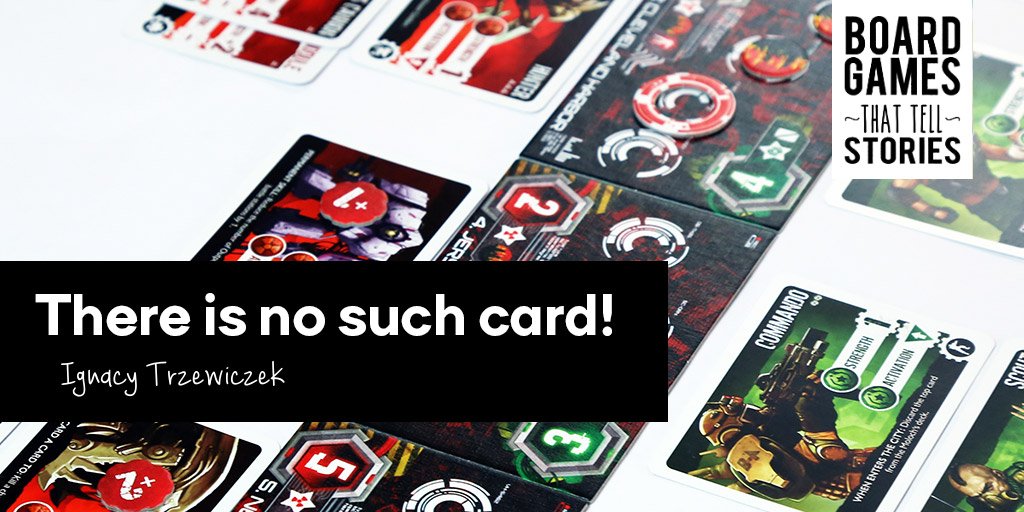 I am playtesting my new game with my wife Merry. It’s a draft version, very early stage, just a few cards, and me checking if there is any potential here. Turns come and go. Step by step Merry is getting stronger and finally, I can see nothing’s going to change – I will lose terribly. I was beaten. She kicked my ass. The prototype seems to be cool, yet the cards have no balance whatsoever.

I draw one of my last cards. It’s Commandos. There is no text nor symbols on it. Just the title of the card and cool graphics. I didn’t have the slightest idea for the mechanics, only a cool title, so a few hours earlier I just tossed this card into the deck. Very clever. “Trzewiczek style” they call it – the story always comes first. Have a cool title, and then you’ll worry about the rules.

And so I draw this stupid Commandos and with a poker face, I put it on the table saying “Commandos. I won.”

If I had to buy her some contact lenses just at that moment, they would have to be the bottom of a jar size.

“What?” she asks almost completely speechless.

I lost miserably. The only thing left for me was to tease her a little bit. “Well, I drew Commandos. When Outpost draws that card, they win? And so I won.”

Merry didn’t believe what she’s just heard. “There is no such card!”

I keep my face straight. “There is. As you can clearly see here. Commandos wins the game.”

All I could do is bursts out laughing.

Two days later, the Commandos has its abilities described. Maybe it does not win the game, but… but still gets to be my favorite card in the whole deck.