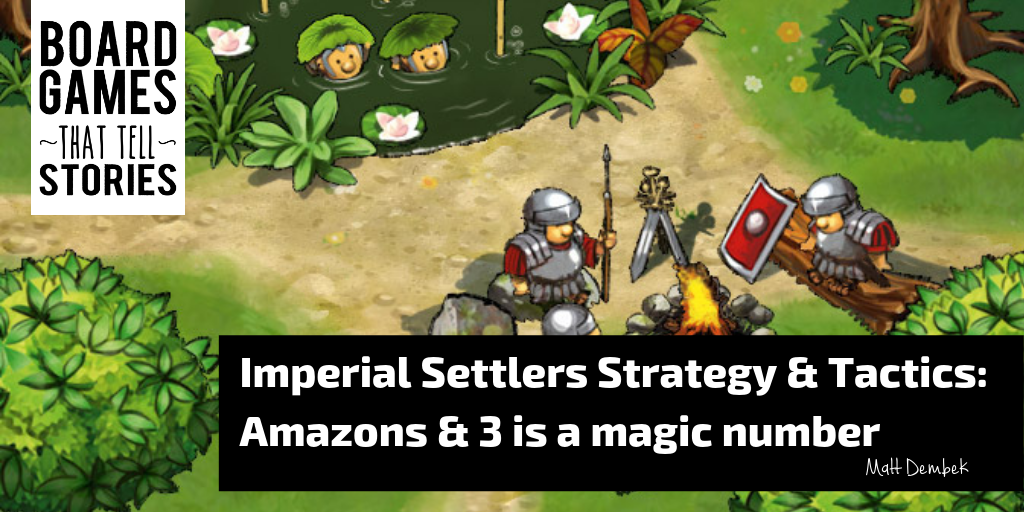 Two weeks ago we tackled ‘Why can’t we be friends’ expansion for Amazons, now it’s time to go for their fierce set collections within the next expansion: 3 is a magic number. Harmonia will be watching over our deck to make sure, that we’ve prepared our cards properly to get the most out of Amazons when we decide to use it when building our deck. We could say that with this expansion blue is the new black.

Like before we present some unique options in our opinion, but those are not the ultimate choices, and you are more than welcome to create your set scoring configurations and share them. So what options do we have when we want to include 3 is a magic number expansion into our Amazon deck to have optimal choices and use set tactics to its best?

First comes a single card with three copies called Harmonia’s Fountain and the cards to replace it with.

Harmonia’s Fountain is a base of this expansion, most cards focus on its set collection effect and since it gives lots of Victory Points its best to replace it for the Flea Market and keep the Mythic Tree card, that provides wood production which is much needed to build other constructions that come within this expansion. The Recon Team is always good to keep that manipulation options, but its also a great alternative to consider, having two scoring options both from Flea Market and Harmonia’s Fountain might be great in the long run.

Blessing of the trees and Tree of wishes are the two cards with two copies each, and here we have some options to include those in Amazon’s deck, but keep in mind blue is the key here!

Tree of wishes
Free Building bonus effect from the top three cards and an extra option to get rid of the cards that aren’t blue and won’t combine with Harmonia’s Fountain effect is a no brainer. We recommend replacing the Statue of Midas with it, sure maybe the statue brings a nice building bonus that Tree of Wishes could use, but since most of the other two copies cards are blue or black and will take advantage from other cards, it’s just safer to go for the only gold one in the main deck.

Blessing of the trees
The Blessing is a fantastic card to be played with Harmonia’s Fountain. Other players tend to raze common scoring cards almost right away when those appear in front of us, but with the Blessing of the trees, we don’t have to worry, it allows us to get something extra from all the Foundations left over inside our Empire. We recommend replacing either Young Warriors or Ambush with it since we don’t need pink cards that much right now.

Single copy cards include: Little War; Temple of Ares; and Outpost Network, these cards will take most of its advantage from the Black cards and the ones with building bonuses.

Little War
Great card in combination with our black color cards, we gain resources every time we built black cards. That’s why we’ve left most of the blue and black cards in our deck, and we want to have great combinations between those cards. Our first pick to include the Little War card would be to remove The Capital. Sure it’s storage feature is neat, and its a three-color card, but its neither blue or black, so let’s just remove it.

Temple of Ares
Another card that favors blue and black cards in sets and will let us get that snowball effect momentum. Gaining a card and sword for each new set of two blue and a single black card will push forward the game at a fast pace. So what we should give up for this card? We would recommend Secured Garner, another not needed color in our set collection tactic.

Outpost Network
The last card in this expansion will allow us to score some extra Victory Points at the end of the game, for each card with Building bonus in our empire. Here, even though we have some more cards of unwanted color in our deck left, we would recommend Rear Guard to be removed from our deck. Yeah, it’s a black card that works well with the two cards mentioned above, but the effect of it, which strikes our opponents and doesn’t give much of strategy options to us, makes it an optional choice.

So here it is, another Amazon expansion another set of choices delivered to you, to try and have fun with the deck building mechanism in Imperial Settlers. Give us your feedback for those Strategy and Tactics posts and if you would like to see more of those including other factions.