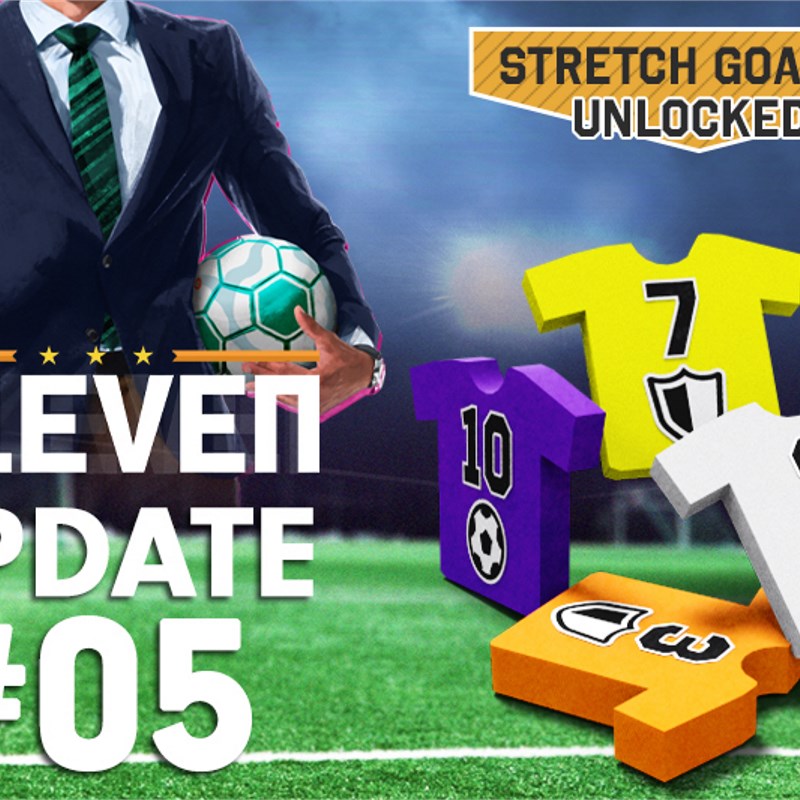 Hello,
Cristiano Ronaldo is back in Manchester United. Today he played the first match. I am excited. Did you watch the game? Did you expect him to score? Were you…
Ah, we are here for the campaign update. You right! 🙂

Feedback
I want to thank you for your super positive reaction to our yesterday’s idea for Geek-inspired sponsor cards. There’s been a ton of ideas in the comments, and on Monday, I will reach to the ones that you mentioned the most and to the ones you mentioned, along with the idea for the rule. I hope some of them will agree to be part of the game. It really feels great to see your engagement in the project. I appreciate this.
Video content
On Thursday, I did a short, 30 minutes AMA about the Eleven campaign. If you have a spare half an hour after watching today’s matches, you can watch the interview here. I hope you find there a couple of exciting pieces of information about the origins of the game and the dev process. Link is HERE.
Price, again
At the start of the campaign, there was a controversy about the game’s price and expansions. We reacted by creating a bundle, and I personally promised that we would look into any other ways to lower the price (the most promising is increasing the planned print run, but it depends on the success of the campaign). In the past week, two important industry events happened, and I wanted to share with you links.
The first one is an article from the publisher Board&Dice. It is a very transparent breakdown of the production cost of games with a very honest commentary on how the process changed this year and how it affects the MSRP of games in 2021 and forward. You can read it HERE.
The other one is even more shocking – yesterday, Asmodee Group announced the increase of MSRP on a massive part of their catalog. You can read about it HERE.
How do expansions work?
In the updates, we discuss how the game work. Thomas every day explains to you a particular part of the game. He will also cover every expansion in the upcoming updates. Before the campaign ends, you will be 100% informed about every piece of the content we offer here.
Sunday break
On Sunday, our team will spend time with families and will not be answering your questions in the comments section. Please, respect their right to have a short break from the campaign. They will be back with the full energy on Monday.
There will be a short Update tomorrow, and there will be an awesome Unlock too. Visit us on Sunday! 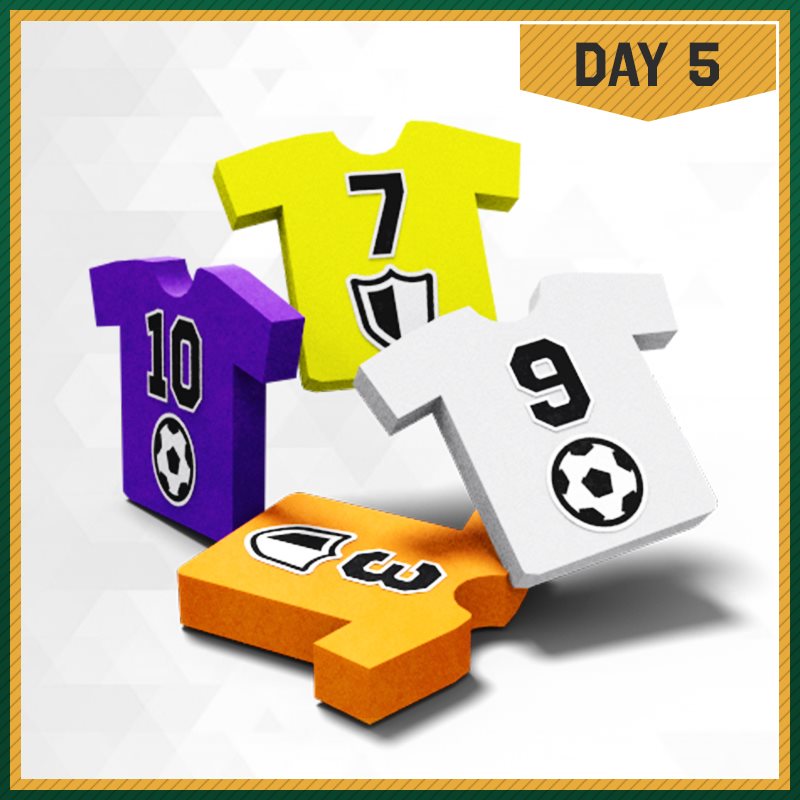 It’s time for wooden markers with double sided screen printing to replace the Jersey tokens (52 custom wooden pieces)!
These 52 wooden Jersey shaped markers in 4 player colors represent the Players on your team. When planning your tactics before each match you place these markers on your Team board.  Each screen printed marker is double sided and shows the Players number and designated role in the upcoming game—offensive or defensive.
This component upgrade is a Gamefound Exclusive Stretch Goal for Eleven. It won’t be a part of the retail version of the game. All Stretch Goals will fit into the box.
I hope you enjoyed this epic upgrade today and not it is time for Thomas to discuss the design process!

Resources
It’s all about the money at your club, isn’t it? Well, no. Just like in real life there is more to it.
The 4 tracks on the center board, which is called the boardroom, provide you with resources: Budget, fans, operations, and fitness. At the start of each week, you gain resources according to these tracks. If your budget marker is at 3, you gain 3 Euros. If your fanbase marker is at 2, you gain 2 fans, etc. Resources drive the game. 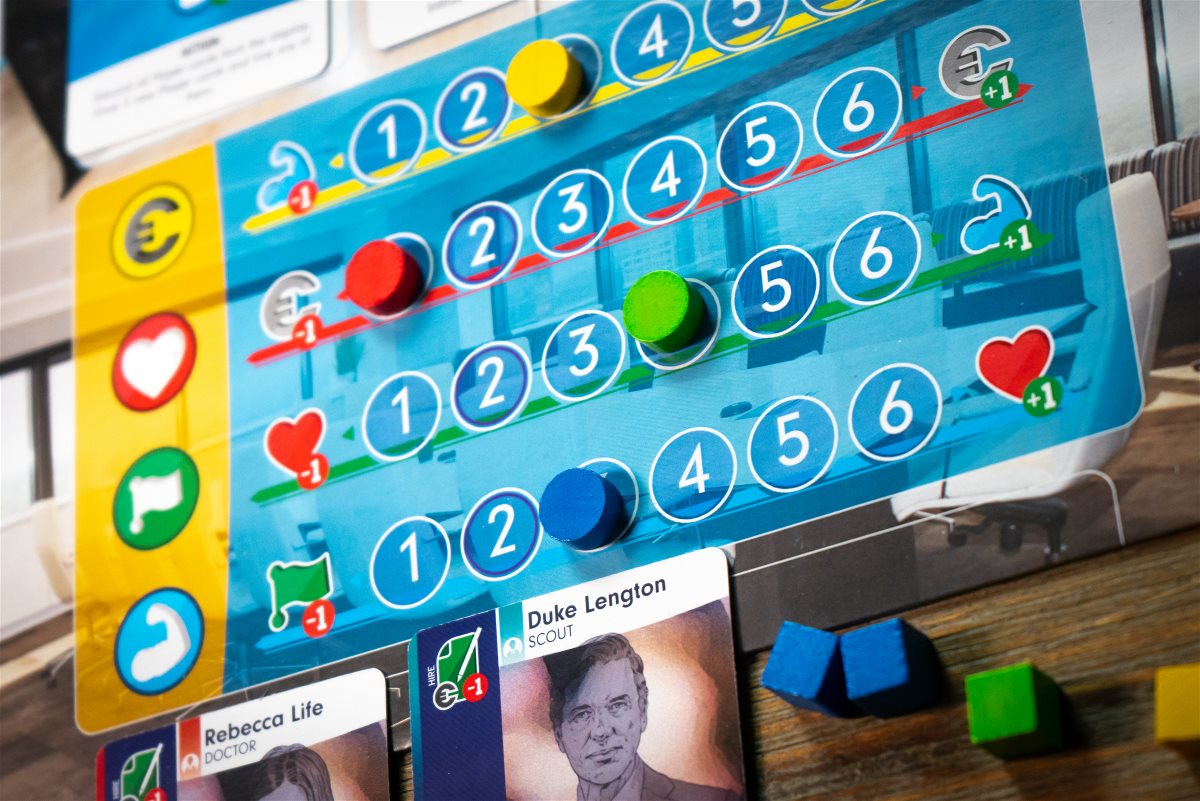 You need Euros to buy players, hire staff, build stadium expansions, pay for maintenance, etc. If you have a board that doesn’t care about money, you probably have to pay for their expensive decisions as well.
You need fans to… Of course, you need fans! Open up your stands in the stadium for them. They will increase your income and even can make players perform better. Besides that, fans can influence the board. If they make a decision they don’t like! Use fans to complain: Use fans to reroll decisions. Remember the Super League? No? That’s because of the fans.
The operations track shows how efficiently your organization is run. If you have a well organized club, you can get more things done. You can pay 2 resources to do an extra free action each turn. So if you do well here, you may perform as many as 6 actions during a week, while some players can only do 3. Sometimes you use operations resources to pay for certain actions, provided by the staff.
Fitness resources influence the team. If you have a lot of fit players, you can all put them in the lineup for the upcoming match. Pay 1 fitness resource to every player card you want to have in the team. A lot of players have a special action they can do during a game. For these actions you need to pay resources too. 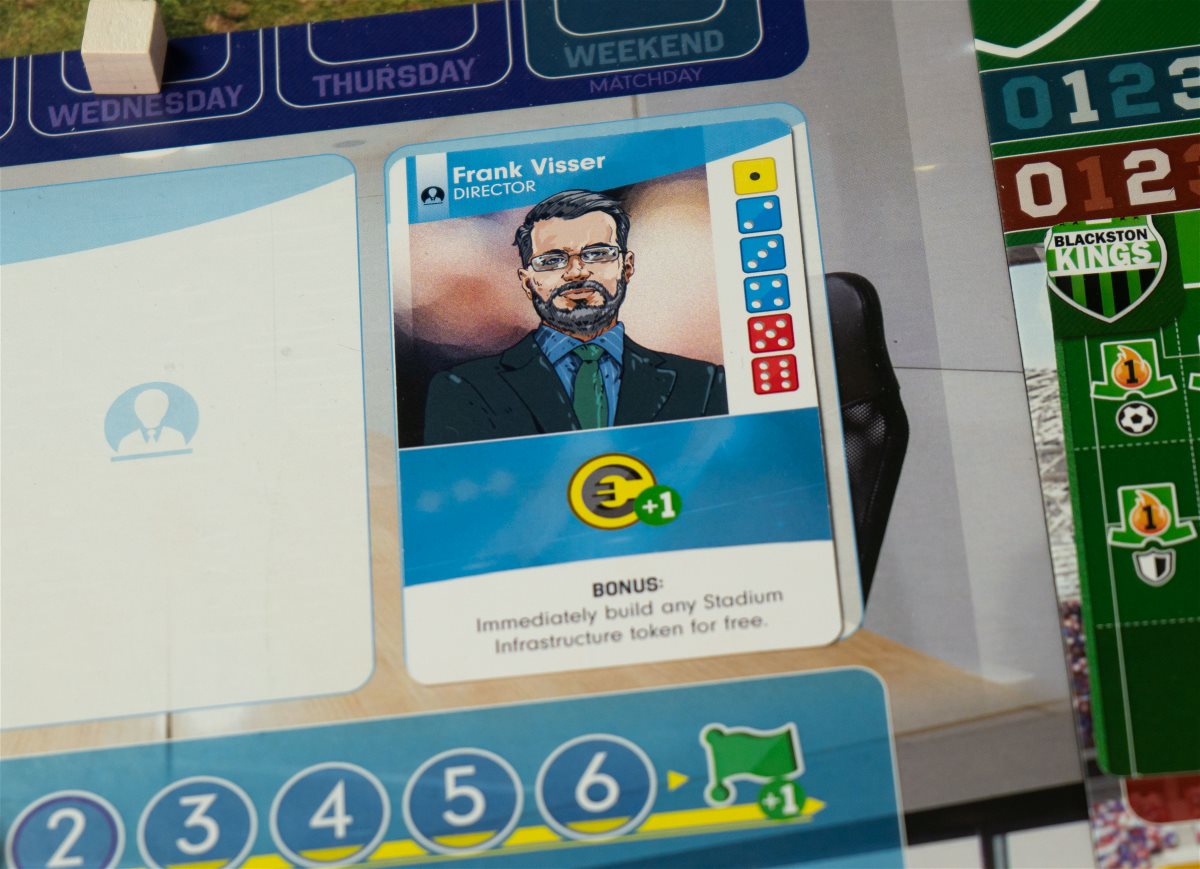 Every player starts with their track markers in different positions. This is determined by the directors you hired. Once again: Choose them wisely. They are really a bunch of stubborn guys. The tracks all start at 2, but the directors will give bonuses or penalties to the markers on the tracks.
But how do you get more resources? You can earn them in a lot of different ways. Sponsors will give you Euros. Staff will give you other resources too. Think of a fitness trainer, who provides you with additional fitness markers, for example. Or a steward who brings in new fans.
It’s even better to increase the track markers. They will provide you with extra resources each week. After each match, you need to roll for match consequences. Sometimes your players get injured. Sometimes they increase or decrease the tracks. For example, if you win, there is a big chance, you may increase your fans’ track.
There are more ways to get your resources or increase track stats, you will discover that soon. All in all, resources are the core of the game. You need all 4 of them to win a game, no matter which of the many strategies you choose to play. Remember, money can’t buy you everything. Good luck.

And Ignacy is back with…
Today instead of discussing club, I want to share my few cents about Cristiano Ronaldo. Along with Messi they made this past decade amazing time. It is a very unusal time this season. Messi left his beloved club and went for a brand new adventure in the unknown – PSG. The opposite happened to Ronaldo, after great time in Real and Juve he decided to slowly get back from adventures and get to the club where his career exploded.
These two great soccer players keep gaining our attention. The discussion who’s better was always vivid. Natural born talent of Messi, or extremely hard work of Ronaldo, they always were great, but so different.
And even today, in the transfer window, they did something different.
And press, and fans, can discuss and argue.
I am happy Ronaldo is back in Premier League. Do you?