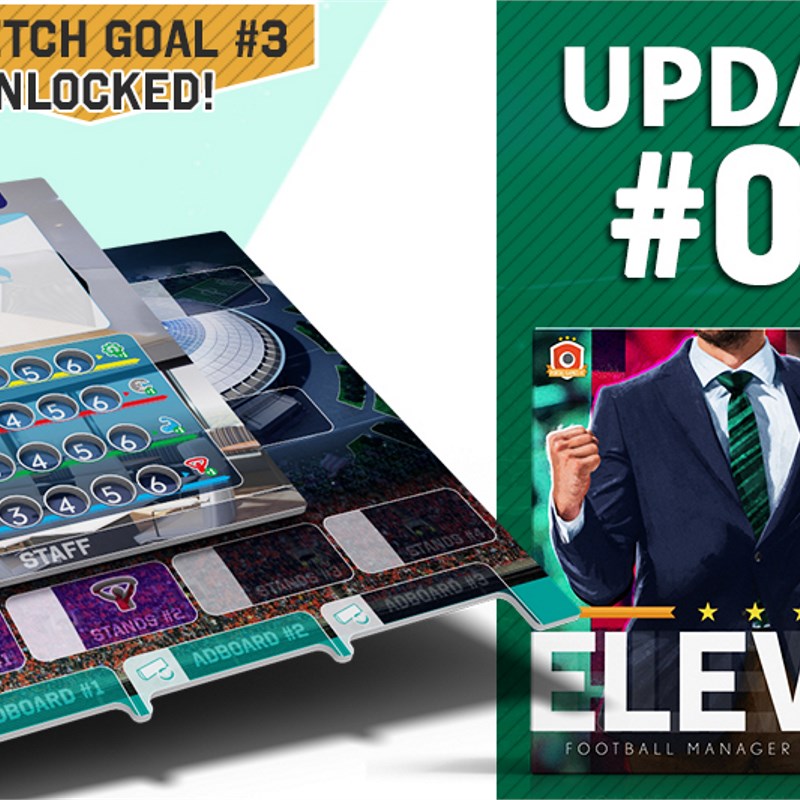 Hello, hello
This is – as always – Ignacy Trzewiczek, and I must confess: I was wrong! I made a terrible mistake!
England did not defeat Poland yesterday! Quite the opposite, after a very energetic and engaging match, the final result was 1:1, with Poland having more clear goal chances than England!
My prediction was terrible. Luckily, I am head of dev at Portal Games, not a head of the predictions department!
Let’s go to the brief update; many important topics arose!

Rulebook PDF
Today we added Eleven rulebook to the page, as we saw many backers were asking about it. It was already published in the TTS mod, but not all of you use TTS.
Please, notice, this rulebook is an early version. We are very open to all your suggestions and comments about the clarity of the rules. This text is before native speaker editing, so there are many grammatical mistakes for sure; please, don’t be worried about that part. But if you see some parts hard to understand or explained in the wrong place or you have any other general thoughts, we are here to listen. Please, don’t hesitate to send us an email with comments to portal(at)portalgames.pl with the subject: Eleven rulebook
We appreciate your feedback here.
Language editions
There are also questions about the schedule or timing of language editions compared to the print of the English version. I am happy to inform you that the whole print run is scheduled at the same time. All editions will be produced together, and there is no difference in time. Obviously, due to the logistic, it will be the case that some countries will have the game a few weeks earlier than the other, but in general, the worldwide release of the game next year is planned as one epic event in each country.
Development status
We see – especially on BGG – debate about the status of the development of the game and if the game is ready.
It is not.
This is a crowdfunding campaign. We have a great project. We have a great game. But there is still so much work to do with it. The balance, the money, and the economy are off (you probably noticed that when played on TTS). The matches are still easy to win if you are playing in unrealistic formations (like 5 Strikers); the cards for football players are still not finally balanced.
We came to GameFund with this amazing project; we gave you all the files for you to see how it works and how we work together to make it an amazing game.
Since day one, we have been receiving your feedback through the Google Form installed in TTS. On purpose, we put this document there so you guys can share with us your scores, thoughts, comments. And my team is reading them every day and debating with Thomas, the designer of the game.
Speaking about Thomas…
Goalie!
Many of you are asking about the lack of a goalkeeper. I don’t think it is necessary, and I was very happy with basic formations like 442 or 352, but you guys demand goalie. You want the game to be 1442 or 1352.
Thomas is on it. Yesterday, during the match Poland England, I received from him a WhatsApp message with a video presenting the first draft of the idea. I think there is potential there.
Most likely, you will have a goalie. Even though I personally would vote against it just for the sake of clarity of the rules 🙂
But we listen. That’s always the bottom line in the campaign. 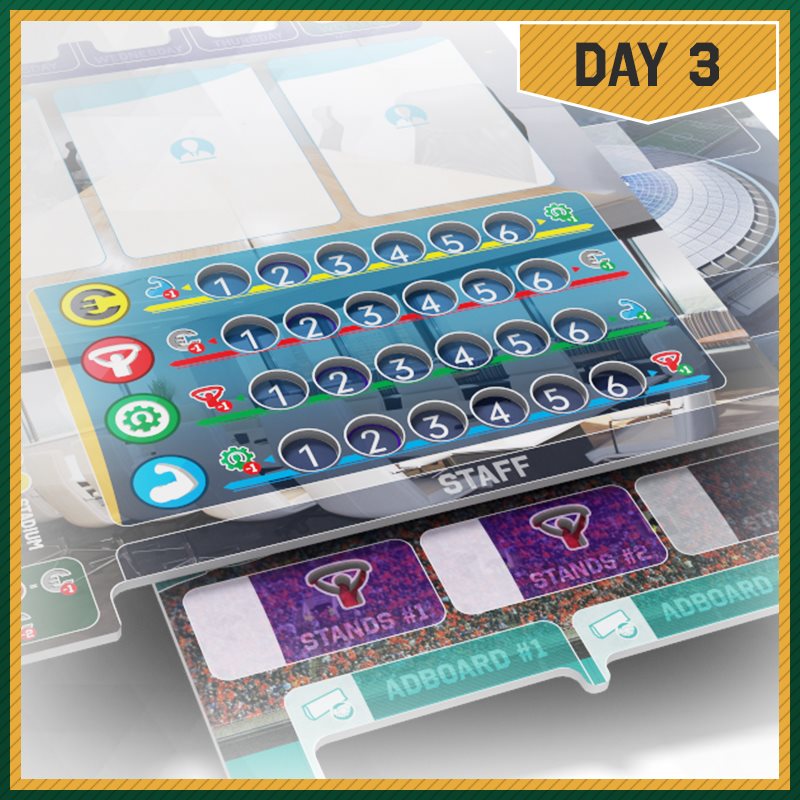 All Stadium and Club boards (8 pieces in total) come with two layers, which allows for the necessary indentations to keep all the cards, markers and tokens in place, even when you inadvertently bump the board.
This component upgrade is a Gamefound Exclusive Stretch Goal for Eleven. It won’t be a part of the retail version of the game. All Stretch Goals will fit into the box.
And now it is time for the designer. Thomas, the floor is yours!

The board of directors
You probably thought you could determine everything at your club. Unfortunately not true. Just like in real professional football, you have to deal with a board of directors. They really think they are important. During board meetings, they will make the decisions for you. But if you have enough fans protesting against a decision, they might change their opinion.
I really like the directors in Eleven. Some are so good at making bad decisions for you. You will hate it. But very thematic! You’ve probably heard Rahdo talk about Mia Walker. No one likes her. 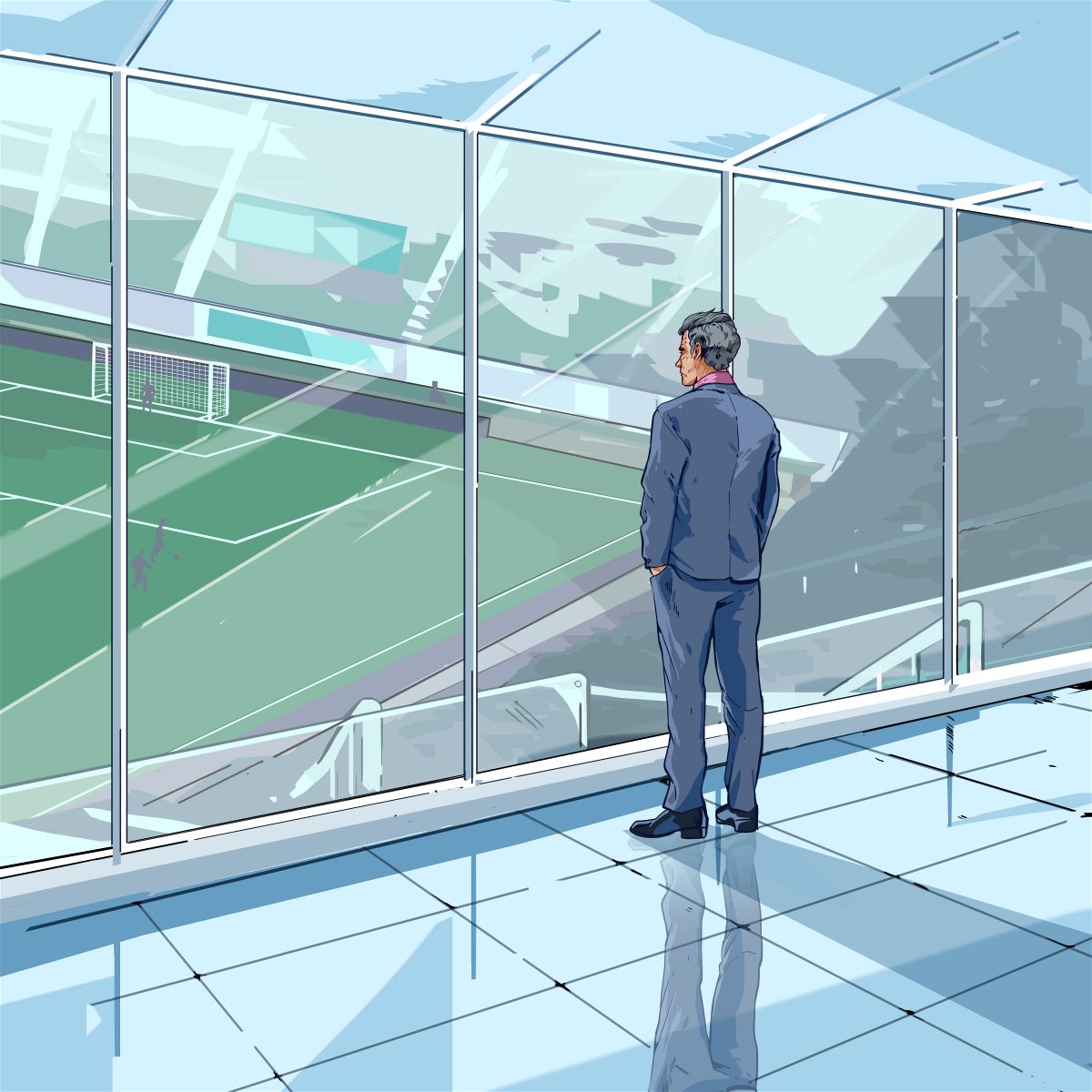 Luckily, at the beginning of the game, you get to choose which of the directors you will hire. This will directly influence your stats. Some are not very popular and will decrease your fanbase, others will increase your fitness. Some may bring in money, and others aren’t operational geniuses and will decrease the number of actions you can take.
But there are more things to consider. All directors have colored dice on them. Yellow, blue, and red. Each color represents an opinion. The more dice of a specific color the more the director will think in a certain direction:
Yellow means money. If your plans involve having a lot of money, you need one of these. They think a football club is a company. It’s all about cash and making a profit.
Blue is for the team. A director with a lot of blue dice, wants the team to perform well. The players must be at their best and as fit as possible. They will do anything for the team.
Red dice are for the people. The fans and the staff are most important. The club is not a business. 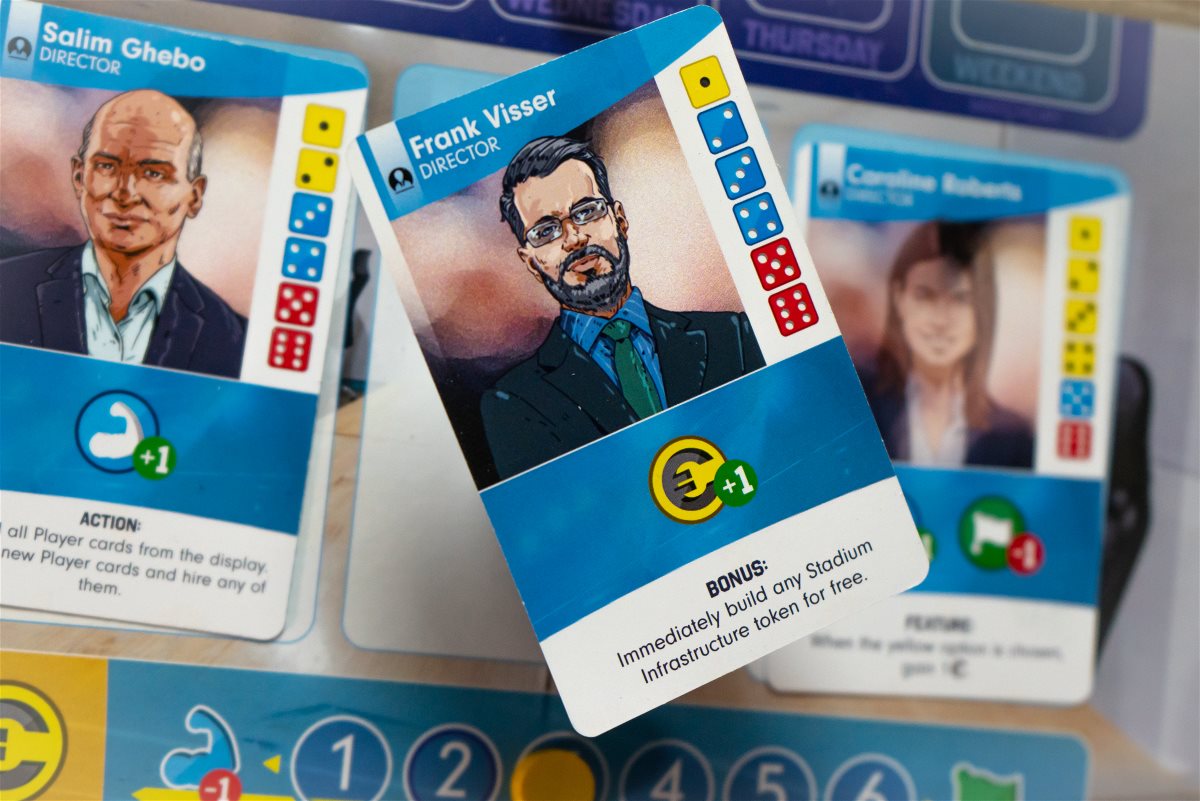 Directors always have 6 dice on them, ranging from 1 to 6. For example, she could have 3 yellow ones, 2 blue ones and a red one. This would mean she thinks making money is most important and doesn’t care much about the fans.
I will talk about the board meeting in another update, but this is where the directors make an important decision. For now it’s enough to know, you roll a die to see what it is.
It’s important to choose your directors well. It may depend on your strategy which directors you want. But if those guys make a terrible decision, there are always the fans. You can pay fan resources as many times as you can, to reroll the die. They will never let the club down! But if they are protesting, they won’t attend the match. Decisions…

Besides game designers and boardgamers, we are football fans too! To give you a little insight, we will tell you about our favourite teams with every new update.
Name: Damian
Favourite club: FC Barcelona
League: Premiera Division
More about it:: Damian works at Portal Games in the Production and Logistics department. He will be responsible for negotiating all the terms with the manufacturer, keeping an eye on the production process and then delivering the game to the shipping centres. Damian is loyal fan of F.C. Barcelona. He is a member of official F.C. Barcelona Fan Club and he goes to Camp Nou to watch his beloved team. He is lucky that Ignacy is football fan too, so there is never a problem to get a short vacation for a trip to Barcelona to watch a match!