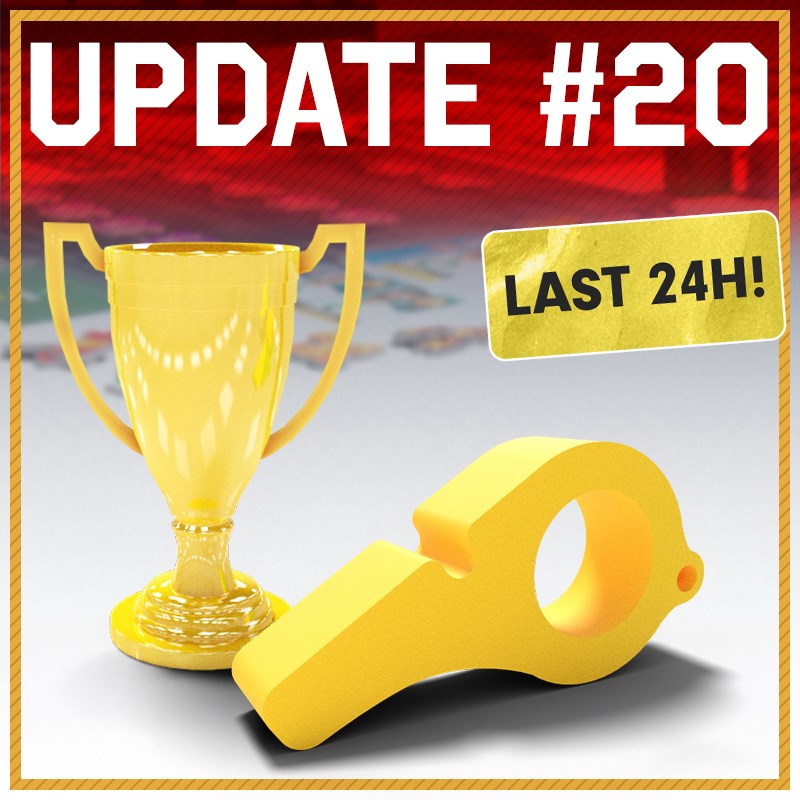 Hello, hello,
Man, these 3 weeks passed quickly. It feels like we started the campaign a few days ago, but no, it was 20 days, and I am here writing the 20th update. It’s almost stoppage time, huh? And all the good teams have some nice surprises for that moment!

Dev report
As Joanna told you in previous updates, we had a board game retreat, and one of the goals was to put Eleven on playtesting marathon and dev brainstorming. We met for 4 days, there was our full dev team and most of our playtesters. And we had an excellent dev session. I am happy to report:
Goalkeepers
We have two solid rules variants. In the playtesting in the upcoming weeks, we will choose the better one (with the other most likely ending as a variant in the Advance Rules booklet stretch goal). In short words – the first has more eurogames appeal, with goalkeepers having their skill level, and that represents how many goals they can cancel in the game. The other is more Ameritrash in feel, as it allows a player to roll for a goalie intervention, and depending on the roll, the goal can be canceled. Both versions will be in playtesting. Adding goalie to the game was our promise after the initial feedback when the campaign started.
Youngsters
Young players will have removed the illustration and the name from the front. Only the position of the player will be depicted (defender, midfielder, striker). Once you transfer him to the club, you can peak on the other side of the card – it shows the name, illustration, and ability you will get when you train him. This change is based on your feedback – in the comments, you said if there is a name or artwork on the front, you will remember the ability on the back.
Match resolving
We improved the resolving of the match. The pitch now has 5 zones instead of 9 – there are two wing and three center zones. It is now much more challenging to create the right plan for the match, as wings are very tempting to use but leave an empty center. The playtesting so far shows that this is the best system up-to-date, and our dev is very happy with it. In the upcoming days, we will update the TTS mod so you can all play with this variant and leave us your thoughts and feedback on the new version.
Realistic formations
We are also introducing the idea suggested by playtesters – the team formation cards. This is a new concept that adds to the setup phase a new element – players will draft formation cards. Playing with these – preferred by club/players/coach – formation the team has a bonus in the match. You can teach Barcelona gegenpressing, but in their DNA, there is tiki taka, right? Once again, kudos to all playtesters and the community for dropping all those great ideas!
Opponent tactic cards
There was concern in the comments that you will memorize all opponent teams, and then you will win each match because you remember their formation. I am happy to report that we came with the super thematic and simple solution – opponent tactic cards. They represent how the opponent coach tried to outsmart you and what surprise prepared for the match. It can be something like: “Unexpected twist – their wings play on opposite side” or “Explosion of the form – their striker has +2”
In that way, even if some of you memorize all opponent cards, you will never be sure what will happen, as the opponent tries to outsmart you!
And more…
And there is more. You put so many ideas and concepts in the feedback (both through GoogleDoc, as well as here in the comments section and BGG forums) that our team was able to tweak many other things here and there. I’d like to thank you all again. I am very proud of what we achieved here – a community-driven development of the best football manager game ever!
Last day
This is the end of the campaign. We unlocked 21 bonuses. Your copy of Eleven will be one of a kind. As samples from the manufacturer came to the office, I can share few photos, and as always, I ask you – please, share the word about this campaign. This is the last day. I appreciate your help. 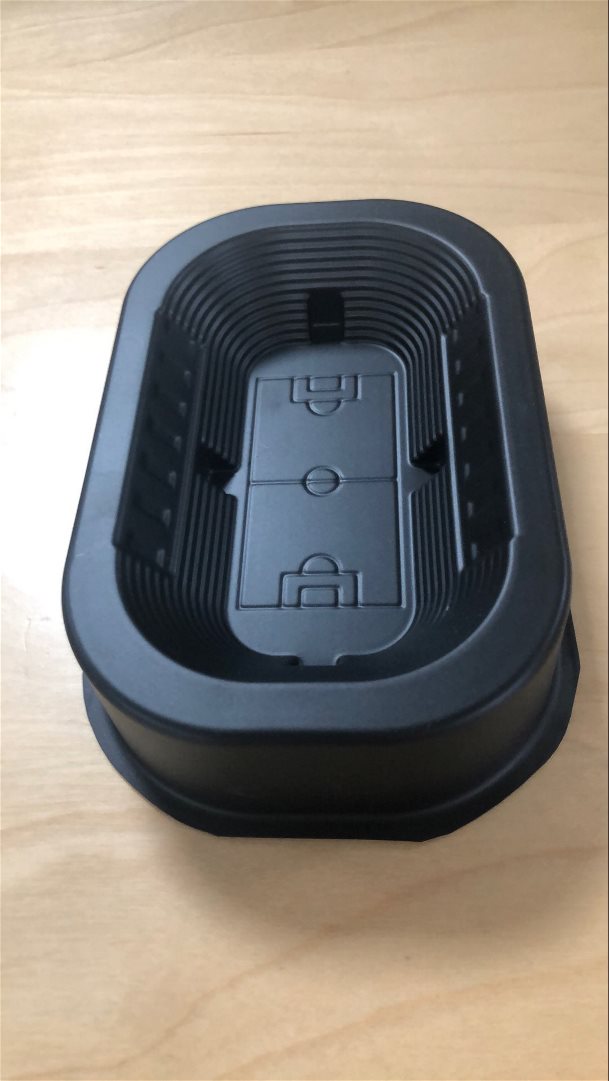 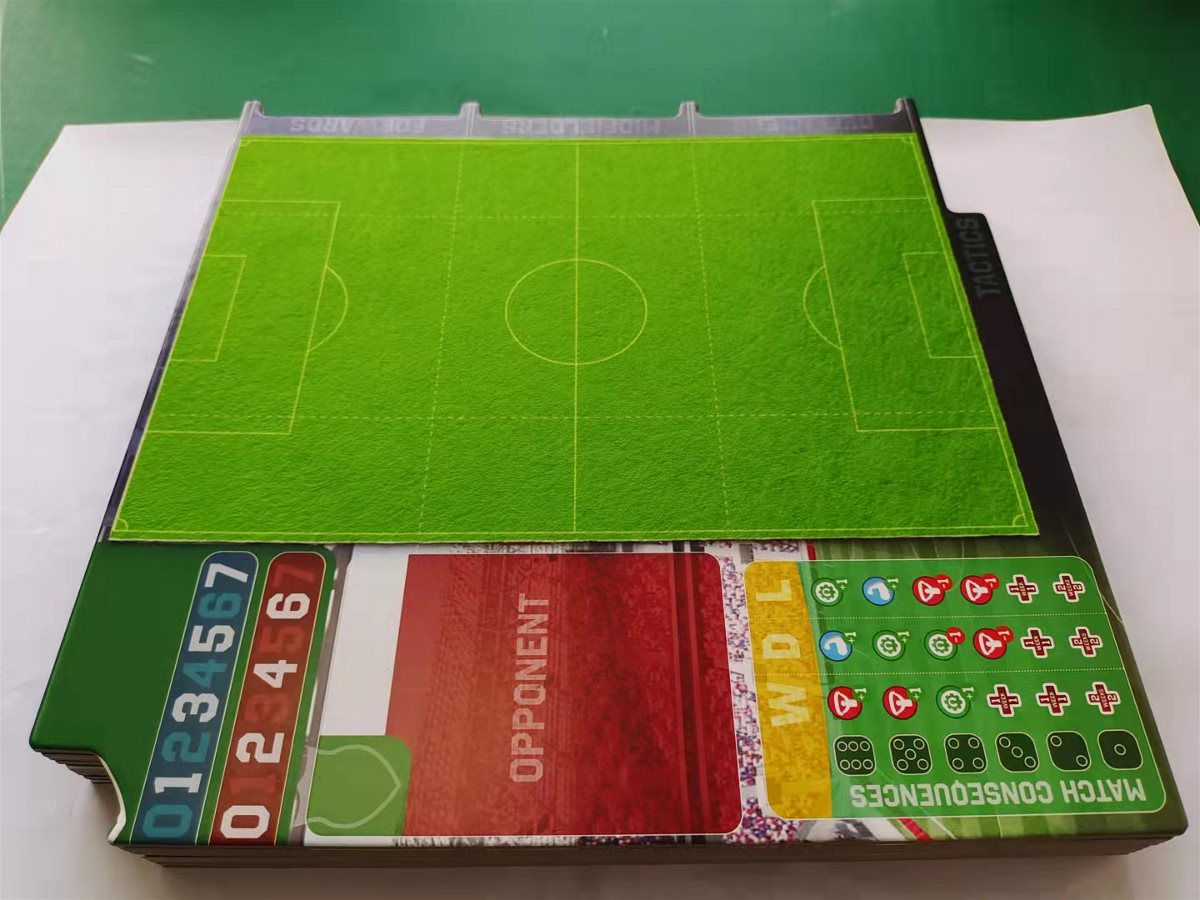 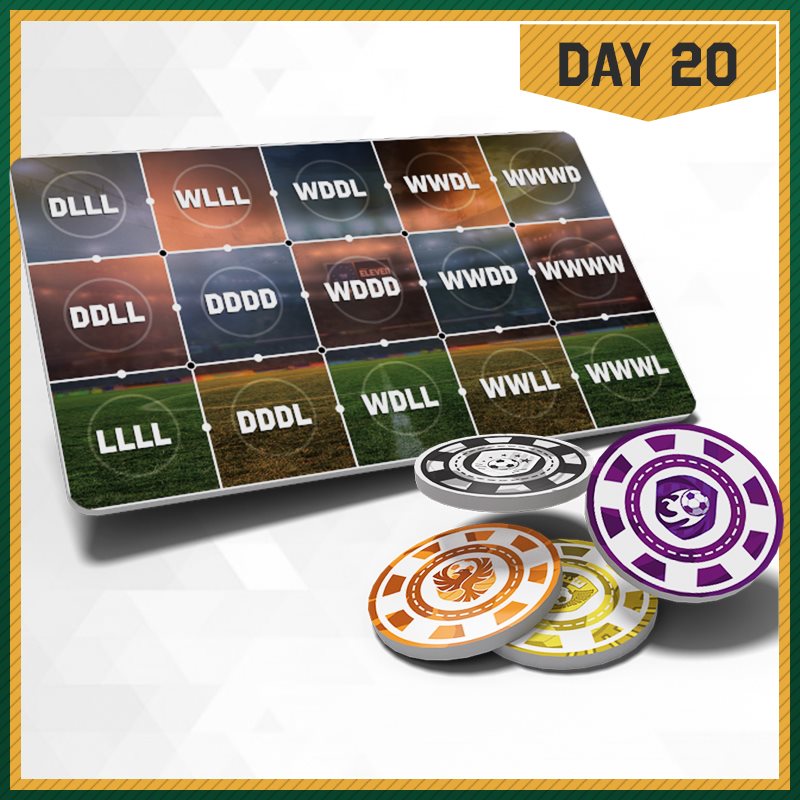 Yesterday’s Daily Unlock was a Betting board and 4 betting tokens!
Add more fun and interaction to the table with the Betting board. This new optional module allows you to bet on the results of the matches played by your opponents, and win or lose money depending on how well you do.
This gameplay bonus is a Gamefound Exclusive Stretch Goal for Eleven. It won’t be a part of the retail version of the game. All Stretch Goals will fit into the box. 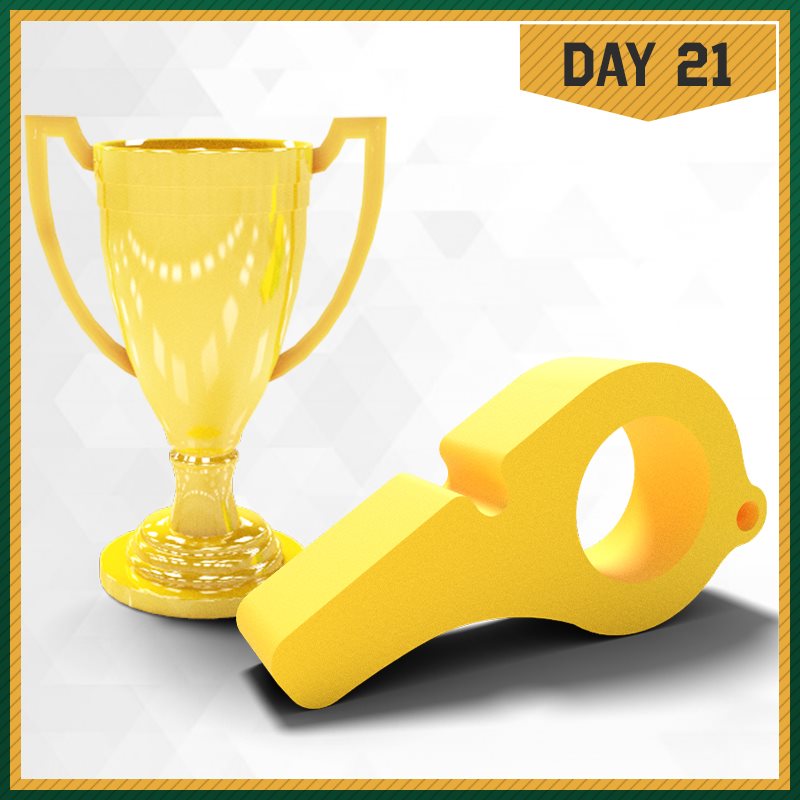 The final Daily Unlock in this campaign is a Wooden custom-shaped first player token and a plastic trophy for the winner of the game!
Make your gameplay special with a wooden custom first player token and add the honor of a unique trophy to give the winner when the game ends.
This component upgrade is a Gamefound Exclusive Stretch Goal for Eleven. It won’t be a part of the retail version of the game. All Stretch Goals will fit into the box.

Opponents
In Eleven we have 3 different types of opponent cards: divisions 1, 2 and 3. Division 3 has the weakest teams and division 1 has the strongest.
Within each division, there are stronger and weaker teams as well. I will get to that in a second.
In Club Stories there was a league table with the final results. All opponents were in it. You needed to gather a certain amount of league points to grab the title for example or avoid relegation. It was a clear system and it worked well. But we wanted the opponent clubs to become more alive, to be more a part of your story. 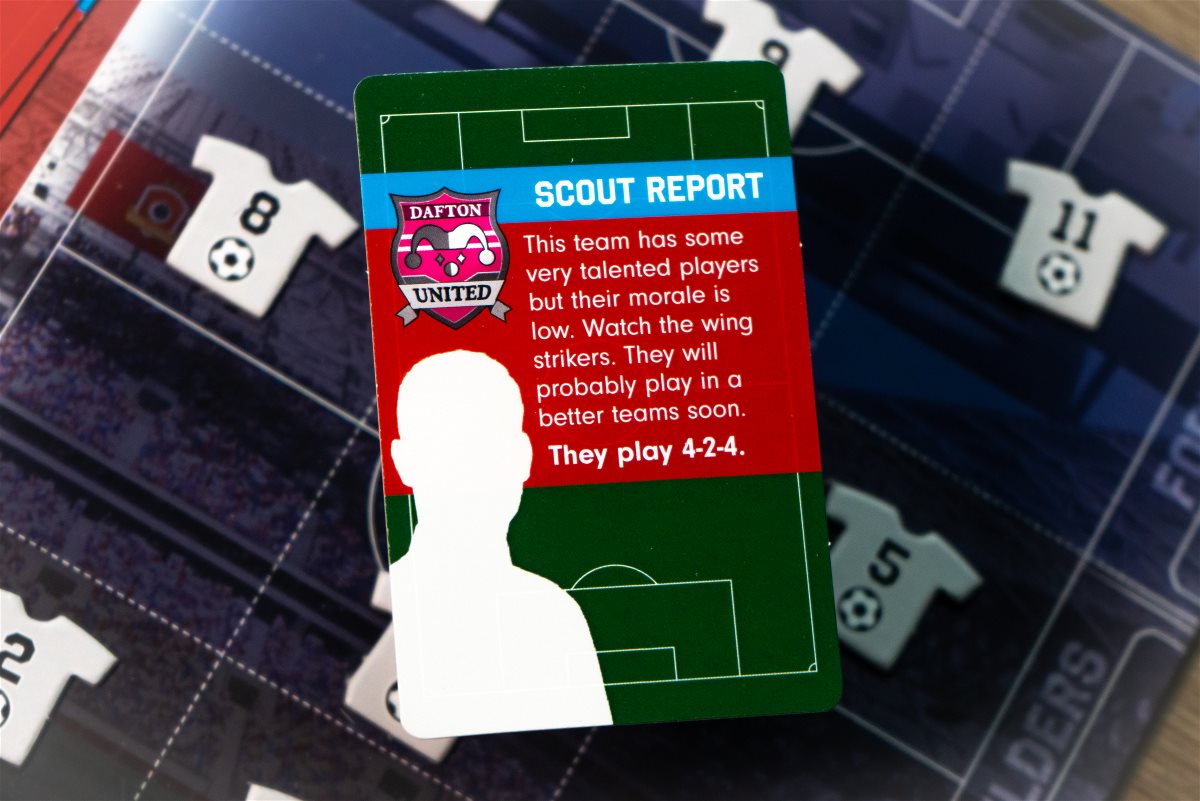 Of course, it’s not possible to play out every single opponent game, and a league of 20 clubs would be way too big for a board game. So we chose 8 opponent clubs. That would be 12 clubs when you play with 4 players. Just like the Scottish league.
After your match has been played, you move both your marker and opponent marker on the league board according to the points you acquired. After that, you roll a die for all other non-player opponents.
There are 3 types of dice. The red one is for the stronger teams in the league. Since I mentioned the Scottish league, let’s say that would be Rangers and Celtic. This die has lots of wins on it (3 points) and fewer draws (1 point) and losses (0 points). The average teams roll the blue die, which is more balanced, and the weaker teams roll the green die. You guessed it, it has the most losses in it. After rolling the dice for every individual opponent, you move the opponent marker on the league board. 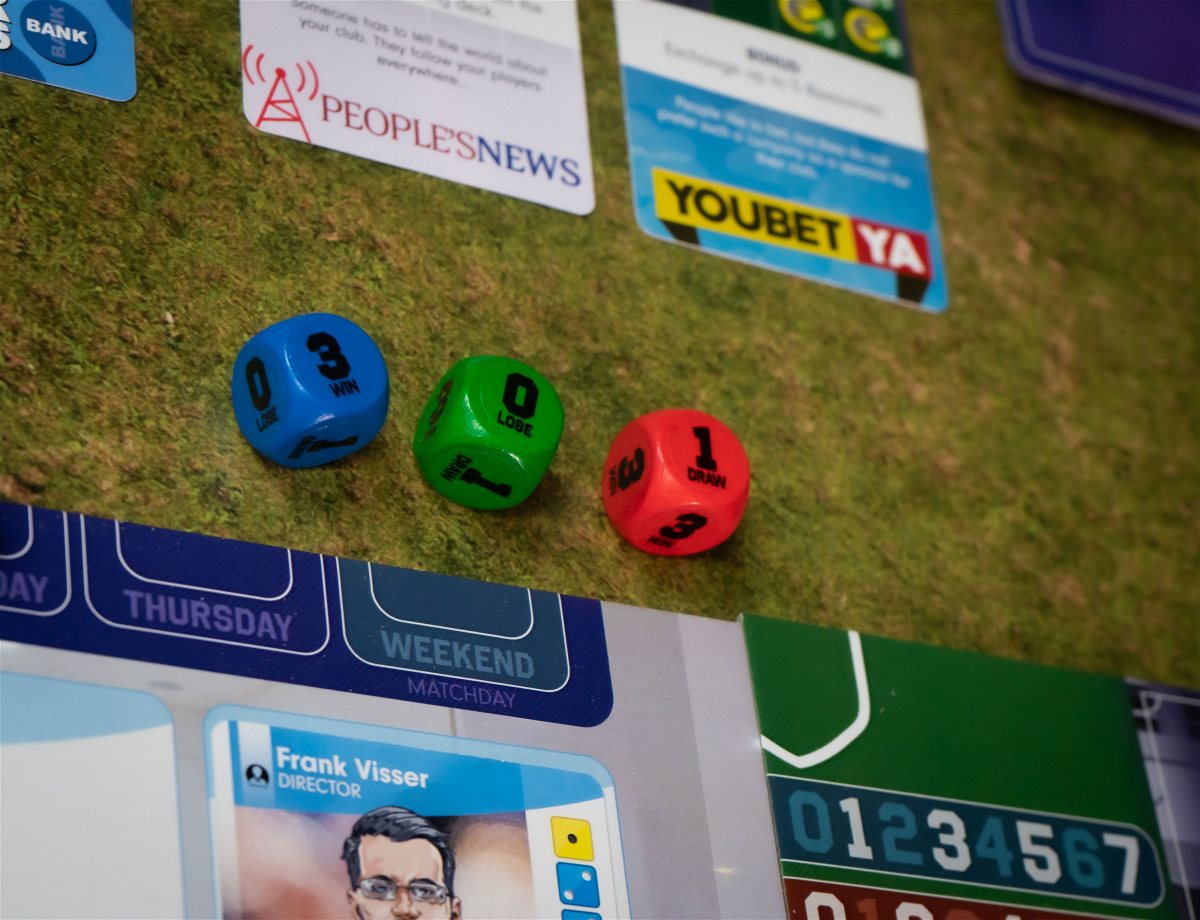 As you probably know by now, every opponent card has a scout report on it which gives you information about your opponent. The markers on the league board are colored according to the die that needs to be rolled, so you could also have a look at the color to see what you’re dealing with. There are more opponent cards from every club, so it is almost ipossible to remember.
I think this new system really adds to the experience. It’s a thematic improvement since Club Stories. It also brings more realistic randomness into the game. Usually, the better opponent teams come out on top during the season. But sometimes those smaller Leicester City-like teams may surprise you. I love it when this happens. It has nothing to do with strategy or victory points, but I enjoy those moments. Just because it is so close to reality and it is one of the things that makes football so great to follow.
Thank you for today,
see you tomorrow!
Ignacy and Thomas