Hello there,
The second day of the campaign it is, and the first wave of your feedback. Our team read all of your comments carefully, and we are already responding! Here is the brief info!

Gameplay All-In pledge
The most important change – after your feedback, we created the gameplay all-in pledge so you can order the game with all 5 expansions at a better price. I don’t want to go into details about the hell that is happening in the industry nowadays and how manufacturing and transport costs increased over the past year. I fully understand that you deserve the best price possible, and our production team’s role is to negotiate reasonable production costs.
We decided to bundle the base game and all expansions and cut some costs here. I hope you find this change a step in a good direction.
We have some other ideas, but it all depends on the growth of the campaign (a bigger print run allows us to renegotiate the price with the manufacturer). And your feedback matters (should we try to do them in smaller boxes? – there are various ideas to discuss).
The bottom line – we are aware that the increase of costs of production in China is a problem, and our goal is to make this problem as insignificant for you as possible.
Match against another player
The base game of Eleven doesn’t allow that. We were obviously play-testing different variants of this idea, and although many of them worked, it always makes the game longer and is significantly not fun in a 3 player variant, when two players are playing against each other and the 3rd player is waiting for their turn.
We have, however, later in this campaign a small surprise, so please, stay tuned and put trust in us!
Poland vs. England
Today Poland faces England in the World Cup Qualification, and some of you reach us and ask about the result. Poland has Robert Lewandowski, and I wish he scored a hat-trick today, but England has a brilliant team, and it really is hard to share some optimism.
Slavic slash pessimistic Ignacy predicts 1:3 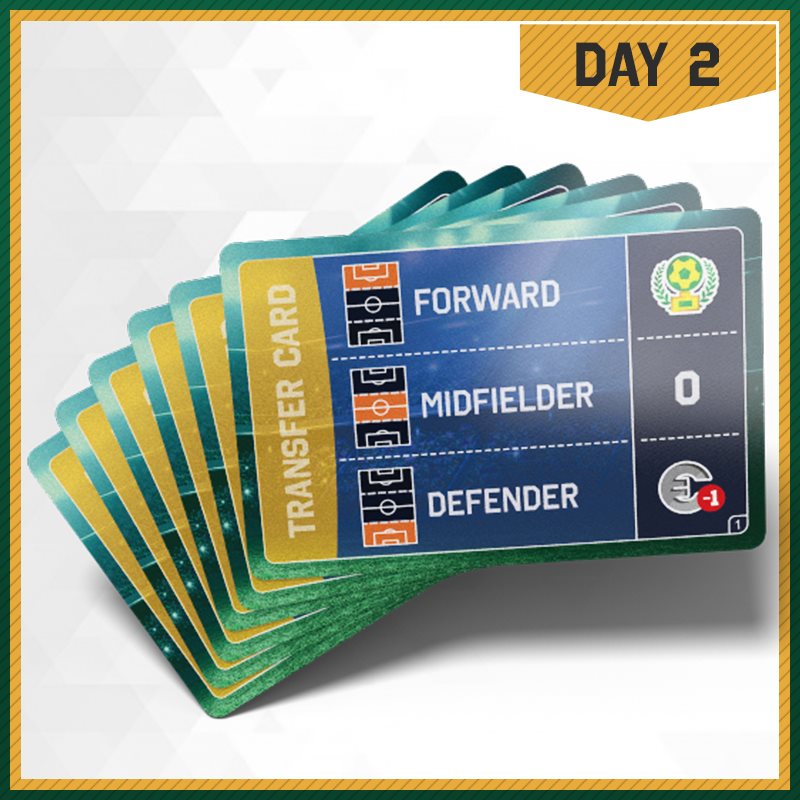 The Market mini-expansion adds 6 new Transfer cards. Each card shows the changing prices on the Transfer market for specific Player types. This introduces another tactical layer to the game that is especially important when you build your strategy around training Youngsters and selling them to bigger clubs. It also adds direct interaction, as one player may transfer his footballer and that trigers the change on the transfer market and a new cards is drawn. With this expansion, if your strategy involves training and then selling players (Borussia Dortmund, I am thinking about you!) – the interaction grows here in the mean way! 😉
This gameplay bonus is a Gamefound Exclusive Stretch Goal for Eleven. It won’t be a part of the retail version of the game. All Stretch Goals will fit into the box.

A week at the club
Monday
First thing in the morning, you get your resource tokens for the week. You check your 4 tracks and gain that amount. So, if your budget track is at 2, you gain 2 cash. If your morale track is at 4, you gain 4 morale. 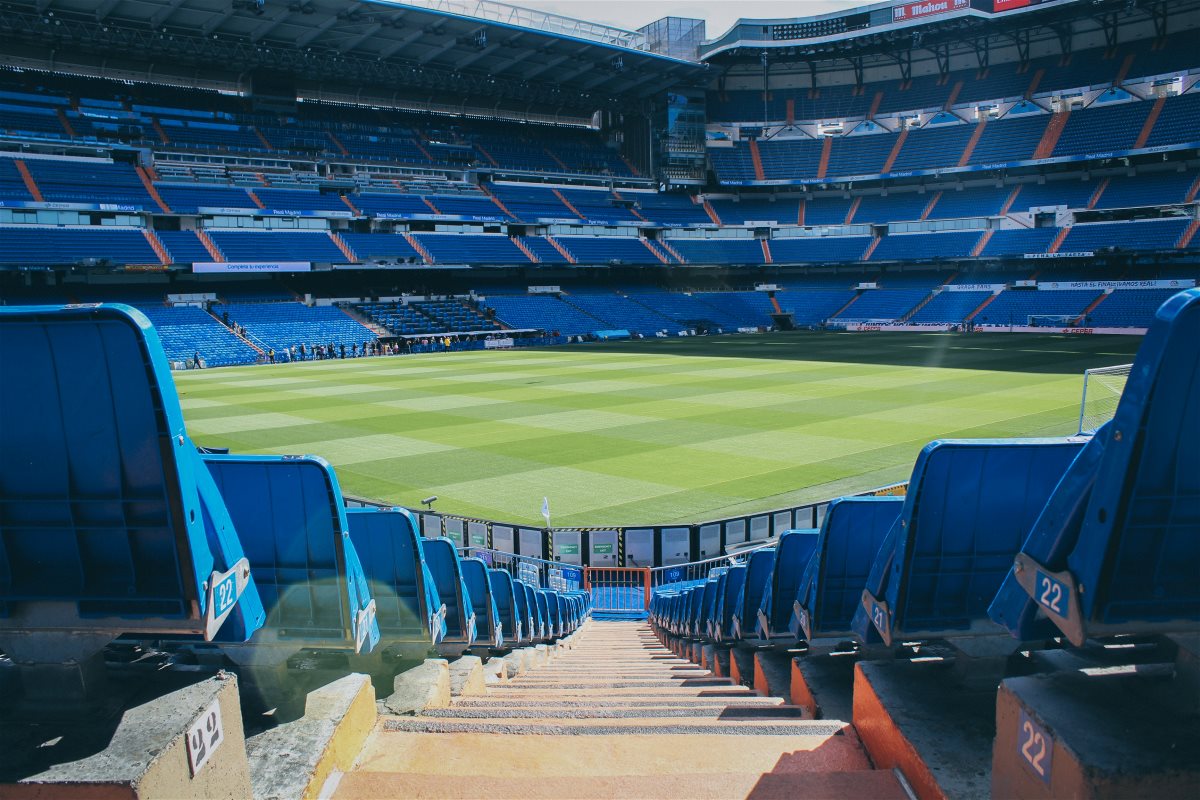 You can spend these tokens in different situations, later during the week. For example, use your fan tokens to fill up the stadium, or use your fitness tokens to make players perform special actions on the pitch.
Then, you head off to the board room for a board meeting. A club has 3 directors. They all have different opinions. For example, some see the club mainly as a business. Most of all, they want to make money. I won’t call out any real clubs here, but you probably know one or two which fit the description. Some directors think the club belongs to the fans, some will do anything to have the best team. Got one in mind? All these different opinions influence the decisions they take. So you should be careful which directors to put at those chairs.
Every player takes a board meeting card which will influence their own club. There always is a dilemma to be discussed with 3 different possible outcomes. For example: ‘Shall we raise ticket prices?’ You can imagine it brings in money, but won’t make you popular with the fans.
The board will decide. Not you. But you may want to join the discussion and try to influence them. We’ll get back to that later.
Tuesday, Wednesday, Thursday
From Tuesday to Thursday you may perform actions. You can hire players. They range in quality from 1 – 4. But beware. Some of them have special abilities which are just as powerful as a high-quality player. Besides, Players can be trained. You can contract a sponsor. They will bring you money and raise your stats on the 4 tracks. You can train tactics to make your team better. You can invest in infrastructure. You can hire staff. They give you many more possible actions. For example, If you have a first coach, you may train your players, which makes them better. At least, in most cases. Or a doctor to get rid of injuries. There is so much to do during the week. 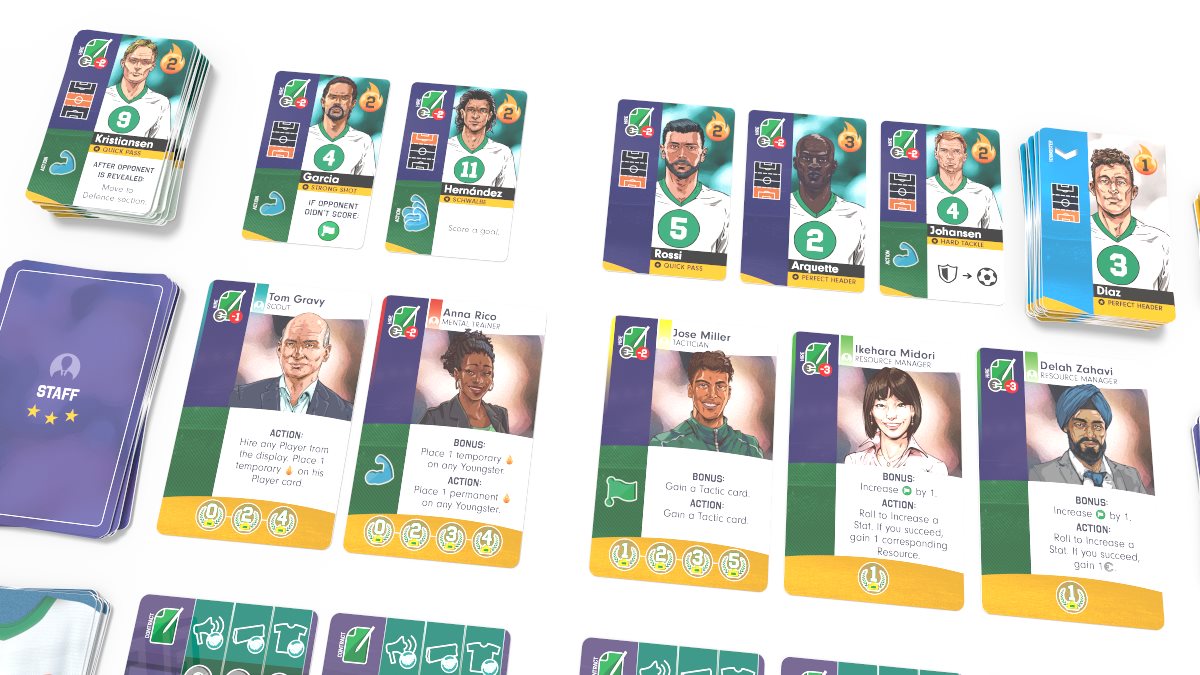 In the meantime, you check your objectives card again. They give you extra victory points. Or go for the perfect achievement for double the points. For example, you may have to win the match against your local rivals, because they beat you last season. Can’t happen again of course.
Weekend
You probably are used to a free weekend. Forget about that. As a manager, you are always on. You need to study your opponent. It can be very helpful. Learn their system, discover their qualities and weaknesses.

Then you select your players and choose tactics. All tokens are players with standard quality of 1. But you also have player cards. These represent the token with the same kit number.  They often are better and/or have special abilities. Then the match is resolved. If you have enough fitness resources, you may be able to select enough players and make use of player abilities as well. Don’t expect to win your first game. You’re just starting your career.
Now let’s see what the other players did. There are always 8 AI teams in the league too.
After you adjust the score track, you roll for the match consequences. Injuries may happen, fans may have had enough and leave, team morale may change, etc.
Now you may get some sleep. There is another board meeting tomorrow you may want to attend. Time flies.
Of course, there is so much more detail to it! We will discuss this in the upcoming updates.

Besides game designers and boardgamers, we are football fans too! To give you a little insight, we will tell you about our favourite teams with every new update.
Name: Ignacy Trzewiczek
Favourite club: Borussia Dortmund
League: Bundesliga, Germany
What I like most about Borussia: I became fan of the club recently, when Robert Lewandowski left Polish league and came to Borussia. Back then there were two other Polish players playing there – Kuba Błaszczykowski and Łukasz Piszczek. They all created Polish trio and did outstanding effort over the few years, with famous 4:0 against Real Madrit. Even though Lewandowski left the club, I reminded loyal to Borussia and I support them over the years. They have a great yuong team and one of the best European players – Marco Reus – inteligence, elegance, skill in one amazing package!