Hello, hello
This is Ignacy, this is another update in our campaign, and the poll results from yesterday really surprised me – Man United got the most votes in our season predictions. Very interesting!

We keep working with you!
Today we’re unlocking five new Director cards designed by fans. What Directors would YOU like to see in your game? Please give us your ideas in the comments below, and our Development team will choose the best 5 ideas.
News on the Goalie and development
There are many questions in the comments with you asking about the changes in the game, the progress, the situation of the game.
Our dev team and Thomas are working every day.
We receive feedback through TTS Google Form (and now we talk hundreds of forms submitted!), we receive feedback on BGG forums, we receive feedback here in the comments section.
Our dev team is reading that, debating, being in constant discussion with Thomas, designer of the game.
For instants, goalkeepers – adding the Goalie to the game has triggered a lot of constructive discussions in the comments section. As for now – but it may change!!! – goalies will be added to the standard gameplay. They will not be dependent on the dice results, but the player’s strategy instead. Goalie cards will be included in the Players’ decks and will have various abilities, costs, and artwork, similar to the Player cards in the game. Goalies, when efficiently used, will reduce the number of goals in the game.
Opponent cards with a non-distinguishable card front
Many fans have pointed out that having the Scout Report different on each of the Opponent cards for a team might result in more experienced players memorizing the back of the card and having a head start when planning their formations. Our development team has decided to make the Scout report on the front of the card the same for each of the 4 variants of the Opponent team. The back of the cards will be different on each of the 4 cards per Opponent team. This way you will never be sure how the Opponent will play during that particular match.
We are debating special Tactics cards for NPC teams as well, but it is too early to reveal details.
Young players
The front of the Young player card will not have the name of the player, only the position, so you cannot remember what player it is.
The bottom line here:
Keep the feedback flow. We are doing together the best football manager game out there! 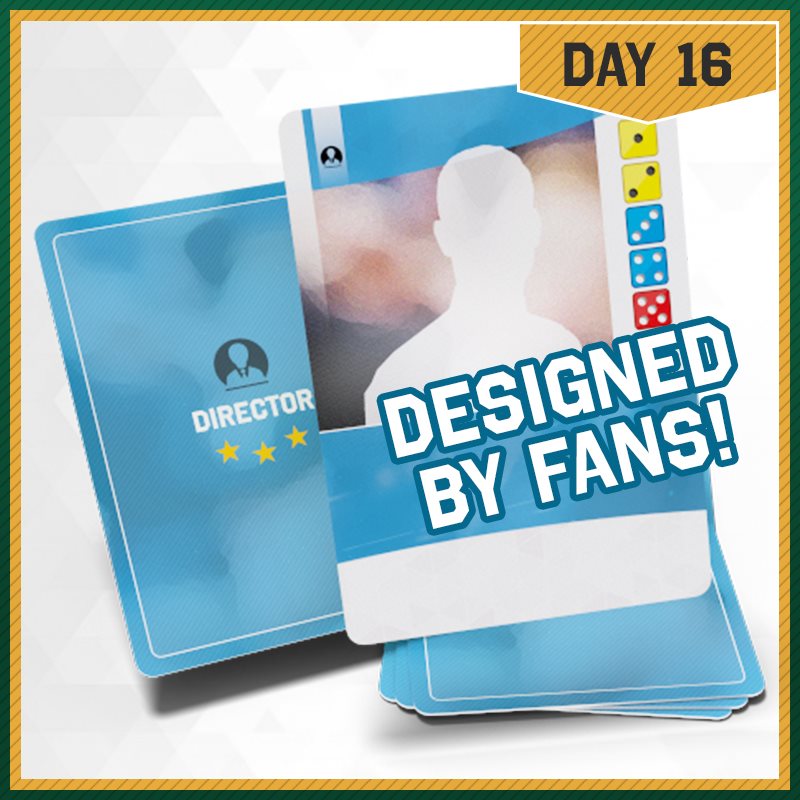 Today’s Daily Unlock is 5 new Director cards designed by fans!
Increase the variability of your games with 5 additional cards introducing Directors suggested by the fans during the campaign. This means more fun and more strategic paths to explore. Make your club different each time you play!
This gameplay bonus is a Gamefound Exclusive Stretch Goal for Eleven. It won’t be a part of the retail version of the game. All Stretch Goals will fit into the box.

International Players expansion
Ok, you have built yourself a nice club. You have an impressive stadium. Football fans across the country and all other clubs respect you as one of the big clubs. Now, it’s time to look abroad for some great international players. They’ve heard about you and want to join your team.

Of course, running a football club is not only about having great players. There is so much more to it. You probably learned that by now. It is very important to have a great staff. And the scout is one of those important people you can’t miss.
This expansion zooms into the work of the scout. You get to do some scouting yourself. You travel the world to look for great players.
The international player cards are divided into 5 decks. One for each continent. To travel from one continent to another, you need flight tokens. You can buy them by spending money or operational tokens. The bigger the distance, the more flight tokens you need to move your scout marker across the world. At the end of the game, you get bonus points for having players from all of the continents.
Every round all international player decks that aren’t occupied by a scout marker get refreshed. So, enough reason to visit another continent before your rivals do.

It is a very thematic expansion that simulates the world of scouting. It also adds another dimension to your chosen strategy, but that’s something you have to find out for yourself.
Of course, you can use this expansion with any other expansion. You can also mix in the players from the base game for even bigger decks.
Time to go international!