Batman: Everybody Lies consists of a series of stories that create a unique campaign. It’s a mystery that takes place in Gotham, and players investigate it over the course of a few game nights.

In this game, each player takes the role of an iconic character that lives in Gotham. Two of these characters are Catwoman and Vicky Vale. The first one is a famous thief, a controversial ally of Batman, and a complex character that walks the line between hero and villain. Her special ability in the game is that she has access to both the Batcave and Arkham Asylum. She is the one character who can reach Batman or Alfred if players need to. 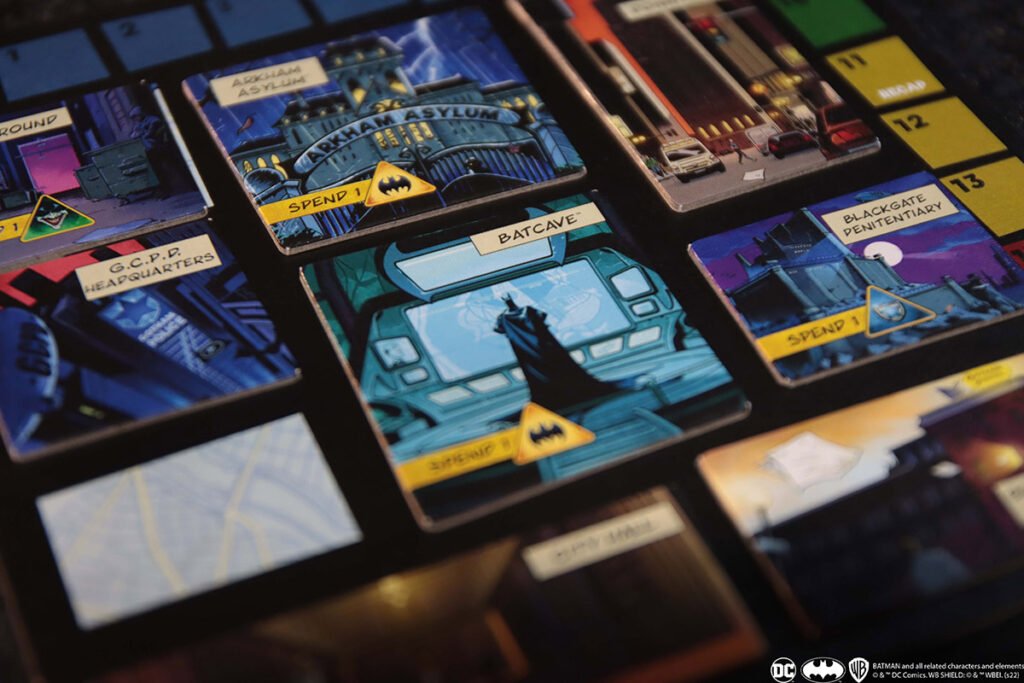 Vicky Vale is a passionate journalist who works for the Gotham City Gazette. She is a strong woman who fights for the people of Gotham. She exposes politicians’ schemes and fears no one; not Gotham councilmen, not the wealthy elite, nor even the dangerous mobsters. She is respected by the common people of the city and she might be one of the last hopes of Gotham. Being a reckless journalist, Vicky has the in-game ability to refresh all Locations and make them available for players to visit again.

Now, let’s introduce you to the other two playable characters: Warren Spacey and Harvey Bullock. The first one is an investigative reporter working for the Gotham City Gazette. He is known as the first reporter to write an in-depth article about the Joker. Having lived in Gotham for decades, Spacey has survived countless attacks by supervillains and today, though a man with many enemies, he refuses to put down his pen no matter which criminal attempts to intimidate him. With his enormous experience and a network spreading over the entire city, Spacey’s ability allows players to reach and investigate the criminal Underground of Gotham City.

The last available character is Harvey Bullock —a detective of the Gotham City Police Department. He is known for his hard-shell style of work. Criminals have little hope when Bullock is involved. Receiving as much praise as reprimands for his sometimes brutal methods of work, he is one of Jim Gordon’s most trusted allies and friends. Though not the most righteous member of the Gotham City Police Department, he may be the most stubborn and reckless. His ability in the game allows him to access the criminals at Blackgate Penitentiary. 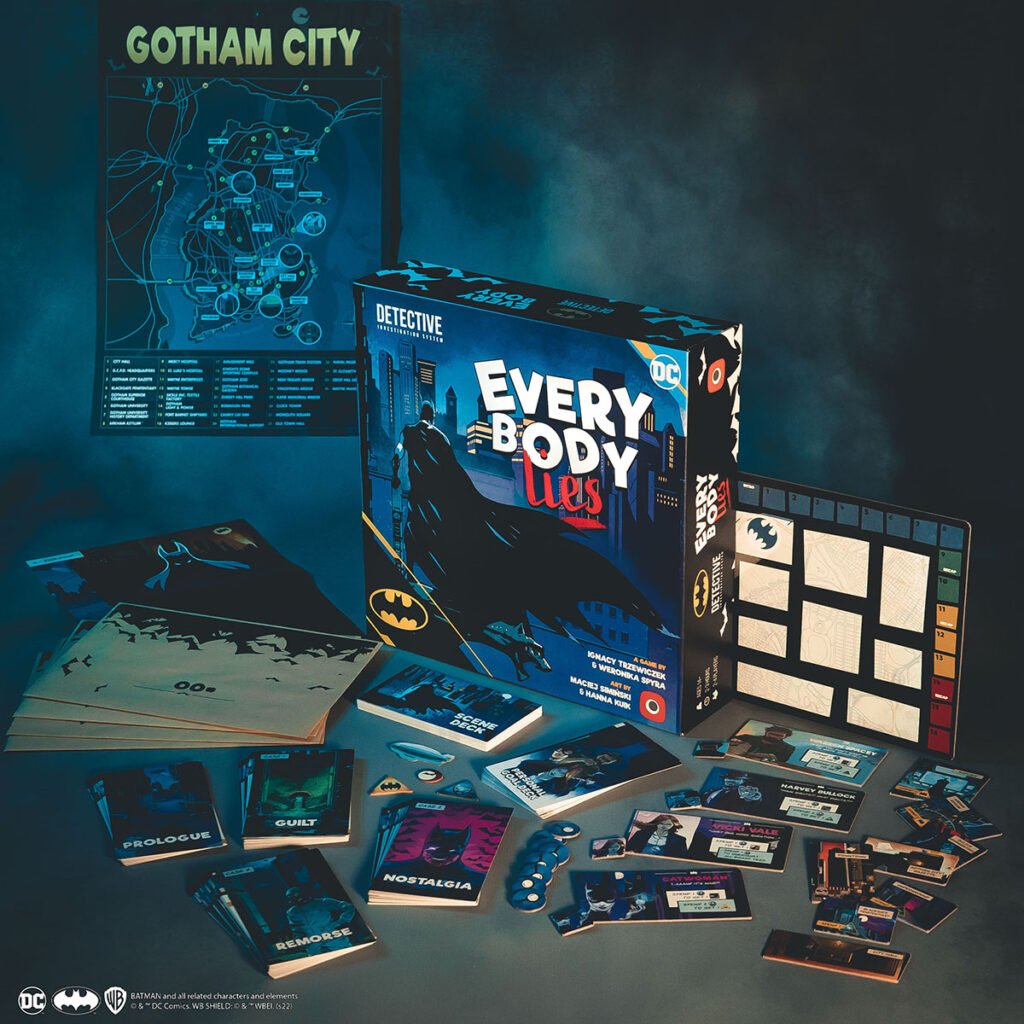 Batman: Everybody Lies takes place in Gotham City just a few months before Jim Gordon becomes commissioner. The streets are overflowing with crime and the city is drowning in lies, bribes and injustice. Players will visit some of the most iconic places in the city to investigate the cases. The game board comes with 8 unique Locations. Four of them are the main Locations: The Gotham City Police Department, City Hall, Gotham City Gazette and Downtown.

At the Gotham City Police Department you can question suspects, browse through evidence found at the crime scene, or talk to police officers. In the City Hall, players gain access to the city’s archives and official materials from old investigations. This is also the place where you might have a chance to interact with some of the members of the city council. The Gotham City Gazette is the place where Vicki Vale and Warren Spacey work. It’s also where intense investigative journalism takes place and where you can browse the Gotham City Gazette’s archives. Downtown represents the city itself; all the pubs, restaurants, little corner stores and forgotten parking lots.

In the game, you can also gain access to four special Locations. These are the Underground, Blackgate Penitentiary, Arkham Asylum and the Batcave. The first represents the criminal underworld. It is Warren Spacey who can facilitate access here, with his long history in the city and vast networking, he is able to reach out to gang members and mobsters without risking his life. With him, you are safe in the Underground. 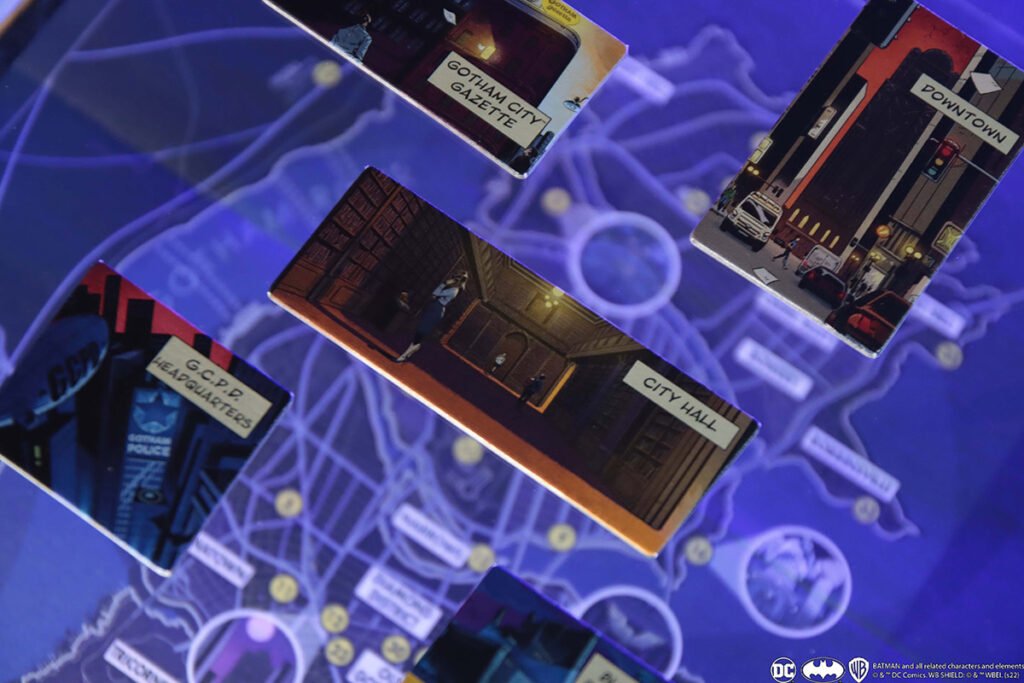 Blackgate Penitentiary allows players to talk to convicted criminals. There you can find regular, low-level wrongdoers, or even supervillains who ended up behind bars. Harvey Bullock, who has access to this place, can enter the prison and question its inhabitants.

Arkham Asylum is a hell, crowded with infamous patients who should never again walk the streets of Gotham City. Access here can be gained through the master thief—Catwoman. With her, you can sneak into the Asylum and talk to those kept there. She is also the only one with access to the Batcave—though not always welcome—and she can ask Alfred or Batman for help. The high-tech devices and software provided by Batman may be a game-changer in some cases.

Playing Batman: Everybody Lies is a unique story-driven experience allowing players to visit fan-favorite places and interact with them in the pursuit of answers and evidence.

Gotham is a city of mistrust. Inhabited by lies and corruption. The only place in the world that doesn’t wake up innocent and bright in the morning. No rain can wash off all the sins rooted in these streets. Even its heroes are tainted. Designing Batman: Everybody Lies, we knew we must represent this dark, noir theme. That’s how Personal Goals came into the rules. It’s a cooperative game in which all characters work together to solve mysteries and use their skills, knowledge, contacts and wits to achieve the common goal. 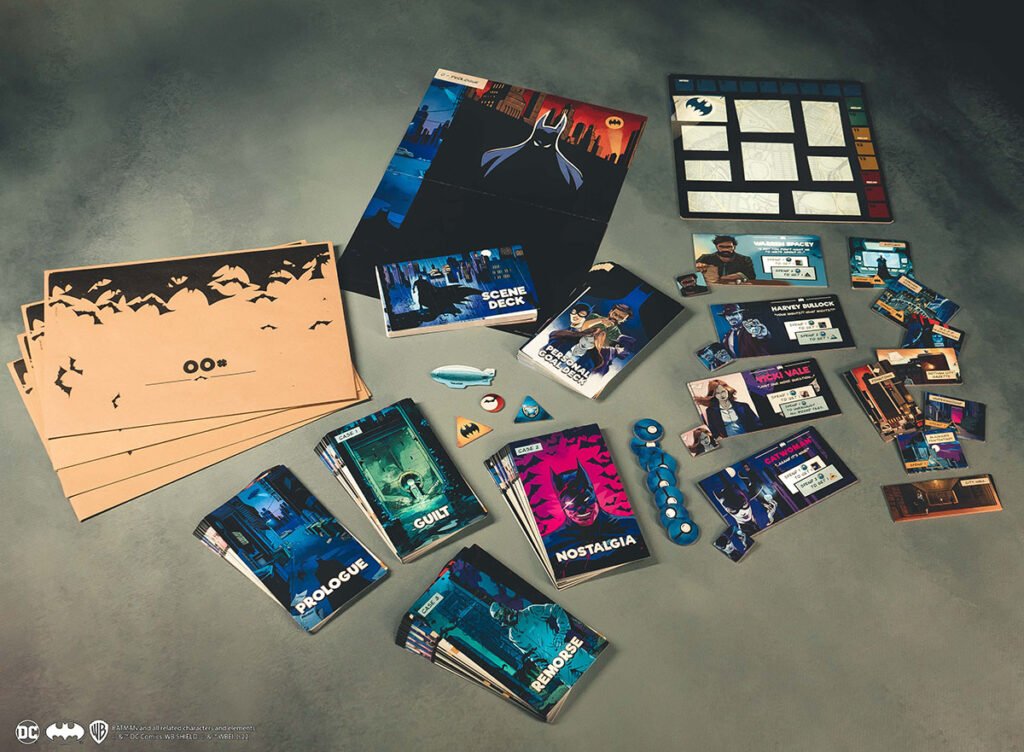 Each Case in Batman: Everybody Lies starts with an Introduction that describes the Episode’s goals and the current situation in the city. In addition to that common Introduction, there is also an additional private Introduction for each character, with their own information, their own point of view on the Episode, and their own goals to achieve. Later in the game, as the Episode progresses and players discover more and more Lead cards, they may stumble upon the unusual instruction, something like: Spend a Catwoman token to Read card C.

If one of the players is playing Catwoman, they may spend their token and gain access to this mysterious card C. They may then read the card in silence, only for themselves—they’ve just learned something, discovered something, and pushed their personal goal forward. There are 26 Personal Goal cards in the game. 26 moments when one of the players at the table does something in secrecy. Gotham is a city of mistrust. Inhabited by lies and corruption. Will you fight to unveil its sins?