So Master Set, huh? Let’s talk about building this baby!

The New Era had 110 cards including Location cards and Connection cards. No Leaders though. Some of these cards were exact reprints of cards from 51st State.

Are you following me? You don’t look like you do. Anyway, that was a starting point. 272 cards. Big freaking mess. So I took a huge two handed hammer and I put it into work. Big hammer. Work. You got picture? 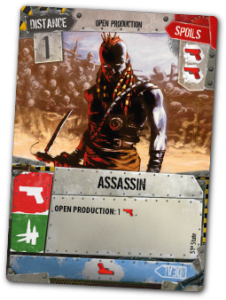 First I rebuilt base 51st State. I removed Leaders. I removed Connection cards. I left in the deck only Locations. I looked at them very carefully, card after card, with my whole experience I gained for the past 5 years and with my hammer in hand. And I began to use it. I removed few cards. I added few other. I changed some values. I added mechanisms known from Imperial Settlers that says that each Action card can be used only once per round. I balanced the shit out of it.

After few weeks I had a clean and perfectly constructed set of exactly 88 Location cards. The basic set of 51st State. The basic engine of the game. It worked smooth and fast. Most of the cards were Production and Action cards – Production provided players with Resources. Actions let them change these Resources into Victory Points. Easy peasy, exactly like old good 51st State back then in 2010.

Now the harder part. Expansions. There is going to be lots of hammering here. 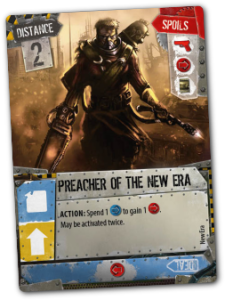 I removed from The New Era all cards that were already in the base set. We didn’t need clones thrown all over the place. Then I removed Connection cards. Bum, bum, I was just destroying one card after another and it was very good feeling. This hammer thing? Better than any meditation you could have.

Many Razing cards. Many Feature cards. Many cards that are somehow dedicated to attacking opponents. It’s The New Era! It’s Hammer Age.

And then a ton of play testing. Balancing the set, tweaking with cards, changing values, using hammer here and there, changing Distances, playing it over and over again.

Finally I thought I am done. I was staying here covered with dust, with hammer with my hand and smile on my face.

I clone some cards from base set into The New Era to keep crucial things in right proportion in a deck that has now 88 + 50 cards.

Play test shit out of it again. It works. Who’s your daddy now? 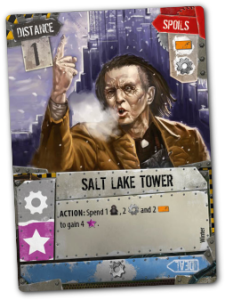 Second expansion. I am getting tired but my hammer gives me strength. I remove from Winter few things like Leaders and Connection cards. I carefully look at the set. Then I remove few more cards just because I really like my hammer. I add few new cards. I make it all about big production. Big fat Production cards and big fat Action cards that let you change everything into big fat points. Big Fat Points. Sounds awesome, right?

So who’s your daddy again?

51st State: Master set is a final relaunch of a game I designed in 2010 and was working on for next few years. It’s perfectly balanced basic set that is easily combined with expansions. Whatever you pick The New Era or Winter or upcoming future expansions you will get your beloved old game with slightly different feeling and abilities of cards. You better grab your copy before it’s too late..

Just short information. We have open pre-orders for the game. And I have my hammer with me. So you better go to pre-order page and give us your money or I’ll put my hammer last mre time. Did I mention it is huge, two handed and is really heavy?

You can preorder new set here and get your own copy weeks before street date! And what is more, your copy will include ton of amazing shit that is produced only for our hardcore fans! Please, check our pre-order page and make decision!