Welcome to part 5 of our design journal series for Cry Havoc. Today we return to Michal Walczak, the lead developer for Portal Games on Cry Havoc.

And one day, early in the morning, Michał Oracz came and blew everything to hell and back.

Michał arrived at the company before me, he was already sitting behind my desk, over my game, throwing its elements out—one by one, indiscriminately.

“Listen, I’ve simplified this … I got rid of that … This made no sense … That was piss poor…”

Michał Oracz—the hurricane Katrina of Portal Games. He definitely could do something I wasn’t able to when I started to work on this project. And he had one indisputable advantage over me.

(Apart from his experience, that is.)

(And apart from his knowledge.)

(And his good sense.)

So, Moracz could take a fresh look at things. Why was he throwing them out? Because he revised many of my ideas that I was no longer able to. What was he throwing out? Everything that worked, but was not awesome enough. Was he merely throwing out? No. He was substituting. There was a replacement for every ditched element of the game.

The results of a year’s worth of work were lobbed into the dustbin. That hurt me like hell. At the end of all this, I gave a rueful look inside the box to see what was left. As it turned out, aside from the shreds of my work, one could still see a complete right atrium with the AV node, valves, and all the rest of the neighboring slimy mess.

Moracz did what he should have done. He made the game better. And it was no longer Grant’s and mine project. It was Grant’s, mine and Moracz’s.

Moracz taught me a couple of important things over those few months. For example, you should make the components as ugly as you can, literally scribble them on a piece of cardboard paper. Nothing more. You cannot regret throwing them away. You’ll knock yourself out over a component, you’ll do a drawing, a nice-looking frame (heaven forbid!), you’ll write something in a neat script, and become attached to the idea that does not necessarily work. It can’t be that way. If you need to show someone the prototype, you tart it up from top to bottom. But if you don’t need to—you can use even a toilet roll tube. No man has ever attached himself to a toilet roll tube.

Within a few months, we have tested many variants of different mechanics. We considered changing the worker placement mechanism: We could introduce global changes or tweak some (it would appear) more subtle changes, for example, when your army enters a region should they block the opponent’s troops?

We discussed every important element of game designing: king making, downtime, replay value. Moracz ensured that we kept a good working pace. Every week we would meet to test and draw conclusions. Then, we would improve the prototype on the basis of what we had concluded.

Brilliant ideas emerged in huge numbers. The best thing about working with him was that Moracz’s skills complemented well with mine. We could hurl a cannonade of ideas at each other, instantly picking up those that seemed the best.

And what were our best ideas? 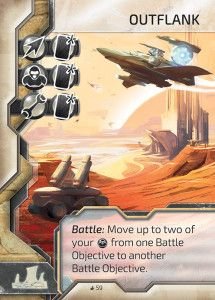 We brought deck-building to the game. Since then, the board has been divided into various terrain types. As we walk around the map, the deck-building mechanism allows us to change our faction abilities so that it adapts to fighting in forests, mountains, or swamps. It’s simple: You specialize in battles fought on a particular terrain.

We integrated the point track with the round track—the number of rounds till the end of the game is indicated on the same track where you score your victory points. If you get a lot of VPs quickly, the point marker will cancel some of the rounds and shorten the game! This way the game becomes sensitive to the differences in players’ skills, lengthening the most fierce gameplays.

The battle board. I’ve already mentioned it, haven’t I? Ignacy’s diamond. It was the only thing we weren’t supposed to change.

Oh well, but we did.

Until then, we deployed our troops in the field (on a given terrain type) and/or put them in the reserves. Then, the armies would clash with each other, one by one. Using some tactics, you could move your troops around while in the heat of a battle. It worked great.

But you can always fashion a diamond into something more brilliant.

There were three of us at the table: Moracz, Multidej, and me. We were simply testing the game’s 3-player variant. At some point it occurred to us that we could improve the battling mechanism because the sheer military strength still had too much impact on the outcome of a battle. Do you have more troops than your opponent? Fight. You have less? Flee. Where is finesse in this? Where is guerrilla warfare? Where are the stories of lands won with blood, armies artfully plotted against, companies miraculously rescued, and fierce suicidal raids?

There were three of us sitting at the table, and there were three of us who created a slightly different battle board. Now each space represented a specific battle objective. You can fight in order to kill off the enemy, to encircle his troops and take them captive, to plunder the area, or just to seize the fortifications and drive your flag into the ground. These are all entirely different things. Two factions can start a battle. Both can win and both can lose, depending on how they pursue their objectives.

Believe it or not, but we invented this together. I couldn’t tell who was the one to express this idea in words. I couldn’t point to a single author. We were just working together towards a common goal. As a result, this battle board is a child of three fathers and Grant as a grandfather who invented this diamond, and gave us foundation to turn it into brilliance. None of us tried to take the sole credit, no one tried to falsely attribute the authorship to someone else. It was a synergy effect. In the four years I spent working with Portal Games, that was the best moment I have ever experienced.

I rose from the table and I didn’t even have to look inside the box to know what was in there. Everything was now complete. Moracz and I handed the project over to Ignacy. The release date is scheduled for August 2016. So is it over?