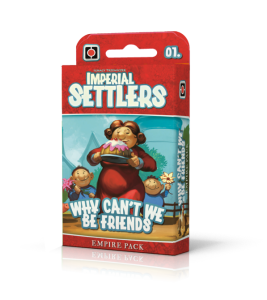 Why Can’t We Be Friends is the first Empire Pack for Imperial Settlers. It adds an exciting new element to the game… Open Production… which adds more player interaction. We aren’t here to talk about that though. I’ll let you discover that on your own. Today, we are going to discuss the other new feature that this expansion introduced: Deck Building.
There are two ways you can introduce the awesomeness of Why Can’t We Be Friends into your games.

OPTION 1: You can just shuffle it all together. It works that way. Some people might even prefer it that way.

OPTION 2: You can customize your faction deck for more strategic options!

Deck Build With the Barbarians 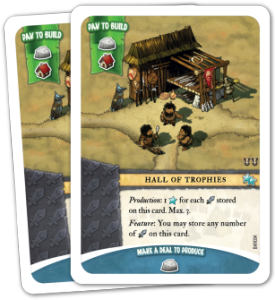 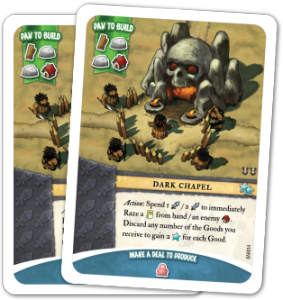 Why would we remove Dark Chapel? Well, look at the card we just put in. Hall of Trophies allows us to store Raze tokens to gain Victory Points during the Production phase. This card requires us to be a bit more passive in our play style because we will be using our extra Raze tokens for something other than crushing our opponent’s Common buildings. Also, both cards are the same color (Black) so we won’t be messing with the distribution of the deck which can sometimes be important! 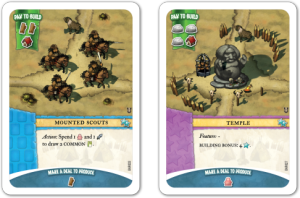 While we are at it, let’s also put Mounted Scouts in our deck and remove the Temple. This gives us another non-aggressive option for our Raze tokens by allowing us to draw Common cards, which we can then Raze from our hand for more resources! Removing the Temple is somewhat obvious because it doesn’t add to any strategy and is fairly resource heavy to build. 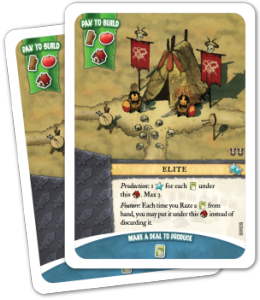 Look at Elite while you are thinking about this strategy. We’ve already decided that we will be playing a bit more passive this game… which means that our Raze tokens will most likely be used to Raze cards from our hand. Why not try to gain some extra points for our efforts? What will you remove to put this card in?

Maybe Rabble? If you are going to be Razing your Common buildings from your hand, chances are you won’t often have many buildings in play to Raze.
How about Village? It doesn’t have anything to do with Razing. Word of advice: NEVER EVER EVER remove Village from your Barbarian deck. EVER. Forget that we ever had that notion.