It’s true, there are many similarities between Imperial Settlers and 51st State. Imperial Settlers was designed as a light-hearted update to the award winning 51st. This year, 51st State is getting a new skin and boy has the reaction been interesting. For us, it’s awesome that fans of the game are so passionate about changes to their beloved game.

To set the record straight, the 51st State Master Set is NOT a re-theme of Imperial Settlers. It is very different and I’ll explain why.

51st State is a race. You only have as much time as your opponents give you. Instead of 5 rounds, the end game is triggered when one player reaches 25 points. You are under pressure from the very first turn and have no way of knowing how long your precious engine will last.

In Imperial Settlers, players have their own unique deck of cards that drive their particular strategy. The Romans enjoy building, the Barbarians like to raze, etc. When the game starts, you already know the basic strategy of your faction and have an idea of how to build that out.

There are no faction decks in 51st State. There is a single common deck of cards that all players build from. You get your first hand of cards and you have to deal with it. This is the start of your strategy. You can’t rely on getting tons of gold like the Egyptians. You get what you start with, what you draft, and from this you have to figure out your engine. There is no pre-constructed strategy. You have to gather random crap from the wreckage of a post-war America and build some sort of existence. Good luck with that.

Remember those factions in Imperial Settlers? You can rely on them. They are safe from destruction from the other players.

This is not the case in 51st State. This is a post-war apocalypse… nothing is safe. Your opponents want everything you have and they will tear you down. That precious engine you pieced together out of scraps will be destroyed. You cannot count on it. You don’t have 5 rounds of planning. This is a race and it is built on destruction.

In Imperial Settlers, each deal costs 1 Food. Razing costs a sword. Building costs Stone or Wood. It’s simple. With one Sword, you can Raze any location in your hand.

In 51st State, locations have a Distance. Some places are close to you, and you might only spend 1 Raze or Deal token. Some are much farther away and will cost you 3 tokens. You need to plan ahead and save up your tokens in order to be able to interact with them. They are more powerful, but will cost you valuable time to reach. Is patience a viable strategy in a race? You’ll have to figure that out for yourself.

In Imperial Settlers, common cards can be built or razed. You can make a deal or build a faction card. These two, different options, give you an easy way to distinguish between the two types of card.

In 51st State, each card represents locations in your area, and all of them can be either built, razed, or dealt with. You have many more choices in your hand… your options are more flexible. You have access to many more resources, but you must figure out how to achieve them: build, deal, or raze? 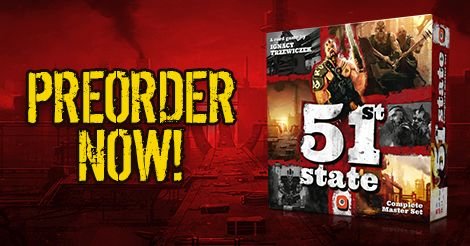 Pre-order now to receive all the upgrades including a short story set in the Neuroshima Hex universe, better components, and 2 more factions!