The world of 51st State is in ruins. It’s up to you to rebuild. Take charge of a group of survivors and fight your way to salvation. You must rebuild. You must overcome. Beware everyone else… they are trying to do the same.

The 51st State Master Set comes with 4 factions for players to take control of. Each offers a unique set of resources as well as some small special abilities. New York, Mutans, Appalacians, and Merchants. You may find that you prefer one… so I’ll try to introduce you to a few.

The Patriots of a once-strong nation. New York is the last bastion of man. A walled city of hope and desperation. New Yorkers want to rebuild… the city… the state… the nation. As far as we know, they are humanities greatest hope. They have forged great factories to smelt new iron from the ruins of a collapsed city. They build, defend, and hope.

New York produces Iron, the major resource of building. From the very first turn, New York can build 2 new Locations at Distance 1 or one Location a little farther away (Distance 2). They struggle to Raze and Deal, however. They aren’t immediately able to Deal and Raze locations at Distance 3. It’ll take a bit more effort to reach these powerful locations.

Remember the dawn of the industrial revolution when unions formed to fight back against oppressive company bosses? Yeah, neither do we… but apparently that happened in Appalachia and it’s not much different post-war. A loose alliance has formed between these old manufacturing companies and miners. The Appalachians took a hit from the war, for sure, but being so sparsely inhabited, means that little was leveled in absolute ruin.

The Federation takes advantage of nearly complete infrastructure to build their new nation. They can Deal and Raze a bit, but they are strongest at rebuilding. They begin the game with Bricks which gives them a powerful start. By discarding a card, they are the only faction that can build a Distance 3 location on the first turn. This is a strong advantage, but discarding that card is going to be a pain come next turn. 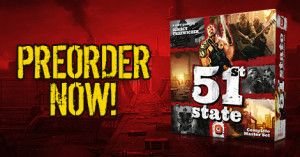 We invite you to check out the pre-order campaign page. You can still get in on all the goodies! You’ll receive the base game, along with a few extras that are only for pre-orders: Two additional factions, custom deluxe tokens, a 70 page story in the world of Neuroshima, and much more!