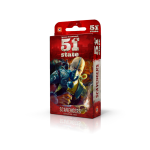 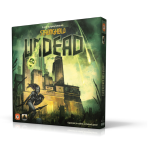 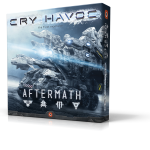 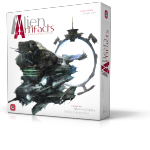 Gliwice, Poland – October 12, 2016. Today, Portal Games announced four new titles for their 2017 lineup. Three are expansions for existing product lines and an all new sci-fi themed card game. Expanding on their major successes of 2016, 51st State: Ruins and Cry Havoc: Aftermath introduce all new strategies into their product lines. Stronghold: Undead has been completely rebalanced and updated over the past year to fit with the second edition of the base game. Alien Artifacts is another highly-strategic card game in the Portal line, set in the deepest reaches of space. With the release of First Martians in the first quarter, 2017 is looking to be one of the biggest years yet for Portal Games.

Alien Artifacts is an 4x style card game designed by Marcin Ropka and Viola Kijowska. Play as an interplanetary corporation, sending your research vessels into uncharted space to expand your knowledge, and power. Build your ship, research tech, and explore the galaxy for anything, or anyone, you can exploit. Alien Artifacts provides a true 4x experience in under an hour. With over 200 cards, Alien Artifacts offers players many scoring strategies and great re-playability.

Cry Havoc: Aftermath is the expands on the critically acclaimed Cry Havoc with new skills and structures to add even more re-playability to the game. Each faction receives 5 new skills and three new structures which nearly doubles the amount of unique abilities in the game. Additionally, this expansion introduces an alternate game mode which ensures each game lasts for 5 full rounds. When passing an event token, instead of removing it, new scoring abilities are introduced which allow players even more options to gain victory points.

Stronghold: Undead is a re-balancing of the original Undead expansion for the all-new Stronghold Second Edition. Dark forces are brewing and the Necromancer is at the gates. This expansion introduces rules for gathering mana, spell casting, and terror. Along with new buildings and abilities for the Defender, Stronghold: Undead includes a brand new map with new routes for the Attacker to breach the walls.

Portal Games is a publisher of award-winning games such as Imperial Settlers, Cry Havoc, Tides of Time, First Martians, and Neuroshima Hex. Founded in Poland in 1999, Portal Games has developed into one of the most renowned European game publishers and design teams. Their commitment is to produce only the highest quality Board Games That Tell Stories.