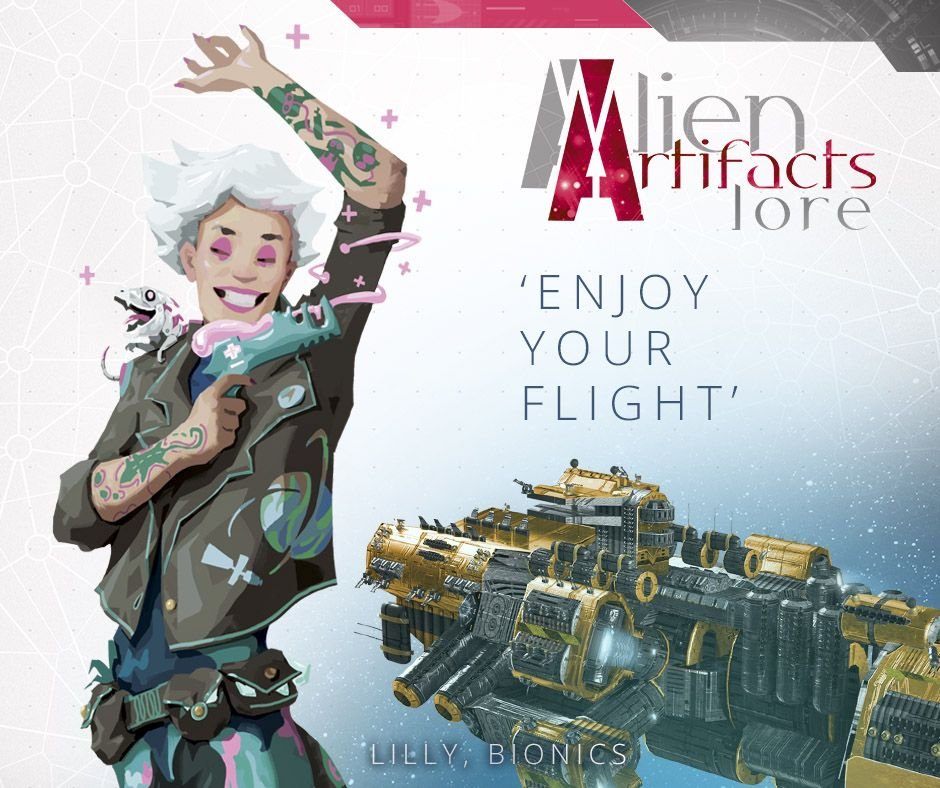 – Mommy, mommy, my glouwiee!
– Don’t worry, sunshine, it will be back shortly.
– But mommy, it’ll get lost there!
– Glouwiees don’t get lost, sweetheart. We’ll get it in a moment.
– My glouwiee….
Section 14 of the passenger orbital shuttle was starting to get crowded. All because of a young, perhaps eight or nine-year old girl, whose toy-pet fell under one of the chairs. The child stood in the middle of the passage, blocking all movement, while her mother desperately tried to convince her to get out of the way of the ever-increasing wave of people, that was getting closer and closer to the boiling point as they waited to take their seats. The holo-host, who projected right next to the kid and startled her enough that she started crying didn’t really help either.
– Hey, love. Do you know what glouwiees really like? – a man wearing an elegant sport suit addressed the girl from the opposite seat he was occupying, motioning to his own pet, stuck to his sleeve. – The glouwiees have tickles! Rub his belly and he’s sure to love it! – he demonstrated, evicting a series of giggles and wobbles from the blob at his garment.
– But I can’t reach him, ‘cuz he fell into a hole! – the girl replied, tears in her eyes.
– Let’s see. C’mon, let’s have a peek. – he winked to the woman and, dove between the seats along with her daughter.

Indeed, as soon as the girl leaned down and reached a hand out for her toy, the purple mass started, turned it’s great, dark eyes towards the child and then rolled over and climbed into her hands, following the owner-finding algorithms.
The entire trio – the girl, her mother and the man in a suit took the seats in their row while exchanging thanks and small talk. The human current resumed its movement.
“Cow Three”, Bionic Corvette, Fabien system, Union

– Here comes the birdy – Emma said, keeping a close eye on the listening post – alone, defenceless and without his mommy.
They have been stuck on passive observation, but not for much longer. Here, deep within The Union territory and away from front lines or pirate space – in the civilian area, a place where schedules and courses are enforced with iron discipline – the bionic corvette was akin to a fox in a henhouse. And, like a fox, it would vanish as soon as it got the job done.
– Kitties, get ready. Our star’s gonna be back in an hour and a half, our special guest with her. If ya can, hit the sack – the next chance to nap will not come anytime soon.

Lily wanted to dance as she slowly moved across the deck. Everything was going according to the plan, even if the all the plan entailed was surfing the waves of chaos.
She moved from one section to the other with no problems. Sure – the automatic security systems might have reacted to her – had she not hacked them during the previous voyage. Cameras? Didn’t display her. Sensors? Treated her like a ghost. Gates and doors? She assigned herself the role of a chief engineer with all access to the passenger section.
For the passengers, stuck quietly in their designated chairs she looked like yet another holoprojection, complete with the orange aura meaning she’s currently carrying out a top-priority task. She configured the holo-implants herself, so she knew she could count on them.
Someone from the crew might react to her, since they knew the holo-hosts couldn’t leave their sections. For example that sucker in the elevator knew…Well, he probably will report it after he comes to his senses…In four to six hours, if that mix she pumped him with wasn’t botched.
In front of Lilly was section fourteen, two hundred twenty passengers, including the one she came for.

The man sat next to the girl. Their glouwiees – his charcoal-gray, an adult version – and hers, bright purple – played patty-cake, one of the agility games implemented in their systems, which were supposed to engage both the living toys and their owners. The man cheated, so that the girl was always one win ahead of him. He kept his eyes on the passenger section the whole time.
The section, in which suddenly something changed. He sensed it, but couldn’t exactly put his finger on it. Everything seemed normal: the passengers in their seats, the adverts displayed above their heads, groups going to the bathrooms, holo-hosts wandering among them. One of them was coming his way, bland and pretty, exactly like the rest of them.
He glanced at the holo-host once again. He twitched when it ignored the cue from an older man sitting a couple rows to the left. Something was wrong. The holo-host sped up. He unfastened the belt securing him in his seat with his left hand and wanted to reach for his gun with his right…the same right that was still holding the modified glouwiee. He wouldn’t move his arm, held down by the soft but unyielding body of the living toy as if it were iron shackles.

He yanked when the host stopped right next to him, engulfing him in its projection. Close up he noticed something else under the hologram: a laughing girl?
He tried to grab her neck, stop the hands pricking him with something sharp. Injector! – he thought, terrified. He tossed frantically, trying to send out a distress signal – but he saw the signal status displayed on his bionic eye: no service, no connection. Each subsequent movement was slower, as if he was being consumed by sticky, paralyzing cotton.
– Mommy, look, the mister’s glouwiee is broken!
And indeed – from the holo-hosts’ projection field something rolled out on the ground. The small ball of an inactive toy-pet. The woman glanced at the holo-host, obscuring the other passenger with its projection. This wasn’t unusual: the passengers could have more privacy this way, for example make a private call or order some more elaborate service. The only odd thing about it all was that just seconds ago the “mister” was playing with her daughter.

The holo-host turned to them with a professional smile.
– I am sorry for the inconvenience. We will move Mr Simmons to a different seat.
– There’s no problem – she answered.
– Unfortunately, according to his ticket he should be seated in the adjacent section.
The host moved, leaving an empty seat. The man must have been still hidden in the projection.
Suddenly, the girl unfastened her belt and picked up the gray glouwiee from the ground.
– Mister! Don’t forget your friend!
The hologram reached out for the pet and hid it. The woman’s eyes widened with surprise. She didn’t think the holo-staff – virtual projections – could pick anything up.
– Thank you, sweetie. Enjoy your flight – said the holo-host and started walking away.
The woman stared in disbelief.
– Mooooommy, mommy, I’m hungry! – the child bellowed, and the woman looked at her daughter. Well, updating the holo-hosts wasn’t her responsibility – contrarily to this little person.

– President Hammond. Agent Deneuve, on return from mission at C-334. He was…intercepted.
The person at the opposite side of the desk, even though he was physically thousand miles away from president Hammond, looked like a pile of mess. The boy didn’t have to speak for Hammond to understand that the news were bad – bad enough that they delegated a scapegoat to deliver them.
– Who’s behind this? – he hissed.
– The investigation is ongoing and we don’t have….
President Hammond brought his fist down on the table with a thunderous rumble and shouted:
– I’m not asking about the investigation! Who did this?!
– M… Most probably the Bio… Bionics, Mr Pres… President.
The young corporate security officer picked the most probable option of the ones the analytics were considering. It wouldn’t help his crumbling career – but maybe if the guess was right – it might help him keep his job, any job with the company. With despair, he glanced at the president’s face, once again an impenetrable, motionless mask after the outburst of rage.
Forty seconds went by, forty seconds of cold torture, before the president finally spoke:
– The question is: what did he know? About the operation, about the spoils, about the constructs? Did Deneuve get through the post-op cleanse?
– The issue is, Mr President, – the officer swallowed audibly – that… that agent Deneuve still knows almost… almost everything.